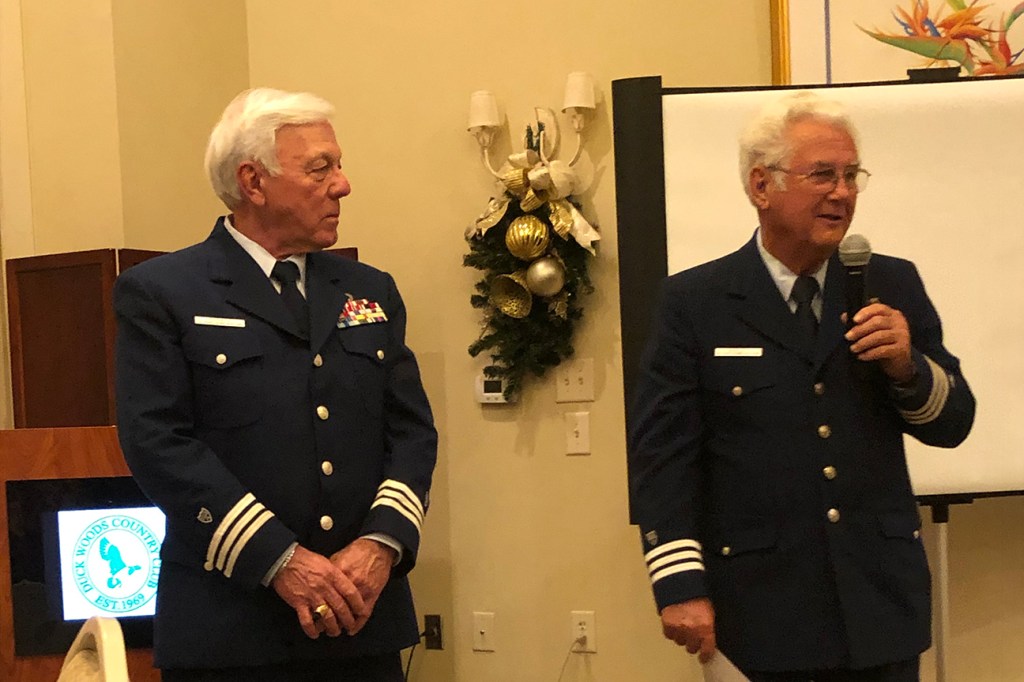 North Carolina Coastal Division of the United States Coast Guard Auxiliary observed the Change of Watch Ceremony marking the completion of four years of service by Wayne Earley, Division Commander. The leadership is now in the hands of Pat Harmon of Elizabeth City.

Earley began his division leadership as vice division commander in 2016 and has served as division commander, often handling all the work alone, after his election in 2017. Responsible for Coast Guard Auxiliary Flotillas in Elizabeth City, Plymouth, Cape Hatteras and the Outer Banks, his division has been responsible for more hours of direct on the water support for Coast Guard training than any other division in the North Carolina, Virginia or Maryland areas. His leadership was always face to face, traveling to all the monthly flotilla meetings in his division. Helping him complete his final year, Jim McKeever of Hertford stepped up and filled the vacant vice commander position.

Pat Harmon is completing two years as the commander of Elizabeth City Auxiliary Flotilla. He will be supported by Tim Baker, who will be his vice division commander. Harmon encouraged strong ties with the Coast Guard Air Station and the Boat Station while serving as flotilla commander. He stated his intention to continue that work as division commander. Because of the unique position of the North Carolina Coastal Division, the Auxiliary has direct opportunity to support the Coast Guard Boat Stations in Hatteras, Nags Head and Elizabeth City as well as the Aids to Navigation unit in Wanchese and the Air Station in Elizabeth City.

The Coast Guard Auxiliary is made up of civilians who volunteer to join a very unique group. Their mission, ratified by the United States Congress, is recreational boating safety. The United States Coast Guard has ultimate responsibility for the Auxiliary and welcomes them as part of their team. The Auxiliary wears the Coast Guard uniform proudly; the only difference between active duty uniform and Auxiliary is the silver thread in Auxiliary leadership devices. Members of the Auxiliary come from all walks in life, with military and without military background, expecting to serve in many capacities. Some have boats and love to be on the water, some do not and have no desire for on the water activities; all have a deep commitment to serve and be a part of America’s Volunteer Lifesavers.