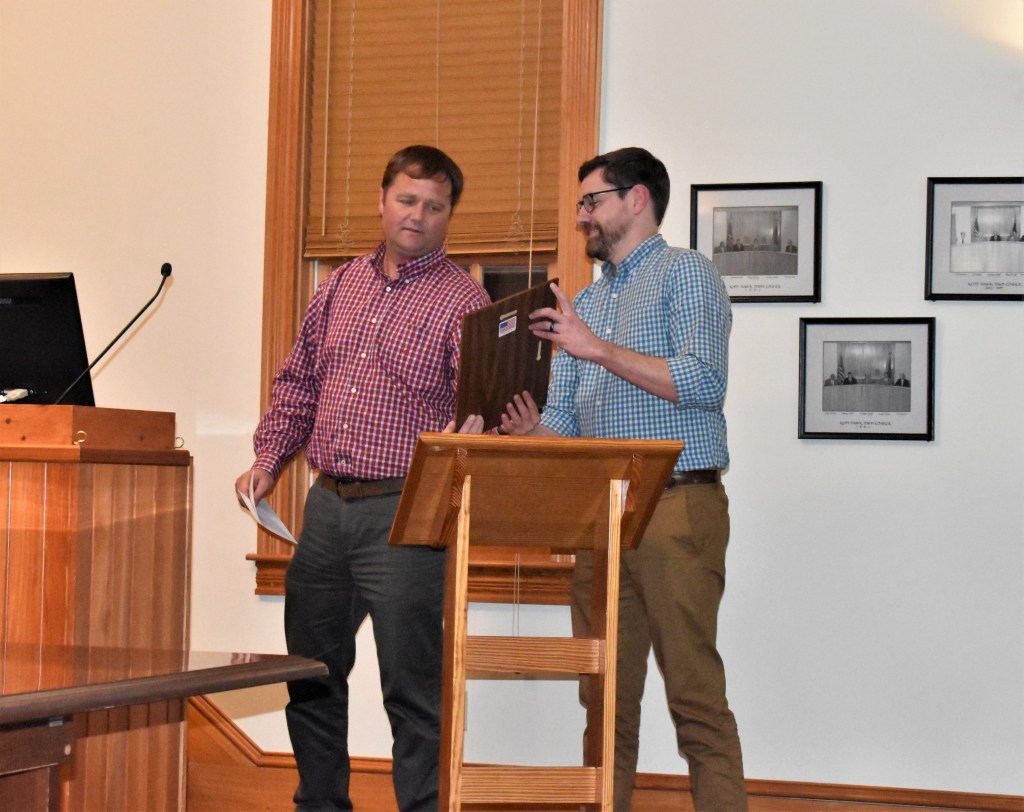 Planning director Rob Testerman was recognized for his five years of service with the town of Kitty Hawk. Danielle Puleo photo

Kitty Hawk town council members met on Monday, Jan. 6. Their agenda included an agreement with APTIM regarding a post-hurricane beach profile survey and a discussion of the newly planned library for Southern Shores.

Before moving into the action items, Mayor Gary Perry removed agenda item 8A, which dealt with scheduling a public hearing for the flood damage prevention ordinance. His reasoning for this removal was that upon review, the ordinance seemed “very complex, somewhat intrusive and also expensive for property owners.”

Perry said he did not want to rush things: “We need to slow this down, give the planning board some to do what they need to do and give us good advice,” he said. Perry also added item 9C, regarding plans for a new Albemarle Regional Library branch in neighboring Southern Shores.

During the presentations that followed, Ken Willson with APTIM Coastal Planning and Engineering came forth results from the second annual beach monitoring and nourishment project in Kitty Hawk. The project included surveys and analysis that documented the volumetric change in sand coverage along the beaches that extended from approximately 120 feet north of the pier at Hilton Garden Inn in Kitty Hawk to the area between E. Sibbern Dr. and E. Arch St.

Willson went on to explain that a majority of the sand (70%) was lost in the first six months, which he said was typical for a beach nourishment project. Between June 2018 and May 2019, Kitty Hawk beaches experienced an approximate 250,000 cubic yard loss in sand.

Within the past month, Willson has found a migrating hot spot around the bath house in Kitty Hawk, which he “wants to keep an eye on.” He also commented, “the sand fencing is working really well.”

Overall results from the surveys concluded in a discussion about future projects. “We want to start discussing with agencies the possibility of moving into a joint project with multiple towns,” Willson said. This would include the towns of Duck, Southern Shores, Kill Devil Hills and Kitty Hawk.

The council then considered an agreement with APTIM to conduct a post-hurricane survey and analysis services. “The survey requires FEMA to show that the sand lost was a result of Dorian,” town manager Andy Stewart said. If FEMA determines that the sand lost was caused by Hurricane Dorian, the town will be reimbursed; if not, the town will have only expended funds on the survey.

Perry made note that, “even if FEMA were to approve a set sum of money, that would not happen until such time that we did renourishment. It would be deducted from the cost of that re-nourishment.”

The council was in agreement that they wanted to proceed with the proposed contract for a post-Dorian survey. Lynne McClean made a motion to this effect and all were in favor.

Perry then touched on his added agenda item. Southern Shores has put a committee together to work on establishing a new branch of the Albemarle Regional Library System. After attending recent meetings, Perry confirmed a location has already been selected and funding for construction would have to come from the county.

Perry posed the question to the council: “Are we in favor of putting money and effort for another library or is KDH serving us satisfactorily?” All four other council members were in agreement that they did not feel this was the right time for Kitty Hawk to participate in this endeavor. “We have our own infrastructure to get in place; a library is not part of that infrastructure right now,” McClean said.

Also during the meeting, Perry was nominated to serve as the Recreation Committee liaison for the town and planning director Rob Testerman was recognized for his five years of service to Kitty Hawk. Testerman was described by Stewart as a “quiet leader” and a “big help to the town” by Perry.