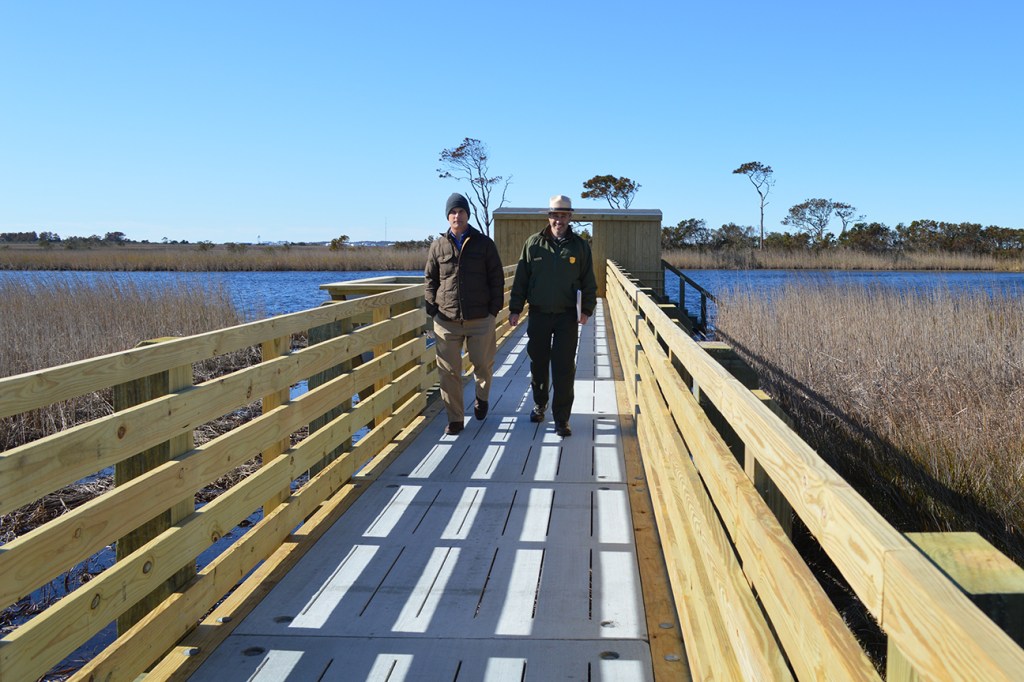 Building the Bodie Island Marsh Blind was a “collaborative project,” reports Monica and Scott Small with LSI Marine Construction LLC of Kitty Hawk, the subcontractor in charge of building the blind. Concrete panels were made by Carr Precast in Dunn. The aluminum handrails were fabricated by Dail Co. in Snow Hill. All other materials were purchased by Kempsville Lumber in Point Harbor. Hardware was supplied by Sea Port Marine, in Chesapeake, Va. Newbern Concrete, Inc., Harbinger, built and striped the parking lot. The blind was officially opened Dec. 3, 2019. On that day, Lee Nettles, executive director of the Outer Banks Visitors Bureau, left, and Cape Hatteras National Seashore Superintendent David Hallac walk back from the blind structure. Mary Helen Goodloe-Murphy file photo

At the start of 2019, the federal government shut down. This longest-ever shutdown lasted two months. That was not an auspicious beginning for the Cape Hatteras National Seashore or Wright Brothers National Memorial or Fort Raleigh National Historic Site.

In the Cape Hatteras National Seashore, the shutdown and some vandalism propelled incredible community support. Calls for volunteers went out from beach-caring organizations. Volunteers emptied trash cans at ramps and visitor centers and picked up litter from Whalebone Junction to the tip of Hatteras Island.

Visitation increased at Wright Brothers but decreased at Fort Raleigh.

Other events of note include a 50-vehicle parking lot constructed at Kite Point; a fourth lifeguard station set up at Frisco bathhouse; a pavement restoration project proceeded; a special hunting blind for the mobility impaired opened Dec. 3; a celebration of surf fishing held Nov. 2.

The fall’s one-two punch from Dorian and Melissa hit the Cape Hatteras National Seashore particularly hard. Dorian caused at least $5 million in damages. On Ocracoke, 12 of the 13 park service vehicles were destroyed. The double keepers quarters at the Ocracoke lighthouse was badly flooded, leaving seashore managers in a quandary about what to do with the historic structure. To repair staff housing on Ocracoke, the estimate is $400,000.

For 2020, National Park Service staff will be working on Hurricane Dorian recovery.

And, on Dec. 16, 2020, the Cape Hatteras National Seashore will celebrate the 150th anniversary of the first lighting of the Cape Hatteras Lighthouse, which will be undergoing a comprehensive restoration in the near future.