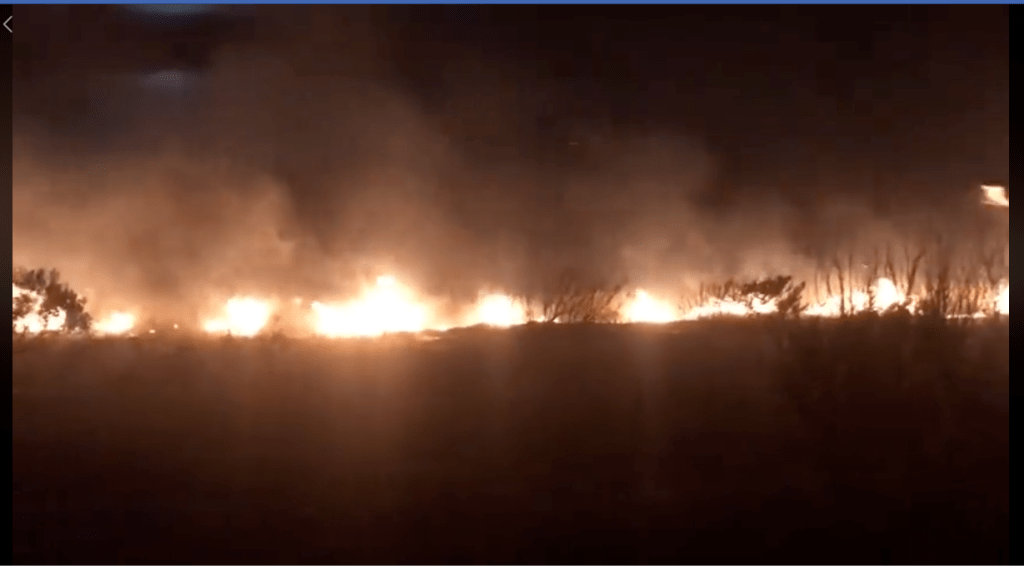 A brush fire flares in Pea Island National Wildlife Refuge. The fire was south of the refuge visitor center on the oceanside of NC 12. The fire consumed 2.5 acres, but quick response by volunteer firefighters from Chicamacomico Banks and staff from NC Forest Service and the refuge kept the fire from jumping NC 12. Courtesy U.S. Fish and Wildlife Service.

At 6:32 p.m. on Saturday, Jan. 11, an emergency call went out for Chicamacomico Banks volunteer firefighters for a brush fire in Pea Island National Wildlife Refuge.

Avon volunteer firefighters were paged out to cover Rodanthe, Waves and Salvo. Avon responders were released about 30 minutes later.

Because of the fire’s proximity to NC 12, the highway was closed to protect firefighters and equipment. Initially, an engine and a car with emergency lights were positioned to stop traffic in both directions.

Firefighters initially attacked the north end of the fire and stopped the advance and kept moving south.

Local volunteers returned to the station two hours after the call. The crew finished the call around 10:30 p.m. Saturday night by filling trucks with water, cleaning equipment and putting the equipment back in service. At Monday night training, volunteers cleaned hose used during the brush fire.

The fire covered 2.5 acres. Fire manager for the U.S. Fish and Wildlife Service refuges Bert Plante determined that smoking materials may be the cause of the fire. Three service firefighters also responded to the blaze with two tracked marsh masters, which were not used.