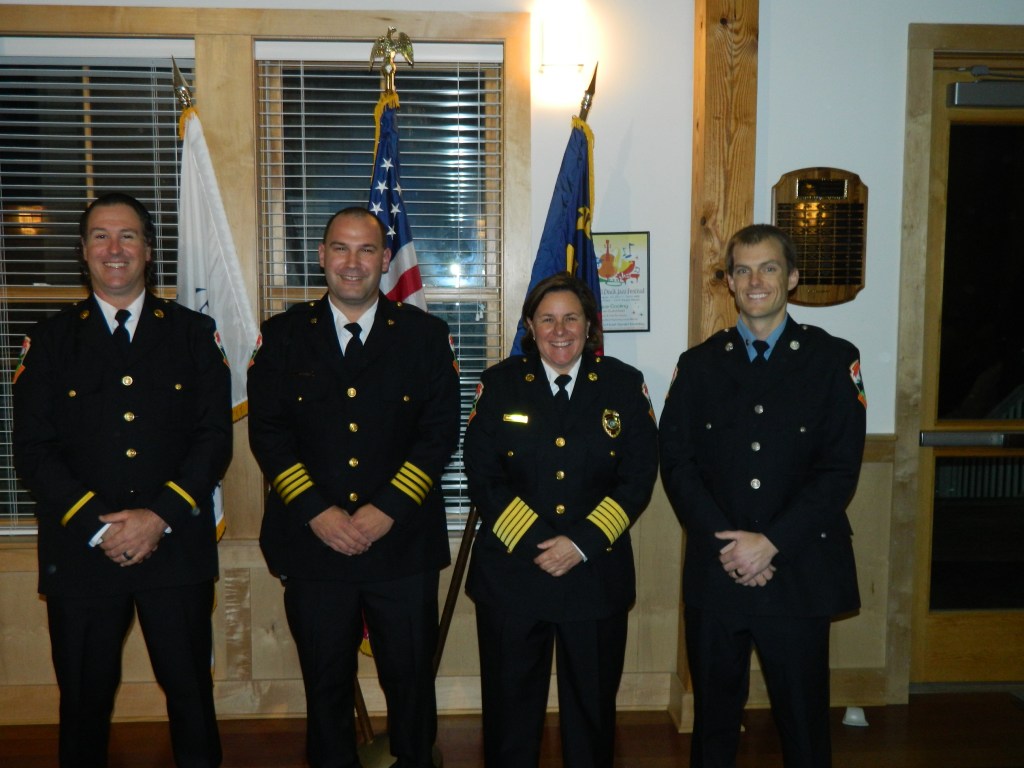 Duck Fire Chief Donna Black, third from left, announced at the January 15 Duck Town Council meeting that, from left, Anthony Bartolotta has been promoted to captain, Trey Batschelet had been promoted from captain to the deputy chief position, filling a vacancy that resulted from the retirement of Bill Walker, and Matt Munden had been hired to be a Duck paid firefighter. Philip S. Ruckle Jr. photo

Faced with several candidates vying for a single vacant Planning Board position, the January 15 Duck Town Council meeting could have run for several hours before settling on one name.

A lengthy selection process was averted on the first ballot, however, when Randy Morton emerged as the candidate receiving the most votes.

It was the election of Sandy Whitman to a Duck Town Council seat in November that created a Planning Board opening.

With no set process spelled out for council when making appointments to fill Whitman’s unexpired term, Mayor Don Kingston suggested in December that interested parties submit applications and, based upon the number, council could choose the individual in open session at the January meeting.

The candidate list included both full and part time residents who had varied educational backgrounds and work experiences.

In the crowded field were a business and marketing executive, international supermarket chain executive, CAMA Land Use Plan Advisory Committee member, a practicing attorney, retired Naval officer, a Realtor and an architect. Several listed holding homeowners association leadership positions and at least one had a previous town council position in another state.

Almost all listed some type of volunteer service with Duck or some other municipality.

“This is hard,” said Monica Thibodeau in reference to the selection process.

Nancy Caviness also thanked all nine for their willingness to commit their time to the town adding, “We are a lucky town to have a population with this background.”

After several candidates in attendance were given time to make brief statements, Kingston opened with the nomination process by nominating Randy Morton.

Asking Council for their nominations, Whitman also nominated Morton. Moving to the others, Caviness added Robert Wetzel to the list, Thibodeau nominated John Pucciano and councilman Rob Mooney named Jay Blose, completing the list of four nominees for the one position.

The actual vote on the candidates saw each council member vote on their own nominee, which gave Morton two votes to one each for the others.

During his comments to the board, Morton said he and his wife have visited the area since the late ’80s, purchasing a lot in Duck in 1989 which later went to his parents. The Mortons bought a house in 2007 and moved to Duck full time in 2013. Listing a number of volunteer activities, Morton has helped with the Jazz Fest, Yuletide, beach grass plantings and Dare County Crime Line. His application listed his background career as being in information technology.

Morton’s selection as a regular Planning Board member now opens up a Board of Adjustment position.

Duck will be accepting applications for a March selection. The eight Planning Board candidates were advised, if interested, on how to keep their name in the pot for the Board of Adjustment position.

Making it a night for filling vacancies, Duck Fire Chief Donna Black was added to the evening’s agenda to announce that Duck Fire Captain Trey Batschelet had been selected to fill the deputy chief position that resulted from the retirement of Bill Walker.

According to Black, Batschelet began his firefighting career with Southern Shores Volunteer Fire Department in 2008, he then worked as a paid firefighter in Elizabeth City and came to Duck as a volunteer in 2010. Duck hired Batschelet in 2015 and he was promoted to captain in 2016

Batschelet’s promotion created a vacancy as captain and Black then advised that Anthony Bartolotta was selected to fill that spot. A Duck Fire Department member for 18 years, Bartolotta worked briefly for Nags Head before coming on board at Duck as a paid firefighter in 2009.

Black went on to say in recent years Bartolotta has shown considerable interest, commitment and desire that helped lead to his promotion to captain.

Bartolotta joins Jared Smith and Jeff DelMonte in that position.

The final firefighter announcement by Black was that Matt Munden had been hired to fill a paid position.

Black said Munden has volunteered with Duck a little over three years and joins Duck with extensive EMS experience.

Other business for the evening included passing a firearms ordinance change that brings the town’s standards into line with applicable state laws.

According to community development director Joe Heard, council approved other similar and related sections at a previous meeting and this is just another step in bringing town code into compliance with state law.

Heard went on to say even though there are no electronic gaming operations in Duck, there was a section of the zoning ordinance that prohibited firearms in those establishments, adding that there is no authority for the town to prohibit carrying firearms on private property.

Council also passed a consent agenda with minutes from the December 4 meeting and recording a $22,100 Governor’s Crime Commission grant.

Heard then provided council with a brief summary of the FEMA preliminary flood map approval process. Released in June 2016 for all of Dare County, the new maps must be adopted by the Town of Duck within six months and will become effective on June 19, 2020. Heard said the Planning Board will begin its review of the draft ordinance on January 22 with the hopes of sending a recommendation to Town Council for consideration by March.

Although the new flood maps show a significant reduction in the number of Duck properties located flood zones, area officials have repeatedly cautioned that low risk does not mean no risk and property owners are being advised to consider maintaining flood insurance.

At the end of the evening’s business, Kingston closed the meeting with an announcement that the next meeting will be February 5.