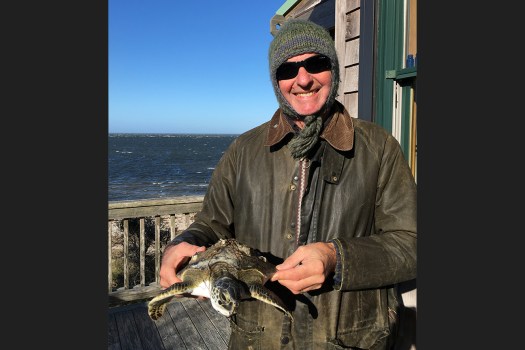 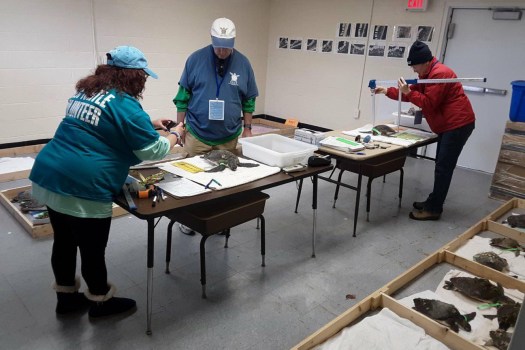 Volunteers with the Network for Endangered Sea Turtles and with the Outer Banks Center for Wildlife Education process each cold-stunned turtle before another crew of volunteers transport the sea turtles to the Sea Turtle Assistance and Rehab Center at the North Caroline Aquarium on Roanoke Island. Courtesy Hatteras Island Wildlife Rehabilitation 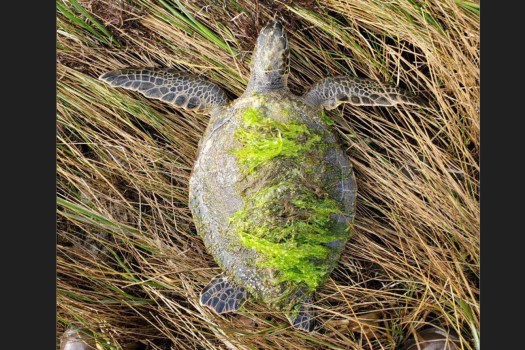 The little green sea turtle was taken to the staging area at the old Buxton Weather Bureau on Buxton Back Road. In the past three days, over 100 cold-stunned sea turtles have been found on Hatteras Island soundside shoreline. Courtesy Hatteras Island Wildlife Rehabilitation

Over the last three days, over 100 cold-stunned juvenile green and Kemp’s ridley sea turtles have been rescued by an amazing network of volunteers walking Hatteras Island’s soundside.

Frank Wells is the N.E.S.T. coordinator for cold-stunned events. He monitors weather and winds to predict when and where cold-stunned sea turtles will need help and when to call out the trained volunteers.

When the temperature reaches 50 degrees, these juvenile turtles weaken. When temperatures reach the low 40s, a cold stun event will likely take place. A north, northwest or northeast wind sends the floating sea turtles to the Pamlico Sound fringe on Hatteras Island.

And the wind was really blowing toward the southern shores of Hatteras Island.

On Jan. 21, 95 green and Kemp’s ridley cold-stunned sea turtles were found on the Hatteras Island soundside. Some 35 of those were found on Cape Hatteras National Seashore property.

Training is necessary to handle the sea turtles, which are all listed species. Kemp’s ridley sea turtles are endangered and the greens and loggerheads are listed as threatened.

N.E.S.T., which stands for Network for Endangered Sea Turtles, holds the permit for conducting the turtle-saving work. Training usually happens in the fall before the first event.

Volunteers transport the stunned turtles from the soundside to the staging area, which is the old weather bureau station on Buxton Back Road. Cape Hatteras Secondary School permits the sea turtle operation on the first floor of the station building.

Volunteers from N.E.S.T up the beach along with Karen Clark with the Outer Banks Center for Wildlife Education in Corolla arrive in Buxton to open and set up the staging area.

Volunteers show up with the sea turtles and intensive paperwork follows. That paperwork will follow the individual turtle online and in transport by another group of volunteers to the STAR Center at the North Carolina Aquarium on Roanoke Island. Each turtle arrives at that center in an individual container with the aforesaid paperwork.

At the STAR (Sea Turtle Assistance and Rehabilitation) Center, aquarium staff and N.E.S.T. volunteers work to rehabilitate the sea turtles for release into the warmer ocean waters.

Green and Kemp’s ridley sea turtles create only occasional nests on Cape Hatteras National Seashore beaches. Why are these two species of juvenile sea turtles are in Pamlico Sound?

Wells reports at a very specific point in their life cycle, these turtles move from the ocean to the sound. At around 3 or 4 years, the sea turtles leave the Gulf Stream where they have feasted on shrimp and small crabs for the Pamlico Sound, where the sea turtles change eating habits to sea grass.

This turtle-saving network on Hatteras Island is reportedly one of only two such networks along the United States coastlines. Cape Cod has a similar program operated by Audubon, reports Wells.

When the cold weather hits, untrained volunteers can help by walking the Pamlico Sound shoreline. Look for cold-stunned turtles in near-shore waters, in a marsh or along a small beach. If one is found, call one of the following numbers. All the numbers are part of the sea turtle-saving network. Someone will come to rescue the turtle.