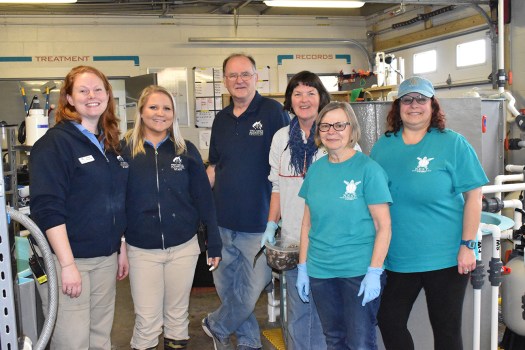 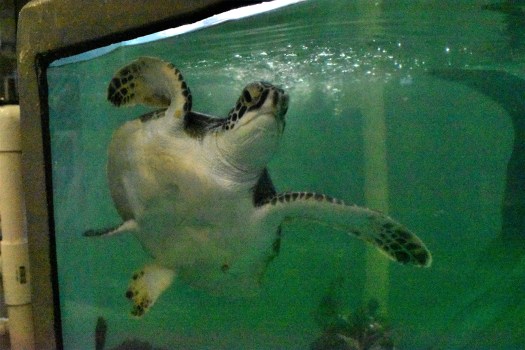 Cold-stunning events are happening all along the east coast and can affect any species of sea turtle. Danielle Puleo photo 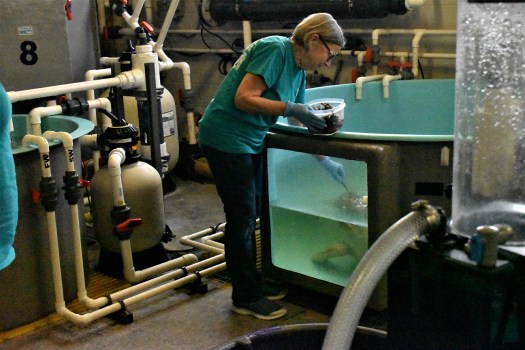 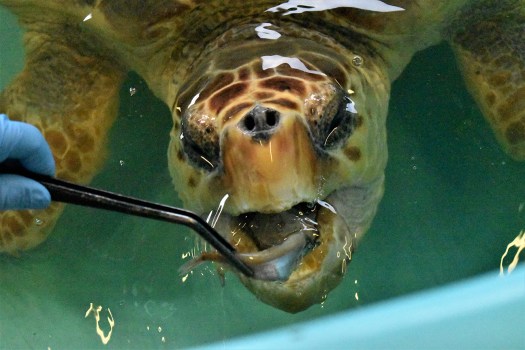 Harry Potter, a resident loggerhead that is being treated at the STAR center. Danielle Puleo photo 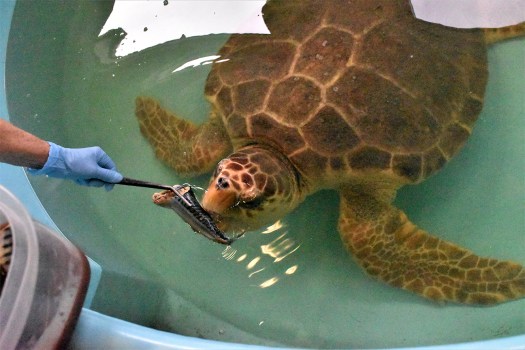 Harry Potter was brought in after swallowing an excess of sand after a nor’easter. Danielle Puleo photo 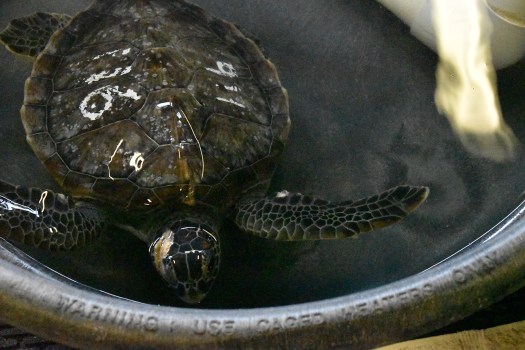 Sea turtles are like humans in that they get better at an individual rate, so all have to be monitored and accessed on a daily basis. Danielle Puleo photo 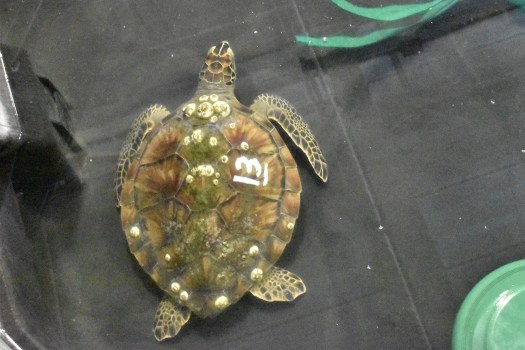 The STAR center is located at the NC Aquarium on Roanoke Island and is currently closed to the public due to a high volume of cold-stunned turtles. Danielle Puleo photo

Recent weather events have led to a surplus of cold-stun events for sea turtles in the Outer Banks. Once turtles are rescued by volunteers along the coast, they are transported to Sea Turtle Assistance and Rehab (STAR) Center at the North Carolina Aquarium on Roanoke Island, where they are monitored and cared for until they can be released.

Brian Postelle, public relations coordinator at the aquarium, said the STAR Center team has been “incredibly busy” this week. Currently, the center is closed off to the public because the walkway is filled with tubs of cold-stunned sea turtles.

Amber Hitt, STAR Center manager, said the center has about 160 turtles on-site right now. This was their second biggest cold-stun event this season, the other occurring around Christmas. Over the last two days, the center has received close to 120-130 sea turtles.

Postelle mentioned that the center is nowhere near over capacity despite the large volume of turtles that are under their care. In the past, they have had about 600 turtles on-site at one time.

Closing down the STAR Center to the public is the first step in accommodating the sea turtles, Hitt said. Next on the list taking over the bathrooms and then shutting down the operation center and other parts of the aquarium.

“We would take in any that were brought to us,” Hitt said. The STAR Center has open communication with other aquariums along the east coast. In the past, turtles have been transported to Georgia and Florida if the aquarium experiences an extreme surplus of cold-stunned turtles. “Communication and planning are the biggest things that you can do in this kind of event,” she explained.

Planning is something that the STAR Center is very used to. Hitt said they keep track of when cold-stunning events start to occur in New England and prepare for turtles to start washing up in the Outer Banks. “It’s like a big wave,” she explained. Cold-stunning happens all along the east coast.

Cold-stunning is defined as any significant drop in water temperature that is quick enough that the turtles cannot compensate. “Their bodies cannot adjust in time, so they experience hypothermic symptoms,” Hitt started, “that could be anything from just lethargy, saving energy that is needed to keep their insides functioning and not swimming as much.”

Once received by the STAR Center, the turtles are assessed by volunteers and staff and given the proper fluids. The goal is to maintain their normal functioning levels.  “We take over the outdoor bathrooms and start to slowly warm them up,” Hitt said. She mentioned that the staff can only warm up the sea turtles by a few degrees a day.

Sea turtles are much like humans in that some can recover faster than others. It depends on the turtle and what kind of shape they are in once received by the STAR Center. Hitt said she can have turtles stay in their care anywhere from a few weeks to a few months.

Cold-stunning is a sea turtle-wide occurrence that can affect all species. The center has received mainly green, Kemp’s ridley and loggerhead turtles thus far. As far as this area goes, Hitt said they usually see smaller turtles rather than larger ones. Although she does not have a specific answer as to why this is the case, she has some speculations.

“I think we have a lot of good food here, both soundside and oceanside for sea turtles,” she said. Green sea turtles feed on the seagrass that cover the sound’s floor and Kemp’s ridley and loggerheads feed on shrimp, blue crab and horeshoe crabs. “Unfortunately, because of how long it stays warm here, I think it’s just them sticking around as long as they can to get the good food,” Hitt said.

Hitt admitted that the center could not accommodate all these animals without the help of volunteers. The center works with N.E.S.T., the Park Service and the Coast Guard to rescue and release the turtles. Volunteers are trained on how to care for and handle the turtles and staff handles the medical work by drawing blood and performing examines and assessments.

The STAR Center encourages anyone looking to help to volunteer. They also have an Amazon “wish list” set up for anyone wishing to contribute supplies that the center is in need of. The list includes everything from holding tubs to gauze, syringes or cleaning supplies. Even bigger-ticket items like PVC tubes for heating are on the list. To donate, visit their wish list at www.amazon.com/registry/wishlist/3UKEI8SW68Y8W/ref=cm_sw_r_cp_ep_ws_7Yy9BbYN7JW4Q.

Hitt said it truly takes a village to handle these cold-stun events. For more information on how to get involved, visit http://www.ncaquariums.com/roanoke-island.