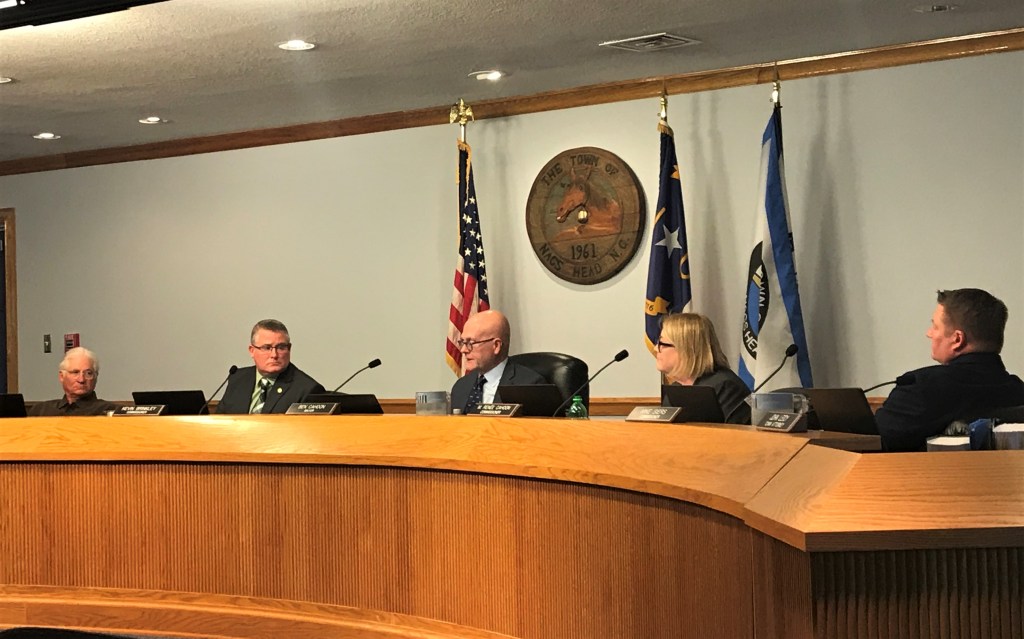 On Wednesday, Jan. 8, the Nags Head Board of Commissioners met to review two major plans, one for the Christmas Mouse and another for the Coastal Villas. Consideration of the site plan for Gone Coastal Shopping Center was requested to be continued in March by the applicant.

The main topic of discussion was the 17-lot subdivision known as Coastal Villas, planned to be constructed on the west side of US 158, about 300 ft. south of the intersection of W. Soundside Rd. and US 158. This subdivision would cover approximately 9.86 acres and is zoned R-2, medium density residential.

Thirteen residents came forward to speak during public comment, twelve of which addressed the proposed subdivision.

Jim Troutman, a resident of South Ridge, came forward first. Troutman said he had no problem with the subdivision, but his reservations were with the planned access. “My concern is for safety and our emergency vehicles,” he said. Troutman commented on the six turns it takes to get from the highway to his home in South Ridge. He felt this would cause issues for emergency vehicles.

Theresa Cassidy followed up Troutman’s concerns with her own: “there’s no curbs, sidewalks or even clear paths for us to get off the road,” she said, referring to Deering St., would act as the access to US 158 from this subdivision if the proposed plan were to be approved.

David Kravitz brought up the concept of “unintended consequences” to the board. “It almost seems like there should be two accesses,” Kravitz said. Troutman, Cassidy and the other residents that spoke about this planned subdivision were in agreement that another access directly from US 158 was needed before approval.

After hearing the public concern, the commissioners deliberated amongst themselves and with planning director Michael Zehner. Zehner’s ideal condition was access off of 158 and also through Mariner’s Way. “This might allow for traffic to be broken up,” he suggested. Staff, however, cannot make that requirement.

During deliberation, it was found that there was discrepancy within the plan. Sheet 1 varied from Sheets 2 and 3. Zehner said the planning staff was unaware of this discrepancy and Sheet 2 and 3 should be referenced.

Commissioner Mike Siers asked Zehner to explain the infiltration basin situation. Zehner said overflow from the basins would travel through natural channels to the neighboring wetland system that was already in place. There would be no direct discharge to the sound, Zehner confirmed.

Mayor Ben Cahoon posed a question to attorney John Leidy: “What extent can the board exercise safety concerns outside of staff recommendations?” Leidy said that it is ultimately up to the board to approve that ordinance standards have been met. The board can either approve an application as submitted or impose conditions that are acceptable to the applicant.

Commissioner Webb Fuller asked Deputy Fire Chief Shane Hite whether upon technical review, the plat met all requirements for public safety. Hite confirmed that the plan did meet all requirements. He added that despite the travel time concern, the fire department cannot require additional stipulations within the ordinance.

Lastly, commissioner Renée Cahoon voiced her concerns. “We need to be thinking about how we progress as a town,” she said. Commissioner Cahoon felt it was best to work together as a town to bring people together, get property owners involved and figure out a way to develop access that does not subject the new subdivision and surrounding residents to safety hazards.

To this effect, commissioner Cahoon made a motion to table the consideration of Coastal Villas until March. Fuller asked for clarification from Leidy as to whether this motion was legal, referring to the two-month table time. Leidy later confirmed that as long as the consideration will take place within a 90-day period, which it does, it is a legal motion.

The motion carried unanimously, and the board moved on to considering the major site plan for Christmas Mouse.

There was little discussion from the board before commissioner Cahoon made a motion to approve the final plans of the reconstruction. All were in favor.

Fresh Fit Café: On the road to healthy living, one meal at a time

Fresh Fit Café: On the road to healthy living,…