Red Wolf Revival: Addressing a species in danger of extinction

On Friday, Jan. 24, a group of representatives from the U.S. Fish and Wildlife Service, NC Wildlife Resources Commission, Wildlands Network and Red Wolf Coalition sat down with the public to talk about the realities of the dwindling red wolf population in North Carolina.

The meeting began with brief 2015 documentary which recapped the history of the red wolves and the challenges the population has faced since their reintroduction in 1987. After 14 red wolves were identified and captured in the Texas/Louisiana borders at the time, they were relocated to the Albemarle Peninsula. It was the first time in history that a predator had ever been re-introduced into the wild anywhere in the world.

Since their reintroduction, the coyote population has been on the rise and with their ever-growing numbers, they now occupy the same protected land that the red wolves reside. This along with the large amount of human-caused mortalities to red wolves has decreased the population in NC to a startling twelve individuals.

Since the documentary was released in 2015, red wolves have been listed as a “SAFE” (saving animal from extinction) species. The Red Wolf Center in Columbia has reopened and a court ruling placed a permanent injunction against capturing or killing red wolves without first showing that they pose a threat to human, livestock or pet safety.

The twelve known red wolves have been collared and are being tracked by USFWS. Panelist and representative with USFWS Joe Madison suspects there are a few more out there, rounding out the total population to an estimated twenty wolves.

Madison also reported that 2019 was the first year there were no red wolf pups born. Five mortalities were recorded in the last twelve months: two by vehicle strikes, one by gunshot, one by suspected gunshot and one of unknown causes. There are also no breeding pairs currently available in NC.

The U.S. Fish and Wildlife Service has been updating the red wolf recovery plan. Currently, they are developing some breeding pairs in an island off the coast of Florida.

St. Vincent Wildlife Refuge is an island propagation site for red wolves. There is a pair of red wolves that lives in a contained area there with offspring. Madison explained that his team is working to capture those pups once they are of age to take back to NC for reintroduction once again.

The lofty goal at the end of this plan is to essentially have three breeding pairs of red wolves from St. Vincent and the areas around the Albemarle Peninsula. “We have been trapping every day since December 3,” Madison told the crowd. Although the team has had some success, not many canids captured have been red wolves.

Madison explained that trapping these creatures has not been easy, given the fact that all collared individuals have been captured before and are “on to them.” “They’re very savvy as to what we’re trying to do,” he said.

Host Kendall Smith with USFWS posed the question to the panel as to what misconceptions they thought are most common when it comes to the red wolf. Panelist Kim Wheeler with the Red Wolf Coalition had a simple answer: fear.

Wheeler explained that in her 15 years of working with the coalition, she had met many individuals that expressed their fear in wolves. Her background in education has led her to understand that red wolves operate in a family unit and do not kill for the sport of it. Getting this across to the public has been a challenge. She added, “I think fear is one of the biggest challenges behind tolerance of humans.”

Panelist Andrea Shipley, a mammologist with NCWRC agreed: “Never have I had an experience where I felt like my life was in danger.” Shipley has worked closely with these animals in the trapping aspect with wild and captive red wolves. She and Madison have worked together on the updated plan for red wolf recovery.

Another common misconception that was addressed is that coyote hunting will decrease their population size. Shipley spoke to this: “Coyotes have an amazing life natural history strategy where when you really come down hard on an area where there is a big coyote population, what ends up happening is that it triggers females to produce more pups that end up surviving.”

However, the big question of the night was what is the main reason the red wolf population has reached the striking number that it is today? Madison’s response was that human-caused mortality has taken a huge toll on the population. The documentary noted that up to 10% of the population was being lost to gun violence every year.

No matter which way you look at it, the panel was in agreement that red wolves are in serious danger. One panel member, local Hyde county resident Marty Brill, recounted his experience with red wolves. He has lost some roosters to a red wolf, which he later found out was due to the animal being injured and separated from his pack.

He later watched two red wolves get shot by hunters during the daytime, after he noted how “beautiful” they were crossing the landscape where he lives.

After a question from the audience asking when the team would consider the plan a success was posed, Madison shared that the long-term plan includes reintroducing red wolves to other parts of the country.

Right now, there are 256 red wolves in captivity. “We want to increase that to 400 over the course of next several years,” he said. No sites have been chosen for reintroduction, but the focus for the future of red wolves does not just include North Carolina.

For more information on red wolves and the USFWS plans for recovery, visit their website at www.fws.gov/southeast/wildlife/mammals/red-wolf/. 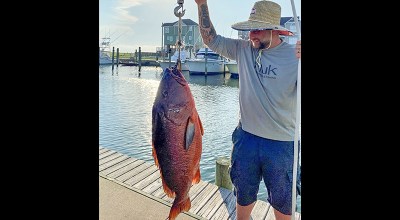