Construction of a new artificial reef, AR 165, is underway.

On Monday, Jan. 27, Tugboat American was in place about eight nautical miles south-southeast of Oregon Inlet and ready for sinking.

The Tugboat American has been striped, reports Tim Mullane with Coleen Marine, Norfolk. The boat was built in 1951 in Baltimore, Md., the only one of its type. It was called G&E No. 3. It was sold in 2003, 2006 and finally in 2008 to Coleen Marine, which used the tug for reef-building until 2012. The American, which is 88 feet long, was retired due to new regulatory requirements.

The tugboat is “diver safe,” says Mullane. “With nothing sticking out,” said the upbeat Mullane, “it’s a good wreck.”

Two more tugboats are slated for the reef: the America, which is 104 feet long, and the Valley Forge, 110 feet long. All were built in the 1950s.

This new artificial reef is a project of the Oregon Inlet Artificial Reef Committee of the Outer Banks Anglers Club. OIARC is chaired by retired judge J. Richard “Dick” Parker, who said he was “so happy” waking up today and realizing that his hard work and continual efforts had paid off. 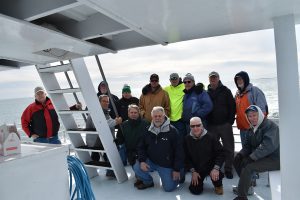 Members of the Outer Banks Anglers Club that came together to witness the start of their artificial reef project being completed. Danielle Puleo photo

For four years, the committee pursued financing and permits. An approximate $880,000 grant for building the new reef was awarded to the committee by the North Carolina Division of Marine Fisheries.

Originally, the project called for two tugboats, but the contract was changed to three after the committee realized they would still be within budget. The reef will be built in one phase.

The reef will be situated in 67 to 72 feet of water in an area of about 162 acres, which is like most other artificial reefs in the state’s network. It will be circular in shape and have a diameter of about 3000 ft. Approximately 7,000 tons of concrete will be placed at the reef site to help hold it in place.

Steven Hachtman, Anglers Club member, described these reefs as “fish magnets.” After about a few months, Parker said he expects to have fish visiting the area to feed on the shrimp, crabs and other organisms that will occupy the area. Hachtman noted, “if we had more of them, we would have more opportunities for near-shore fisherman.”

AR 165 will be one of five artificial reefs off the coast of Dare County, approximately situated eight miles south of the Oregon Inlet sea buoy, within three miles of the coast.

Around 7 a.m. on Monday morning, members of OBAC along with Oregon Inlet charter captains boarded the Crystal Dawn in Pirate’s Cove Harbor and set off to the site of this new reef. 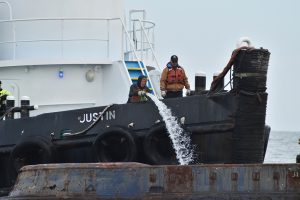 Onboard was owner the of T.W.’s Bait and Tackle, Terry Stewart. Stewart had donated funds to the artificial reef project and was in support of it since the beginning. “T.W.’s was real instrumental in helping fund this,” Hachtman commented.

After about two hours, the Crystal Dawn arrived at the marked location, greeted by Tugboats American and Justin, as well as the NC Marine Patrol. Everyone aboard gathered around to watch the crew release the tows from Tugboat American and begin the sinking process.

The forepeak of the American was pumped with seawater from a hose until it was about 65% full. The forward hold was then filled until it was about 50% full of seawater. The fuel tank was kept dry with the manhole open and unobstructed.

Once the crews had pumped the American full, it sank within seconds. AR 165 was on its way to completion after almost five years in the making.

Captain Tony Tillett was on board the Crystal Dawn after being invited by Parker. Tillett has the reputation of being the oldest captain out of Oregon Inlet, having been fishing in these waters for over 60 years. Tillett said he thought the reef would be “an asset to everybody” and was glad he had the chance to witness the events of the day.