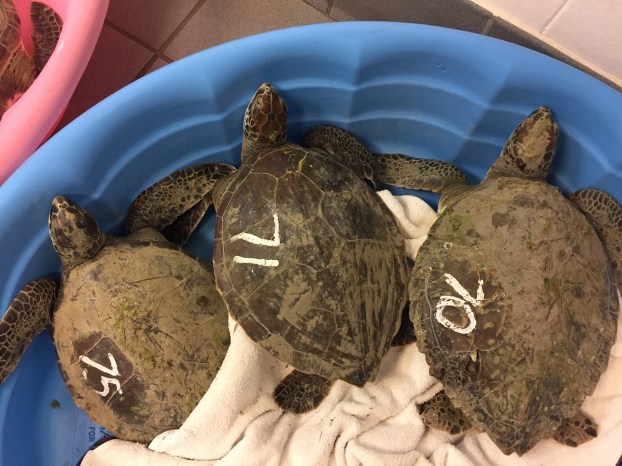 Courtesy of N.C. Dept. of Natural and Cultural Resources

Recent weather and cold temperatures have contributed to a large number of cold-stunned sea turtles needing rescue and treatment in North Carolina. Many of the turtles were transported to the North Carolina Aquarium at Roanoke Island’s Sea Turtle Assistance and Rehabilitation (STAR) Center. The number of sea turtles in their care recently increased to 178.

Veterinary staff at the N.C. Museum of Natural Sciences offered to help. This week, eight green sea turtles were transported from the STAR Center to the museum in Raleigh, where they will be monitored and cared for over the next few months by head veterinarian Dr. Dan Dombrowski and the museum’s Living Collections staff.

“We’re happy to have this opportunity to assist the aquarium with this conservation action effort,” said Dombrowski. “Sea turtles are such an important species to help rehabilitate. They are able to live so long, if we can help these juvenile turtles today, they may be around for another 100 years and produce thousands of offspring for the future.”

Courtesy of N.C. Dept. of Natural and Cultural Resources

Cold-stunning is a condition which is similar to hypothermia and is caused by dropping water temperatures. The condition renders the turtles unable to swim properly. The recovery process begins by gradually warming the turtles back up over the course of a few days.

The turtles will occasionally be on view to visitors while receiving veterinary care at the museum’s “Window on Animal Health.” Follow the museum on Twitter @naturalsciences for more information.

Once the turtles are deemed healthy enough to release, they will be taken offshore and released into warmer waters.   The N.C. Museum of Natural Sciences is just one of many institutions across the state assisting in this crucial effort to aid cold-stunned sea turtles. The effort to rescue and rehabilitate sea turtles is led by the N.C. Wildlife Resources Commission, which has collaborated with many federal, state and private organizations in the effort, including the North Carolina Aquariums and Jennette’s Pier, Center for Marine Sciences and Technology, North Carolina State University College of Veterinary Medicine, Cape Lookout National Seashore, Karen Beasley Sea Turtle Rescue and Rehabilitation Center, Cape Hatteras National Seashore, Hatteras Island Wildlife Rehabilitation, U.S. Fish and Wildlife Service, National Oceanic and Atmospheric Administration and National Marine Fisheries Service. Many volunteers and groups such as N.E.S.T. aided in the rescue of these turtles.

On Jan. 22, the Kill Devil Hills commissioners and planning board members came together for a work session on a... read more

States push jobless from virus recession to return to work