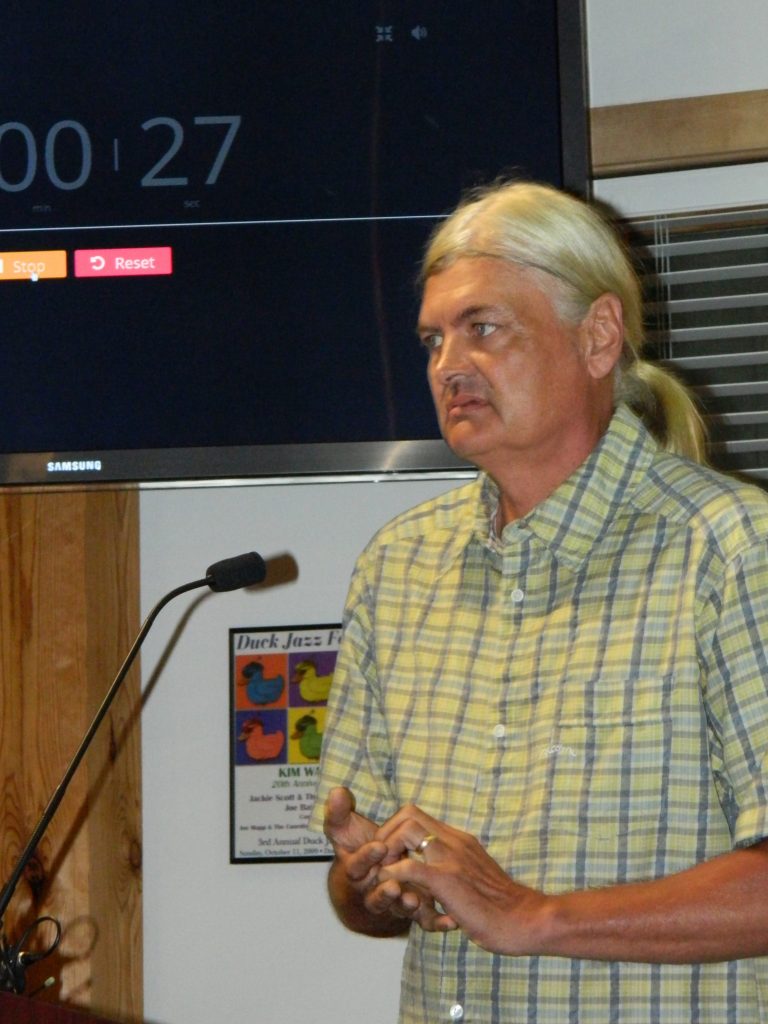 Bob Hovey was at the June 5 Duck Town Council meeting to say there is a need for public accesses in Duck for business owners and their employees. Philip S. Ruckle Jr. photo

N.C. Superior Court Judge Lamont Wiggins granted summary judgment February 14 in favor of Bob and Tanya Hovey, owners of Duck Village Outfitters, ruling that a Sea Breeze beach access in Duck is in fact within the town’s jurisdiction and dedicated to public use.

The case was part of a long-standing dispute between Bob Hovey and the property owners of the Sand Dollar Shores subdivision.

As far back as August 2016, Hovey asked the Duck Town Council to open beach access locations in town to the public. The Town of Duck has consistently maintained that all the accesses are privately owned.

Although North Carolina courts have consistently ruled that beaches are public, by the time Duck was incorporated in May 2002, oceanfront property other than the U.S. Army Corps of Engineers Field Research Facility had been platted as private property, with most in subdivisions governed by homeowner associations.

In May of 2019, Hovey was arrested and charged with second-degree trespass on the Sand Dollar Shores Homeowners Association walkway. A video of the incident made the rounds on social media, drawing considerable attention.

Hovey was at the June 5 Duck Town Council meeting to repeat his plea for public accesses in Duck. Hovey maintained that he believed several accesses were deeded to the public and said he had deeds.

In August, Hovey filed suit against Sand Dollar Shores HOA and the Town of Duck, arguing that the walkway is public property. In January, the parties entered into a consent order in which Hovey and the HOA agreed with the Town of Duck that the dispute was between the two parties and not Duck. In exchange, the town agreed that whatever came from the ruling would stand and be abided by.

In the Dare County case heard in Camden County Superior Court without a trial, Judge Wiggins said, “It is declared that the ‘8’ pedestrian beach access easement . . . is an easement dedicated to the general public for the purpose of providing pedestrian access to the Atlantic Ocean beach held in the public trust by the State of North Carolina and is now in the jurisdiction of the Town of Duck.”

When contacted after the ruling, Hovey told The Coastland Times, “We finally got a result that I’m happy with.”

Hovey said he had been using the beaches in Duck ever since he became a business owner 21 years ago and started advocating for the public beach accesses in Duck after he realized that there were public deeds associated with the accesses but no “public” access. He found the same problem with roads in the town of Duck.

“They passed an ordinance saying no parking was allowed on state roads,” Hovey continued, “however they continually allowed signs on public property reserving those spots for the people that live on the state road.”

According to Hovey, it seemed as though by ordinance Duck did not allow parking or usage of public property, but by permit, the properties were public.

“I like to think we reached a good starting point,” Hovey said, adding that he felt the ruling would mark a set of changes for the Town of Duck: “There is so much opportunity for the Town of Duck to step in and say, ‘Hey, this is public access and as a town we can enhance the community by making legitimate parking spots.’”

A press release from the Town of Duck in response to the ruling stated: “The town observed, but did not take a position on the summary judgment motion heard by Judge Wiggins at the February 10, 2019 hearing.”

In a statement released by Varnell, the association said: “It goes without saying that the HOA does not agree with the decision of the trial court, and they are hopeful that the North Carolina Court of Appeals will concur with this opinion. As part of the appeal, a stay of the trial court’s order will be sought in an effort to maintain the private nature of the access pending the outcome of the ruling by the Court of Appeals.

“The Sand Dollar Shores HOA will not address this legal matter through the use of social media, nor any other online outlets, as these mediums have shown to misconstrue and/or misrepresent the facts surrounding this case and further the vitriol within the entire Outer Banks community.

“We are thankful for the support we are receiving from numerous other Outer Banks communities and individuals who understand that this matter is not about restricting the public’s right to use the public trust beach, but rather about respecting private property rights legally established within the public record. This support acts to confirm the fact that the current ruling by the trial court affects many other Outer Banks communities, and communities statewide, and not simply Sand Dollar Shores.”