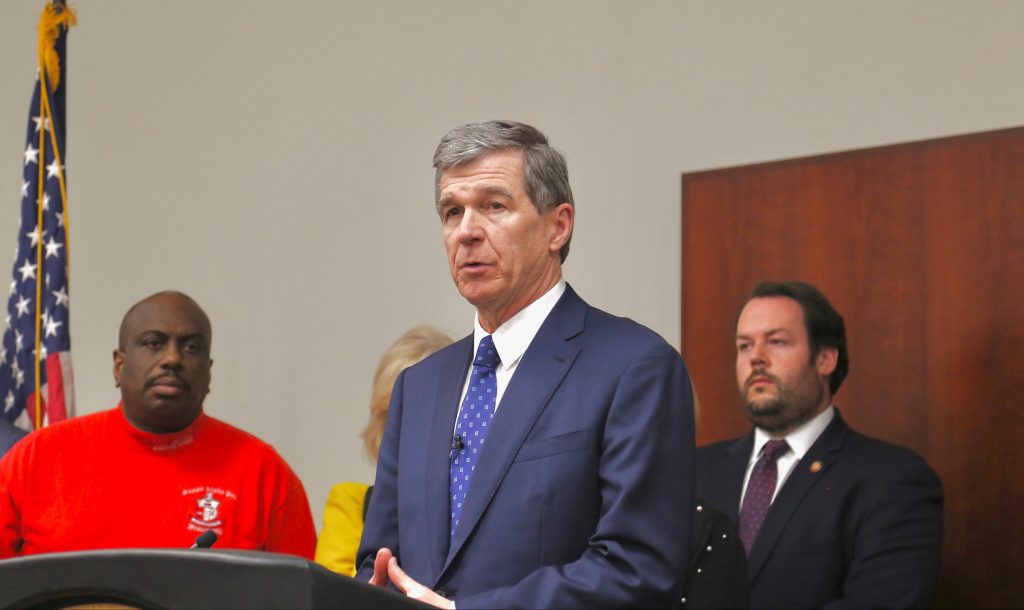 With North Carolina and U.S. cases of the coronavirus increasing, Gov. Roy Cooper on Thursday strongly discouraged large meetings and gatherings statewide to limit the magnitude of the outbreak.

Cooper and health officials recommended that, starting Friday, all meetings of more than 100 people be postponed, canceled or modified. Following the recommendation would likely lead to the cancellation of thousands of weekly church services, conferences, concerts and other social gatherings.

North Carolina had at least 15 residents testing positive for COVID-19 by late Thursday — nearly double the total from earlier in the day. And health officials said the number was expected to grow.

“People are worried about what all this means for their families, their jobs, their incomes and their communities,” Cooper said at a news conference. “By blunting the spread of the virus, our actions today aim to lessen the long-term negative effects on our economy as well as our health.”

The governor already declared a state emergency earlier this week, giving him more personnel and fiscal flexibility to attempt to limit the spread of the virus. Cooper previously urged certain at-risk people – adults 65 and over and medically fragile individuals – to avoid large crowds and recommended limited visitation to nursing homes and assisted-living centers.

The statewide limit on assemblies was a recommendation, but Cooper said he had authority to bar such gatherings if warnings weren’t heeded. The governor also urged businesses statewide to use technology so employees can work from home. Similar telecommuting had been encouraged earlier this week for the Triangle area, where a majority of the current positive cases live.

Routine and special public activities in the state already had been getting canceled, postponed or altered this week.

This week’s most prominent event in North Carolina, the Atlantic Coast Conference men’s basketball tournament, was canceled Thursday, the day after the league announced quarterfinal games would be played without fans in attendance at the Greensboro Coliseum. Duke University announced later Thursday it was suspending all athletic competitions by its athletes. The entire ACC soon followed.

“All of our lives will change in some way over the next few weeks and months,” Cooper said at the state’s COVID-19 task force meeting earlier Thursday. “We’re going to have make some tough decisions (and) some of them will be unpopular. But I think it’s critical that we take steps now.”

All 17 University of North Carolina system campuses and many private schools already announced this week they are shifting later this month away from face-to-face instruction and toward alternative methods like online classes. Some universities are extending spring break in part to prepare for the transition away from in-person classes.

Another seven positive cases were announced Thursday. They included the first two cases from the Triad — a Forsyth County couple previously on a cruise ship where others tested positive and the first two from Mecklenburg County. The exposure of a Johnston County person was still being investigated, the Department of Health and Human Services said in a news release.

“There is virus transmitting out there, and as we increase our testing capacity, we expect that those numbers are going to start increasing rapidly,” state epidemiologist Dr. Zack Moore said.

For most people, the new coronavirus causes only mild or moderate symptoms, such as fever and cough. For some, especially older adults and people with existing health problems, it can cause more severe illness, including pneumonia. The vast majority of people recover.