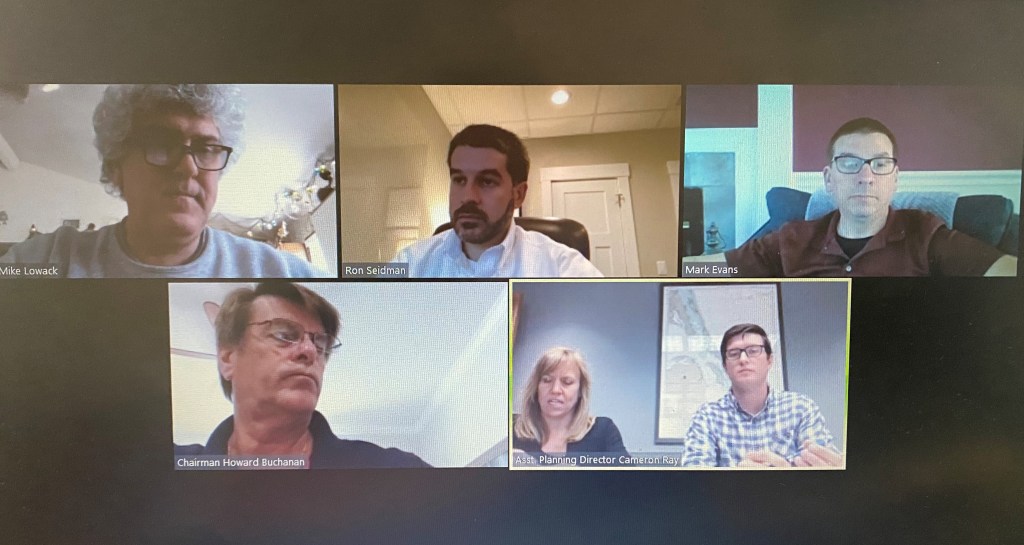 Planning Board members Mike Lowack, Ron Seidman, Mark Evans and Chairman Howard Buchanan were present for the April 16 meeting, along with Meredith Guns and Cameron Ray of the planning staff.

Members of the Kill Devil Hills planning board met via Zoom on April 16 to review a site plan for a new Harris Teeter Fuel Center at 2006 S. Croatan Hwy. in Kill Devil Hills.

In attendance were Chairman Howard Buchanan, Ron Seidman, Mike Lowack and Mark Evans of the Planning Board, along with Meredith Guns and Cameron Ray of the planning staff. Representatives of Harris Teeter Fuel Center Maggie Jones and Garrett Maravetz were present for the virtual meeting as well.

Plans for the proposed fuel center, which will be constructed in a commercial zone, include seven manual fuel pumps, a 540 sq. ft. walk-in kiosk, canopy and nine parking spaces. Ray addressed the fact that the neighboring Harris Teeter grocery store is owned and operated by a separate entity and will not be related to the fuel center.

With some architectural modifications and other minor adjustments to the plan, Ray told the board that the plan is ready for approval. “The applicants have agreed to make the corrections . . . staff recommends that the Planning Board forward this plan to commissioners with a favorable recommendation.”

Lowack and Evans expressed the need to maintain safety while entering and exiting the future structure. Guns explained that the fuel center will have interconnectivity with the Harris Teeter grocery store. When exiting Harris Teeter Fuel Center, customers will be guided back to the grocery store parking lot, over to 8th St. and out to US 158.

After discussion, the general consensus was that the plan seemed sound. Evans made a motion to approve the site plan review, with the corrections from staff, and move it forward to the board of commissioners. All were in favor of the motion.

The only other order of business was approval of a zoning amendment. This amendment would allow permitted uses for multifamily and commercial structures to be approved administratively instead of going through the planning board and board of commissioners.

A “permitted” use means a property owner has the right to use a piece of land as long as the use meets town code. A site plan that meets this code cannot be denied.

In an effort to “streamline” the process of granting permitted uses, Guns felt this amendment would cut the application process and fees by half if not more.

“Currently, [applicants] have to produce 45 sets of site plans to go through the Planning Board and Board of Commissioners,” Guns said. This amendment would require less site plans and decrease the time frame from six weeks to between 10 and 20 days.”

Guns said that “Dare County routinely does this,” as well as the Town of Duck. The board agreed this was a needed amendment and unanimously approved the change.