Gus at home: Happy ending to search for pup who jumped from boat 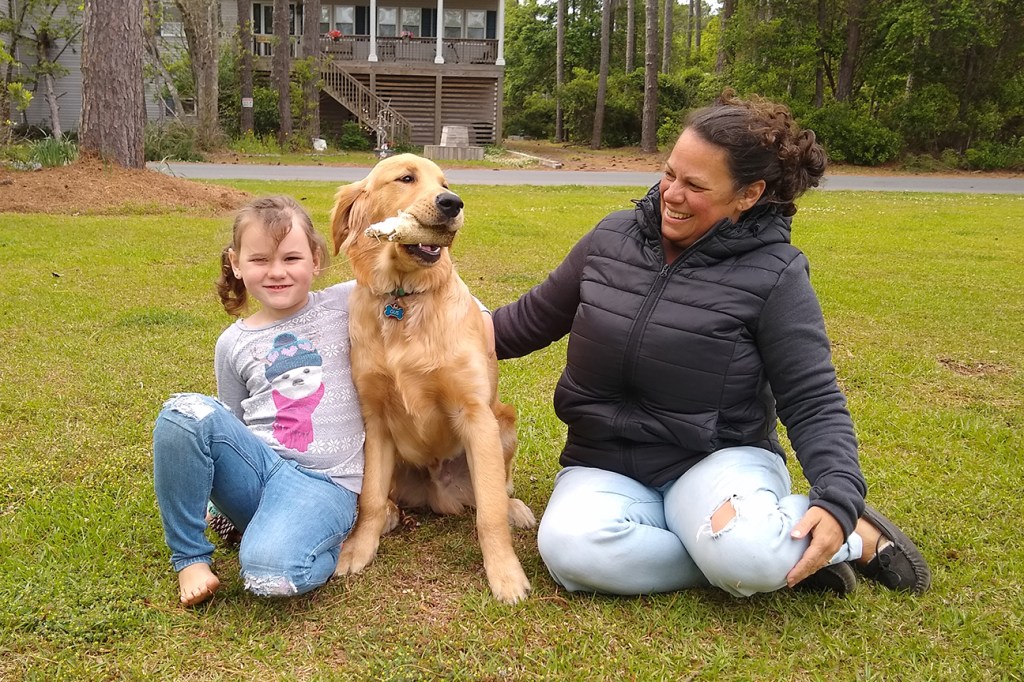 As he romped around the front yard of his Roanoke Island home with a soggy chew toy, Gus – a large six month old golden retriever puppy – showed no ill effects from his recent two-day survival ordeal.

Although golden retrievers are known to be faithful companions who almost always stick by their owner’s side, they are also naturally energetic animals originally bred as sporting dogs to retrieve waterfowl shot during hunting and shooting parties. The “retriever” part of the name is from having a soft mouth that enables them to retrieve game undamaged.

That sporting dog energy – or just being a puppy – might help explain why Gus jumped ship and ended up spending two days in the wilderness.

It was while his owner Davis Pearce was navigating the family’s Hydra-Sports boat in a channel near Duck Island and Oregon Inlet around 5 p.m. the evening of April 28 that Gus decided to jump off the bow of the boat and swim off to a nearby island.

Although it was the second boat trip for Gus, a Christmas present for the Pearce’s six-year-old daughter Macon, it was the first time solo with Davis.

“Gus was out on the boat once before with the whole family,” said Rachel Pearce, Davis’ wife. “I guess we entertained him a little more while on the boat.”

Making his way toward land, Davis walked up and down a nearby island several times but was unable to locate the frisky pup. Determined to make the rescue, Davis searched all night and slept right on the boat.

A search party was organized the next day.

“We were out there all day Wednesday looking for him,” explained Rachel. “We looked on some other nearby islands, but didn’t find him.”

Before heading out to join the Wednesday search, Rachel asked a next door neighbor to make a social media post.

“She has a golden as well and loves mine just as much as hers,” Rachel added.

It became a popular Facebook post and in addition to that post, Davis’ mother Linda Crumpler Pearce also put out a plea for help encouraging everyone to ask their boating and fishing friends to be on the lookout.

“There were lots of people interested in helping,” Rachel continued. “There were a lot of sympathetic well wishes that we find him.”

In spite of the interest and all the extra eyes looking for Gus, Wednesday came and went with no sightings. The lack of success left Macon distraught over her dog being gone, as were a lot of other people.

As Thursday dawned, a friend took Davis and another friend out for another look on the island Davis saw Gus swimming toward. When they searched that island, they found him on a sand spit.

“They found him in good shape,” said Rachel. “Gus went to the vet for a check-up and he was fine. A little dehydrated, but otherwise in good health with no wounds or punctures. He was in better shape than I ever thought he would be in if we got him back.”

Rachel said Gus was also given a steroid shot and some B-12 to help speed his recovery.

According to the ASPCA, based on nationwide research including tens of thousands of lost dogs over the course of multiple years, the odds for finding a missing dog within the first 24 hours are about 93 percent. Those chances drop to about 60 percent after that and given the amount of water and rough terrain on what land is in the sound, it is clear Gus beat all the odds.

No doubt being a larger dog of about 70 pounds – 44 is the average – helped get Gus through his ordeal and back home by Thursday afternoon.

Back at home, Gus received a warm welcome and Macon said she was glad that he was there.

“When he got home we gave him a huge dinner and some cat food,” said Rachel. “That’s his favorite.”

After that, it didn’t take long for life at the Pearce home to return to normal.