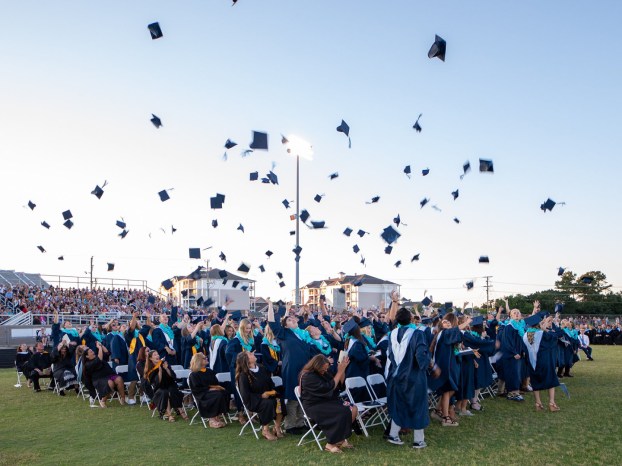 After revealing the framework of graduation plans for Dare County Schools high school seniors on May 11, Superintendent Dr. John Farrelly emailed stakeholders on May 12, informing them that DCS has decided to reevaluate.

“After getting several communications from caring and passionate stakeholders regarding our graduation plan, we have decided to wait and reevaluate our plan until June 1,” he wrote.

Farrelly said this would allow more time to see if mass gathering restrictions are further alleviated in the state of North Carolina.

As of right now, traditional graduation ceremonies are an option for both First Flight and Cape Hatteras high schools, which have both held outdoor ceremonies in past years. However, the governor’s orders still prohibit groups of 10 or more from gathering. This would take “3-4 days at FFHS to get all families scheduled and through our process,” Farrelly noted.

During the Board of Education meeting on May 12, Farrelly spoke on the subject again: “We are trying to problem solve and provide best opportunity we can while still being very constrained.”

Upon releasing the original plans, Farrelly said many parents and students reached out to express their thoughts and concerns. Surveys that were sent out prior to the plans showed a majority of the community in favor of a traditional ceremony. Others were willing to compromise on a drive-thru event or other alternative gathering.

With the idea that North Carolina could shift to Phase 2 of reopening on May 22, stakeholders were wary of the premature decision on graduation. “Well, we have listened again,” Farrelly wrote.

The superintendent said he had spoken with David Hallac of Cape Hatteras National Seashore earlier that day about the possibility of having Manteo High School’s graduation at their usual venue, Waterside Theatre.

Hallac came back with a “yes” from his director in Atlanta, granting access to the currently closed venue if MHS wished to have their ceremony there, while following executive orders and keeping gatherings under 10 individuals.

Farrelly said he was “concerned about rain, but we can’t control the weather.” Weather concerns were what led the decision with the original plan of recognizing students and their families inside an auditorium.

Stakeholders expressed their apprehension in having ceremonies in a contained space as opposed to being outside.

“I have spoken with Dr. Sheila Davies regarding inside versus outside venues,” Farrelly started, “and she did not feel that there was any difference in public health concerns given the level of detail that we were following guidelines.”

With time to spare, Farrelly agreed it was “important for us to let this breathe a little bit.” He emphasized that no matter what, DCS is bound to comply with executive orders, but understood things could very well change in the coming weeks.

Chair of the board Bea Basnight expressed her appreciation in postponing a decision: “It’s a really good plan; I appreciate fact that you showed leadership by listening to all those folks.”

The N.C. Division of Marine Fisheries is seeking input from the public on a draft spending plan for $7.7 million in federal... read more

Many states scrambling to update hurricane plans for virus

Stenhouse heads to Bristol buoyed by good run at Charlotte

Guest Opinion: Farmer aid program will help many, but is designed to help largest farmers most

US closes probes into three senators over their stock trades

Letter to the Editor: Questions about sand replenishment in Dare’s budget