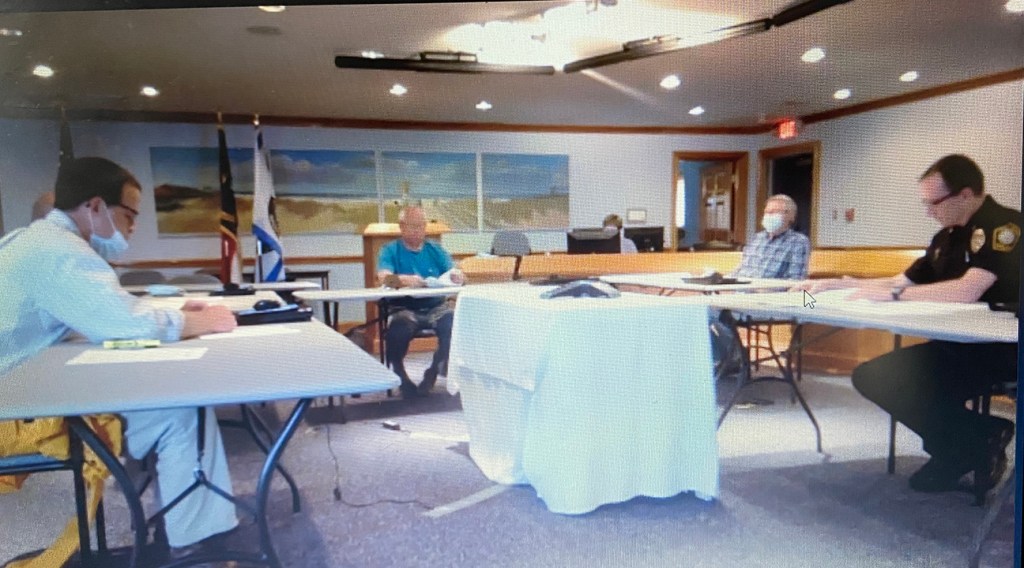 Members of the Dangerous Animal Appeal Board met with police chief Phil Webster on Monday to set a hearing for May 21. Zoom screenshot

The Nags Head Dangerous Animal Appeal Board met on Monday, May 18 to determine a board chairman and to hear a recent appeal for two dogs decided to be “dangerous.” The hearing is set for Thursday, May 21.

The DAAB is normally comprised of five members. Currently, there is one vacancy on the board.

The four members currently serving are Jeff Ackerman, Marvin Demers, Bobby Gentry and town manager Cliff Ogburn. For the upcoming hearing, Ogburn noted that only three members would be able to partake to avoid the risk of running a tie.

“I think the town manager ought to be one of the three,” Demers said. Gentry elected himself to step down for the Thursday hearing. Ackerman was chosen to serve as chairman.

As for appeal, the ordinance states that the police chief has the authority to make a determination on whether an animal is considered “dangerous.”

The two dogs in question are presently being held at the Outer Banks SPCA in Manteo. They are owned by two residents of Nags Head.

The residents filed for appeals within three days of receiving a notice regarding the determination, therefore bringing the case to the DAAB.

Police Chief Phil Webster was present and relayed that materials for the hearing were to be provided by Tuesday afternoon. Materials are set to include a case summary and legal documentation.

Ogburn pointed out that a decision deadline was not set, so the board discussed a reasonable deadline. “I think these determinations are pretty cut and dry . . . they either are or they are not,” Gentry said.

Everyone was in agreement that a decision was to be made Thursday, given the circumstances of having the hearing during an open session via digital communication.

Webster noted that during the hearing, he plans to call upon four witnesses and have photographs and possibly a victim testimony. The appellants are said to gathering materials such as veterinarian reports as well as dog trainer and kennel reports.

After some language modifications suggested by Demers, he made a motion to adopt the rules of procedure for Thursday’s hearing and all were in favor.

To view and listen to the hearing on May 21, Nags Head asks that residents register at the following Zoom link https://nagsheadnc.zoom.us/webinar/register/WN_xkBa5KlYScm-EiJK-HlV5w.