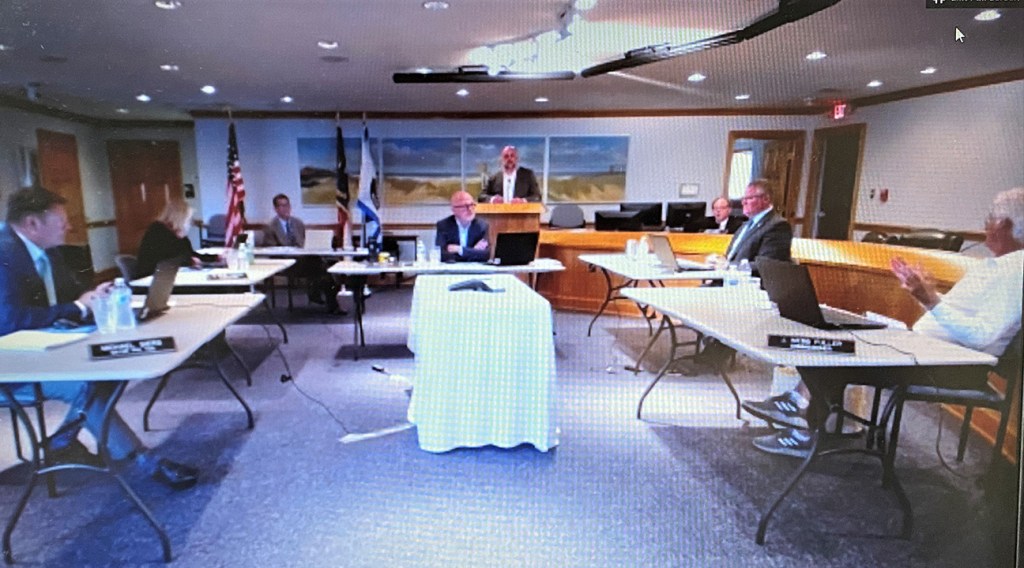 On May 20, Nags Head commissioners explored alleviating restrictions on outdoor dining and food trucks, reviewed their budget for the next fiscal year and revisited the topic of curbside recycling.

Michael Zehner, planning and development director, presented a draft ordinance to the Planning Board on May 19. The ordinance involved permits allowing for reasonable, temporary accommodations in zoning regulations in the event of an emergency. In this case, restaurants would be allowed to reduce their parking by no greater than 20% to accommodate outdoor dining and food trucks.

After receiving unanimous approval from the Planning Board, the agenda item moved to the commissioner’s plates.

Zehner explained that restaurants would be able to apply for such permits if approved by the board, and commissioners elected to waive the $75 site plan review fee for this circumstance.

Zehner said if the governor announces his plans for relaxing restrictions on gatherings, the town already has a mechanism in place to address the needs of restaurants. This mechanism, a crowd gathering permit, would be a very temporary solution to the large problem facing business owners.

However, the plan is for this new permit to be more of a long-term solution. “It would be a more permanent solution for this emergency and future emergencies as well,” Zehner said.

After commissioner Webb Fuller inquired about the 20% parking reduction being inconsistent with other municipalities, the board agreed that a 25% reduction would be more appropriate.

If approved, these permits would expire after 90 days, or upon a timeframe set by the mayor. “We can always renew it,” Fuller said. After consensus from the board, commissioner Renee Cahoon motioned to bring the discussion to their public hearing on June 3. All were in favor.

Prior to discussions regarding restaurant alleviation, the board heard from many Nags Head residents during public comment. Most were upset with the suspension of the town’s curbside recycling program, which stemmed from an imbalanced fiscal budget.

“Please do what you can to restore a recycling program,” one resident asked. Another said they were “willing to pay more to reduce waste.” Some asked for a public hearing to voice their opinions on the matter and most were in favor of compiling other feasible options that did not involve terminating service.

Fuller expressed an interest in exploring a subscription service for curbside recycling, similar to those in the neighboring towns of Kill Devil Hills, Kitty Hawk, Manteo and unincorporated Dare County.

“There are vendors out there that will provide a once a week service for curbside at a cost of $15 to $20 per month,” he offered. With a reminder that the town still offers a central drop off location for recyclables, Fuller said would like to have staff help the town in facilitating a subscription-based service.

“I think everybody in this room is strongly in favor of recycling,” he said, “[but] there seems to be some information that is different than information we have received.”

Mayor Ben Cahoon suggested a three-part plan to staff: (1) staff explores facilitating subscription service similar to that of the towns mentioned previously, (2) that staff develop an information campaign to further describe the decision-making process and what is currently available for recycling and (3) that a program to encourage in reduction, reuse and recycling, along with other environmental approaches, be outlined and brought back to board to, if necessary, support a campaign.

Staff agreed to compile the requested information for review at a future meeting.

As for the budget, town manager Cliff Ogburn summarized the plan for the fiscal year 2020-21 town budget.

“Revenues are slightly above what was forecasting in early April,” he reported. This now allows the town to fund operating expenditures and some capital improvement and maintenance expenses so that Nags Head “doesn’t fall too far behind.”

These budgeted projects still in play include beach access maintenance, road paving for the new multiuse path and continued sand fencing, which will be funded by Dare County. Radios for the police department and ocean rescue as well as fire department testing equipment will also remain in the budget.

On March 27, the commissioners will meet to piece together information for their hearing on June 3, the anticipated date of budget adoption.