An unoccupied Rodanthe beach box lost its battle with south swells around 1:30 a.m. on Friday, May 29.

The oceanfront cottage at 23238 Sea Oats Dr. in north Rodanthe was completely destroyed.

The structure owned by John V. Redden and Wanda S. Redden of Mooresville has been on the endangered list for years, reports Donna Creef, Dare County planner. 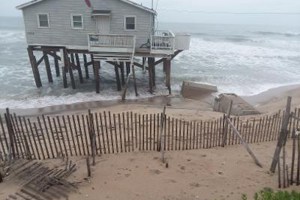 The house was still standing on Thursday, May 28. Photo by next door neighbor Jimmy Hayes.

The homeowners were prepared for eventuality. Early Friday morning, general contractor Philip Edwards was on the scene starting cleanup.

The debris field that Edwards will clean up stretches northward six-tenths of a mile to the northern end of Rodanthe and beyond into Pea Island National Wildlife Refuge.

Vacationers in a different oceanfront house reported debris banging against the pilings. The house was on G.A. Kohler Ct., one street north from Sea Oats. The vacationers escaped from the house and moved in with friends on Sea Oats, reported Water Rescue Capt. Jeremy Carpenter.

A warning was issued via text message at 10:57 a.m. stating “Rodanthe, Waves, Salvo beach goers take notice! Dangerous debris has been reported on beach and in the water. Exercise caution entering the water.”

Dare County’s proposed 2021 budget up for consideration next week