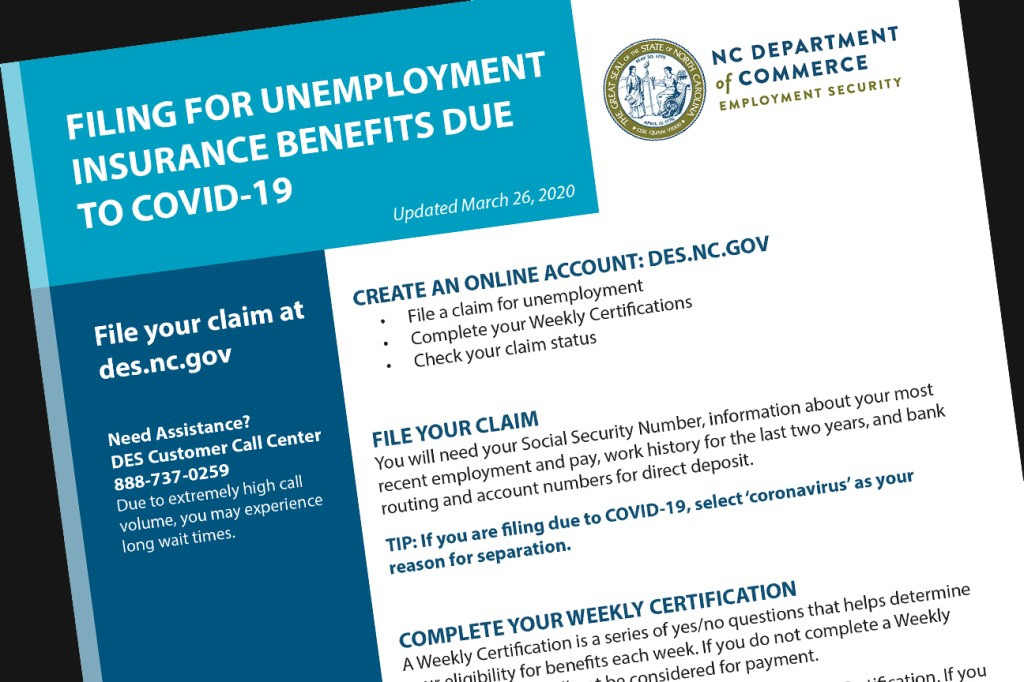 In April 2020, unemployment rates (not seasonally adjusted) increased in all 100 of North Carolina’s counties.

Bertie County had the lowest at 6.4%. All 15 of the state’s metro areas experienced rate increases. Among the metro areas, Durham-Chapel Hill and Greenville each had the lowest rate at 9.5 percent, according to information released June 3 by the North Carolina Department of Commerce.

The April not seasonally adjusted statewide rate was 12.5 percent.

In April, the figures are reversed. No county had a rate below 5%. Counties with rates between 5% and 10% numbered 23. Some 77 counties had unemployment rates above 10%.

According to the North Carolina Department of Commerce, in April the number of workers employed statewide (not seasonally adjusted) decreased by 676,373 to 4,090,238.

The next unemployment update is scheduled for Friday, June 19, 2020, when the state unemployment rate for May 2020 will be released.

The division has been unable to handle the huge influx of claimants. More than 300,000 North Carolinians are waiting for a response from the division.

On May 27, a new Division of Economic Security was appointed. Former member of the General Assembly Pryor Gibson was tapped for the job, which Gov. Roy Cooper said on Thursday, was to “significantly improve customer service.”

Cooper said at a media conference he told the division leaders “to find a way to answer every single call.”

The previously director Lockhart Taylor was reassigned within the Department of Commerce.

Total nonfarm payroll employment rose by 2.5 million nationwide in May and the unemployment rate declined to 13.3 percent, the U.S. Bureau of Labor Statistics reported June 5, 2020.

These improvements in the labor market reflected a limited resumption of economic activity that had been curtailed in March and April due to the coronavirus pandemic and efforts to contain it. In May, employment rose sharply in leisure and hospitality, construction, education and health services and retail trade. By contrast, employment in government continued to decline sharply.

The unemployment rate declined by 1.4 percentage points to 13.3 percent in May, and the number of unemployed persons fell by 2.1 million to 21.0 million.