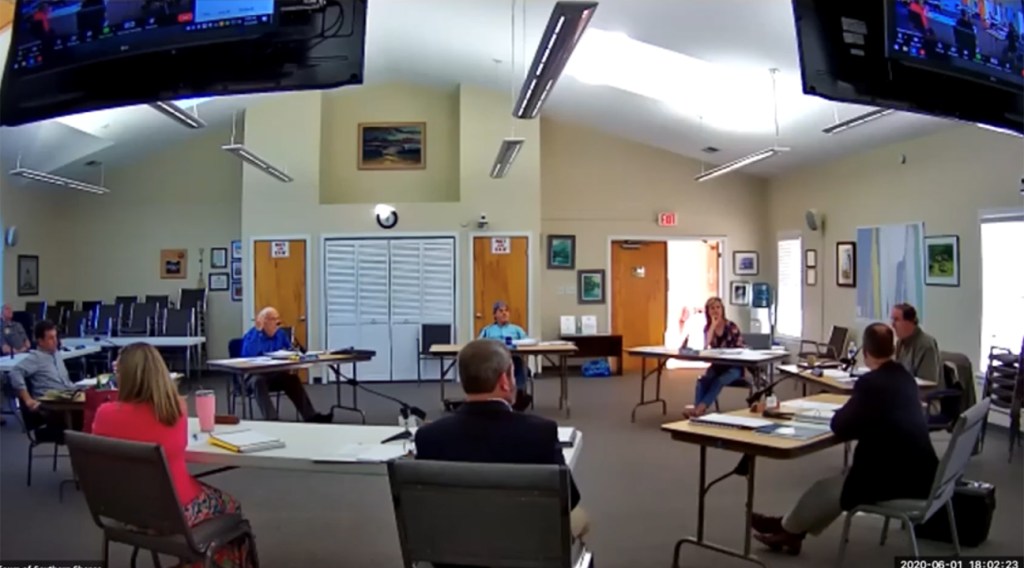 On June 1, the Southern Shores Town Council held two public hearings regarding next fiscal year’s budget and the flood prevention ordinance, both of which have been discussed at several prior meetings the council has held.

After reviewing the budget at their last budget workshop session, the council decided that in order to compensate for the reductions in occupancy, sales and land transfer taxes, $662,340 that would traditionally have funded street projects would be used to offset the loss in revenue.

With everyone on board with the decision, Mayor Tom Bennett made a motion of approval to adopt the FY 20-21 budget for the town. A unanimous vote carried the decision through.

As for the new flood maps and an update to the town’s flood damage prevention ordinance, the public hearing brought only one public commenter, Mike Martin, who serves as a North Carolina representative for the Home Builders Association.

Martin said that the new ordinance language that was discussed previously “fixes a lot of the problems we have had over the years.” He was in favor of having the plans effective as soon as possible.

Councilmen Leo Holland expressed his concerns with homeowners opting out of flood insurance, to which Mayor Pro Tem Elizabeth Morey commented: “People are going to need to be proactive.”

With the council finding consensus once again, Bennett motioned to approve the plans. The proposed revised flood chart would be effective June 1, with the flood maps becoming effective on the 19th. Everyone was in favor of his motion and it passed 5-0.

The council then deliberated having “No Left Turn” weekends in July and August. This would apply to South Dogwood Trail, where a minimum of two police officers would enforce any violations and respond to/investigate any motor vehicle accidents at the intersection during the weekend timeframe.

The total cost for two officers per weekend amounts to $2800. After some discussion, councilman Matt Neal motioned for staff to seek a budget amendment to allow for three “No Left Turn” weekends. He added that the funds should come from the unassigned fund balance rather than a line item.

After involving Police Chief David Cole in the conversation, the council agreed to hold the initiative on the following weekends July 4 and 5, July 25 and 26 and August 1 and 2.

The last major item of business was to consider responses to the RFQ regarding a town engineer for Southern Shores, whose duties would include providing “ongoing general professional engineering, environmental, surveying and related services upon demand and authorization of the town.”

The board was torn; councilman Jim Conners and Holland were ready to make a decision on who they had scored most qualified: Joe Anlauf PLLC and Andy Deel PLLC. Neal and Morey wanted to wait on a decision and seek the advice of their new town manager, Cliff Ogburn.

Anlauf and Deel are the current town engineers, said Haskett, and have served the town since at least 2016. Conners said he felt “a lot of this comes down to fees and history that that team is offering.”

Morey wanted numbers; she wanted to know percentage-wise how much of each project would go to engineering and oversight. After Conners motioned to elect Anlauf and Deel, Bennett asked to amend the motion to postpone action until the June 16 workshop.

Conners reluctantly agreed to defer his motion until their workshop meeting, but no later. The motion will sit as is in front of the board at that time.

Discussion held on placement of county ambulance in Duck