Coast Guard members from Elizabeth City rescued two people and a cat from a sinking houseboat on the Scuppernong River off the Albemarle Sound on Saturday, June 13.

Coast Guard watchstanders at Coast Guard Sector North Carolina received the initial report from the Pasquotank 911 Call Center, stating that two people and their cat were aboard a 50-foot houseboat that was taking on water.

According to the Coast Guard, the two people were hoisted to the helicopter and brought to the Northeastern Regional Airport. The boat crew took the cat aboard and returned it to its owners. No medical concerns were reported.

“We’re fortunate that we train for these types of scenarios all of the time,” said Lt. Karisa Kealy, one of the rescuing pilots from Air Station Elizabeth City. “Even though it may be different when you are responding to an actual emergency, you have a solid foundation from your training to always fall back on. That’s what makes the Coast Guard so good at what we do.”

The rescue was the first operational hoist for Kealy and the first rescue for Petty Officer 2nd Class Martin Andrada, the flight mechanic on the case.

“Working with Petty Officer Andrada was fantastic,” said Kealy. “We were all confident in each other’s abilities and worked through the evolution as a team.”

The boat owner is coordinating a plan with the Coast Guard to salvage the houseboat. 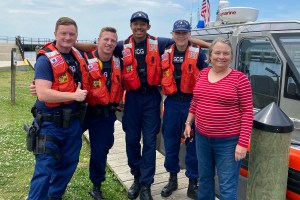