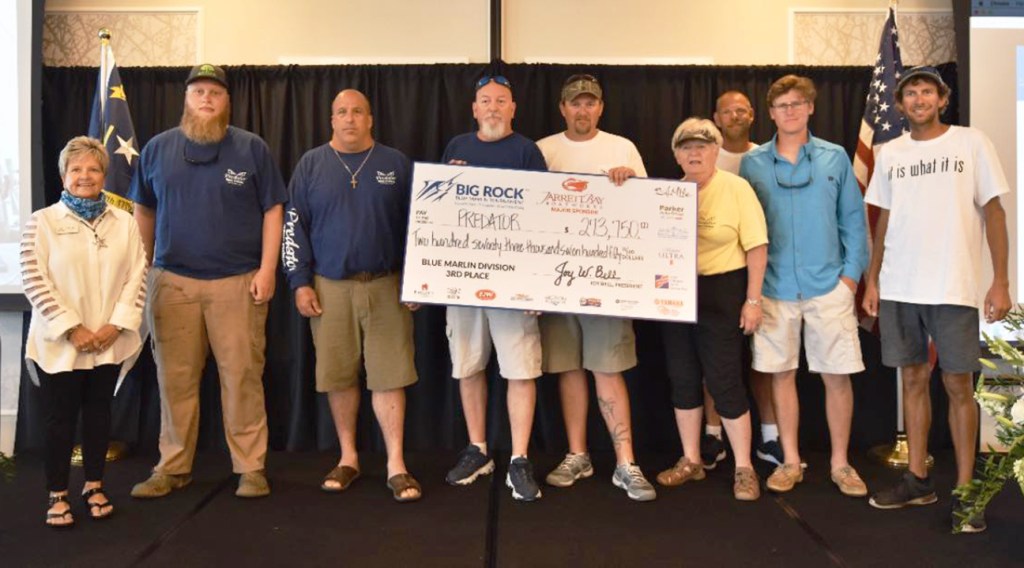 The Big Rock Tournament finished in grand style with first place going to Pelagic Hunter II, a 35-foot Contender with outboards. This is the first time in over 30 years for an outboard to win the tournament.

One pound separated the big fish winner from third place.

Pelagic Hunter II from Sneads Ferry boated a blue marlin weighing 495.2 pounds and earning at total of $223,263. Angler Riley Adkins fought the marlin for five hours on Friday, June 12. The massive blue marlin was weighed in at 7:45 p.m. on Friday.

Hatteras village’s Predator stayed at the top of the leaderboard with a blue marlin weighing 494.2 pounds from 7:45 p.m. June 8 until June 12, when Pelagic Hunter II weighed in. Predator’s angler was Gene Olmo.

Predator was pushed to third when Sea Striker weighed in a 495-pound blue marlin at 2:11 p.m. Saturday, June 13. The angler aboard Sea Striker was Jon Henry.

Sandy Oeullette, from Hatteras, now living in Winston Salem, was “the chair lady” aboard Predator. She turned the fighting chair to keep the line straight. “It’s what I like to do,” she said.

Bill and Theresa Bonner own the Predator, a 57’ Leonard Rigsbee. On the boat for the 2020 Big Rock, in addition to Oeullette, were anglers Bill Bonner, Joe Bonner, Mitch Grooms, Gene Olmo and Shane Whitlow. Mates were Kevin Davies and TJ Berry.

Area boats listed as participants in the 2020 Big Rock Tournament were: