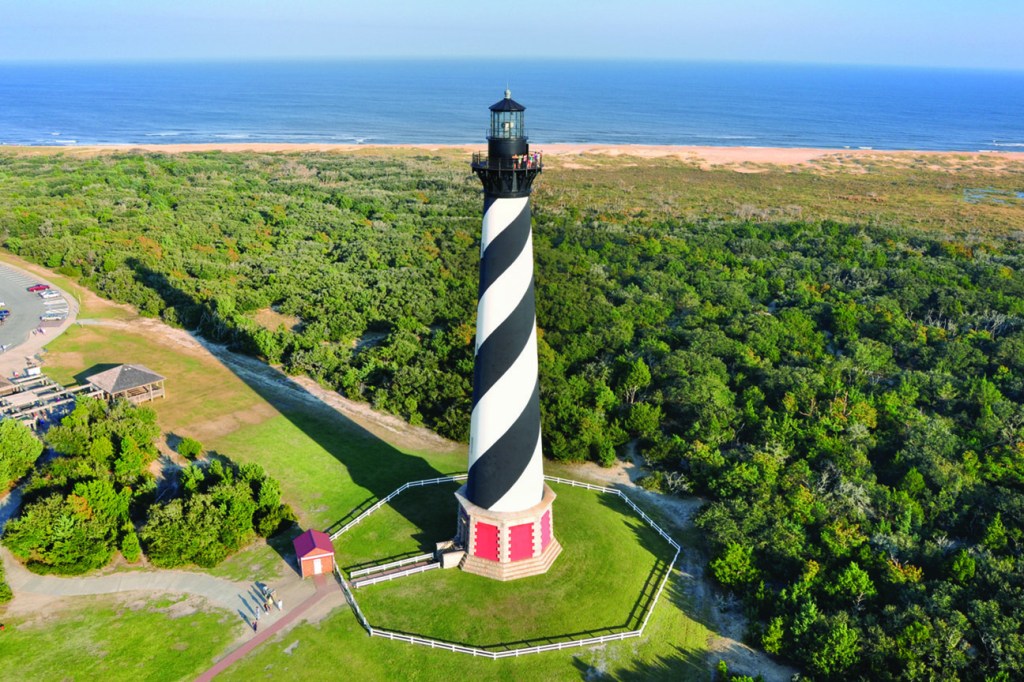 Legislation is moving through the U.S. Congress that will address long-standing maintenance needs of the National Park Service and U.S. Fish and Wildlife Service as well as three other federal land agencies and sets up permanent funding for a conservation fund.

Burr calls the Land and Water Conservation Fund “a commonsense program that not only increases recreational access to public lands in every state, but does so at no cost to taxpayers.”

In 2019, Burr led a successful effort to make the Land and Water Conservation program permanent. The fund had been allowed to expire.

Under the terms of the Great American Outdoors Act, funding is set at $900 million annually. The monies come from royalties earned from offshore oil and gas revenues. Funds allocated to the conservation fund had regularly been diverted. For the last two decades, allocations have ranged from $149 million to $573 million.

The Land and Water Conservation Fund, created in 1965, has two portions, one federal and one state. The federal portion is used to acquire appropriate in-holdings within national parks and other priority projects of federal land agencies. The state portion funds development of outdoor recreation facilities throughout the United States and territories.

The Great American Outdoors Act also creates a five-year fund for addressing the deferred maintenance of the National Park Service, U.S. Fish and Wildlife, the U.S. Forest Service, the Bureau of Land Management, and the Bureau of Indian Education.

The National Park and Public Lands Legacy Fund will receive 50% of all federal revenues from the development of oil, gas, coal, or alternative renewable energy on federal land and waters. Amounts to be deposited must not exceed $1.9 billion for any fiscal year.

The funds must be used for priority deferred maintenance over the next five years. The total to be spent is $9.5 billion. Each fiscal year, the funds will be allocated 70% to the National Park Service, 15% to the Forest Service, 5% each to U.S. Fish and Wildlife Service, Bureau of Land Management and Bureau of Indian Education.

The U.S. Fish and Wildlife Service has nine refuges in the Coastal North Carolina complex. The deferred maintenance needs for the complex total $58,106,629. Alligator River NWR needs $2,276,000 and Mattamuskeet seeks $4,186,126.

In the U.S. Senate, both North Carolina Senators Burr and Thom Tillis are denoted as initial co-sponsors for the legislation.

“It is evident that the infrastructure in our national parks is crumbling right now. Considering the many national parks and forests we enjoy in eastern North Carolina, I fully recognize the massive need for repair and renovation. We simply cannot let them decay from neglect. That said the way the Great American Outdoors Act funds these needs gives me great reason to pause. Given the colossal amount that has been added to our national debt because of the COVID-19 crisis, we must be very deliberate in our spending.

“Rather than determine the amount of necessary and appropriate funding each fiscal year, this bill would make a component of national park funding mandatory just like Social Security and Medicare. If that were the case, Congress would be forced to spend a certain amount each year whether it is truly needed or not. While I recognize the great need for funding in our national parks, I believe funding them entirely through discretionary spending is a more fiscally responsible way to improve and maintain them. Subsequently I have not co-sponsored this bill and will continue to look at options to get our parks back on track as this bill approaches the House floor for a vote.”

Project details for the National Park Service and U.S. Fish and Wildlife Service are provided below: 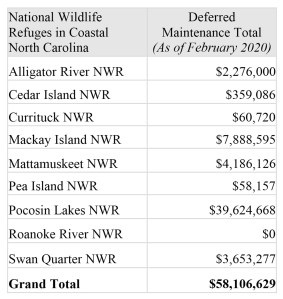 This project will repair the Cape Hatteras Lighthouse, addressing the findings in a Comprehensive Condition Assessment and Historic Structures Report. The project includes masonry repairs, new exterior and interior paint coatings, cleaning and repair of metal stairs, wall panels, and doors, and corrosion-prevention coatings. Windows and vents will be repaired and the project will re-install original exterior pediment window heads currently in storage. Marble floors will be repaired or replaced as feasible. The Watch Room Balcony, Lantern, and Lantern Balcony will be cleaned and repaired, and the decorative fence will be restored.

Description: Replace the park-operated Fort Raleigh and Frisco water systems by connecting them to municipal services. This project will connect all park well water systems and infrastructure to the Dare County Municipal Water System and remove unnecessary facilities from the Outer Banks Group. New water meters and vaults would be installed and a new 8-inch water line extended from the closest Dare County water line location into Fort Raleigh. At the Frisco area, 7,500 feet of new 6-inch water line and its associated appurtenances including new fire hydrants, mainline connections, gate valves, and meter system would be installed. This project would demolish and remove all associated water treatment facilities including numerous water wells associated with the NPS operated Frisco and Fort Raleigh water treatment plants.

Description: The scope of this project will be to rehabilitate and repair the structure as identified by a recent investigation that was conducted by a third party, professional company with expertise in masonry structures. The exterior masonry wall will be repointed to prevent further intrusion of moisture into the envelope of the building with sealant joints being placed over upward-facing surfaces where required. The electrical wiring will be removed from existing conduit, and that conduit will be injected with grout to prevent moisture intrusion. The structure will need to be re-wired in a way that will not create void areas within the structure where water can collect. Areas that are void within the masonry walls that have been identified in the treatment report will be injected to eliminate the collection of water within the walls. A seawater reverse osmosis desalination system will be installed to withdraw sodium chloride from the walls of the interior of the structure.

Refuge staff and volunteers maintain over 350 assets on the two refuges consisting of infrastructure, administrative structures and public use facilities. A few examples include 10 buildings; 3 pole barns; over 150 miles of gravel or dirt roads and levees; 4 pump stations; 160 water control structures and culverts; and over 17 public use facilities such as trails, kiosks, boardwalks, observation towers, and boat launches.

Buffalo City Cabin: The Buffalo City Cabin at Alligator River NWR houses interns, on whom the refuge depends for conducting public outreach programs, assisting with the biological field season, and contributing to maintenance projects. The cabin has deteriorated significantly and needs to be replaced. The replacement project would demolish the existing facility and construct a replacement, bunkhouse style facility to support the refuge intern program. Project cost: about $217,000.

Pole Barn Replacement at East Lake: This deferred maintenance project at Alligator River NWR would replace an aging pole barn at the East Lake Maintenance and Operations Center. The pole shed serves as protection from elements for a variety of heavy equipment used by the fire and maintenance programs. The current 26-year old metal pole shed is highly corroded and deteriorating rapidly. Project cost: about $414,000.

Levee Rehabilitation: The internal levees within the Creef, Laurel Bay, and Twiford management units at Alligator River NWR were built in 1990. Hurricane events in 1999 and 2004 caused the deterioration of the levee system, and the levees today are damaged, eroded, and leaking. Rehabilitating the levees within the three units will allow for optimum water management capability, supporting the cooperative farming program and habitat management in the moist soil units. Project cost: about $172,000.

Rehabilitate North Pond Trail Boardwalk: The North Pond Trail at Pea Island NWR is a popular trail for the nearly 2 million visitors to the refuge each year. The decking on the boardwalk at the entry of the trail is weathered and worn. This project would replace or resurface the boardwalk to ensure that the trail is accessible and safe for visitors. Project cost: about $66,000.

Mackay Island NWR with about 8,651 acres was established to protect and conserve migratory birds, and other wildlife resources through the protection of wetlands.

Oak Point Bulkhead Rehabilitation – Phase 2: This project is phase 2 of a two-phase project to replace approximately 4,500 linear feet of failing bulkhead. The bulkhead protects a high volume public road adjacent to Currituck Sound. The first phase of the project is underway now to evaluate the existing wall and recommend and design a replacement. The replacement can be a similar steel bulkhead, break water or revetment, or a combination of those options. Project cost: about $6,207,000.

Rehab MI-2 Levee: The MI-2 Levee is a critical for managing the habitats within a 400-acre wetland management unit that supports thousands of migratory waterfowl and shorebirds as well as resident wildlife. This deferred maintenance project would rehabilitate the eroded levee by reestablishing appropriate slopes and rebuilding portions of the levee that are low and susceptible to damage by flooding events. Project cost: an estimated $806,099.

Pocosin Lakes NWR encompasses 110,106 acres in Tyrrell, Washington, and Hyde counties. The 12,350-acre Pungo NWR was established in 1963 by the authorities of the Migratory Bird Conservation Act of 1929 and the Fish and Wildlife Act of 1956. The service established Pocosin Lakes NWR in 1990 and designated Pungo NWR as a unit of Pocosin Lakes. The purposes of Pocosin Lakes NWR, including the Pungo Unit, as reflected in the legislation under which Congress authorized the refuge and the refuge has acquired land, is to protect and conserve migratory birds and other wildlife resources through the protection of wetlands.

Rehabilitate Evans Levee: Evans Levee and canal is part of a system of ditches that was installed to drain the land and is a critical asset to the resource management activities of the refuge. The Refuge has been restoring more natural hydrologic conditions in areas that were heavily ditched and drained by installing and maintaining water control structures at strategic locations to minimize the artificial drainage of rainwater from the soil. Over time, canals become heavily silted with excessive debris and overgrown vegetation. This project will return the canal to normal functionality by removing encroaching vegetation and dredging the canal. Estimated project cost: $820,000.

Rehabilitate the Red Wolf Center: The Red Wolf Education and Health Care Facility offers a small reception area for the public, an established viewing area for a pair of captive red wolves, and space to conduct regular health checks on the wolves. The facility is in need of repairs including sealing around doors and window openings, installing French drains, and replacing windows. Completion of this project will ensure the Service retains the ability to provide public education opportunities about red wolves. Project cost: about $14,000.

Replace Residences on Shore Drive with Bunkhouse: Three 1970s-constructed residences (brick houses) along Shore Drive were donated with the land when Pocosin Lake NWR was established in the early 1990s. The largest residence, which served as the station’s headquarters until 2001, became so dilapidated that it was demolished. One of the remaining houses is used to house summer interns, other volunteers, employees detailed to the station, etc. The house is aging, expensive to heat and cool, and in need of many repairs.  The second house is unusable at this point and deteriorating rapidly. This project will replace both remaining houses with a modern, energy efficient bunkhouse. Phase 1 of the project includes planning and design at an estimated cost of $125,000. Phase 2 of the project includes demolition of both houses and construction of a bunkhouse at an estimated cost of $1,630,000. The square footage of the bunkhouse would be less than the two houses.