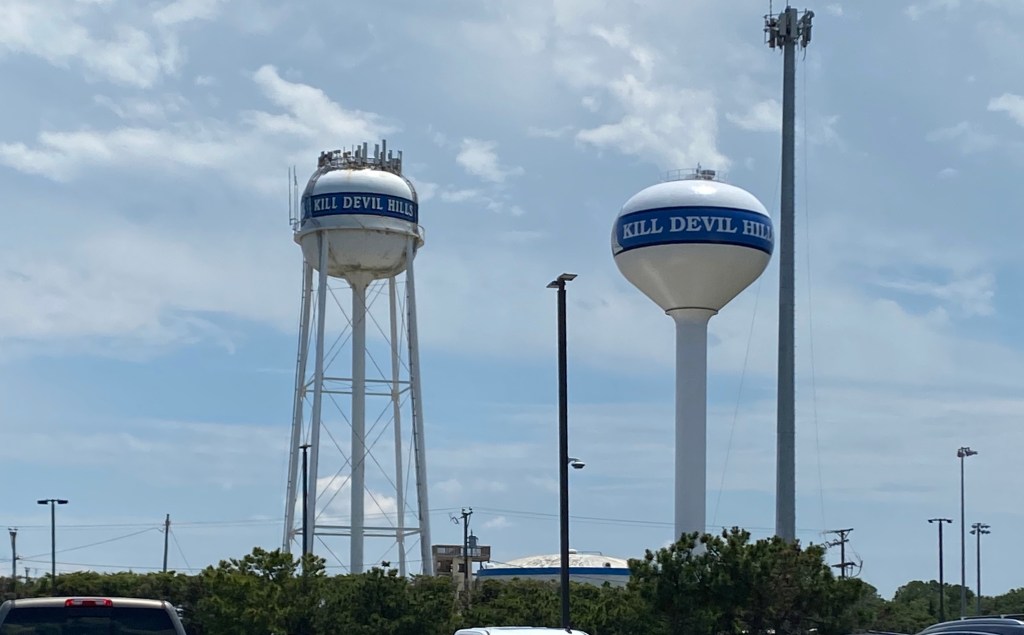 The old Kill Devil Hills water tower, left, next to the new one. Danielle Puleo photo

The Town of Kill Devil Hills announced on Monday, June 29 that water is now flowing from the newly installed water tower.

The KDH Public Services staff along with crews from Landmark Structures and Hatchell Concrete have spent months working on the new water tower to get it ready for operation.

Originally set to be completed by March of 2020, the tower took longer than expected to reach an operational state. Due to the project finishing up three months later than anticipated, there was a cost savings to rate payers in the amount of $35,000.

Steve Alright, Public Services director for KDH, said the magnitude of the project mixed with COVID-19 led to the late finish date, but he is “glad it’s done and in operation.”

Prior to filling to 400,000-gallon bowl, the tower was disinfected to ensure water safety and cleanliness. The new tank was then connected to the pump station and water was sent up the 160-ft. tall tower, which took less than a day to fill.

Water samples were then collected and tested for quality assurance, approved by the North Carolina Department of Environment and Natural Resources.

There is still work to be done on the pump station, according to Albright, but crews will wait until the shoulder season when usage rates drop and less stress is put on the operators.

In terms of next steps, Albright said the public can expect to see Verizon come in to add an antenna to the monopole. Equipment on the existing tank will be harvested and placed on top of the 108-ft. monopole cell tower.

As for the demolition of the 56-year-old water tower, Albright said a specialized contractor from the Midwest will come out to take care of the deconstruction. “He does it nationwide,” Alright said, “we just got to get into his schedule.”

As of right now, the old water tower is set to come down in the fall. Albright guesstimated October for demolition, but a release will be sent out by town staff once a date is set.

“It’s a once in a lifetime thing to see tow towers side by side,” Albright noted. He suggested residents and visitors alike come out to get photos while they can.

Alright said that the original graphic for the tower was turned over to the engineer and copied, but it “didn’t look right.” After discussion, the town decided to go with a local design created by Dave Rollins with Access Design.

“I think the finished product is tasteful and aesthetically it makes a punch,” Alright said. He felt the water tower elements incorporate the history and integrity of the town, which was important in the design and construction process.

For questions regarding the town’s water towers, call the Public Services Department at 252-480-4080.