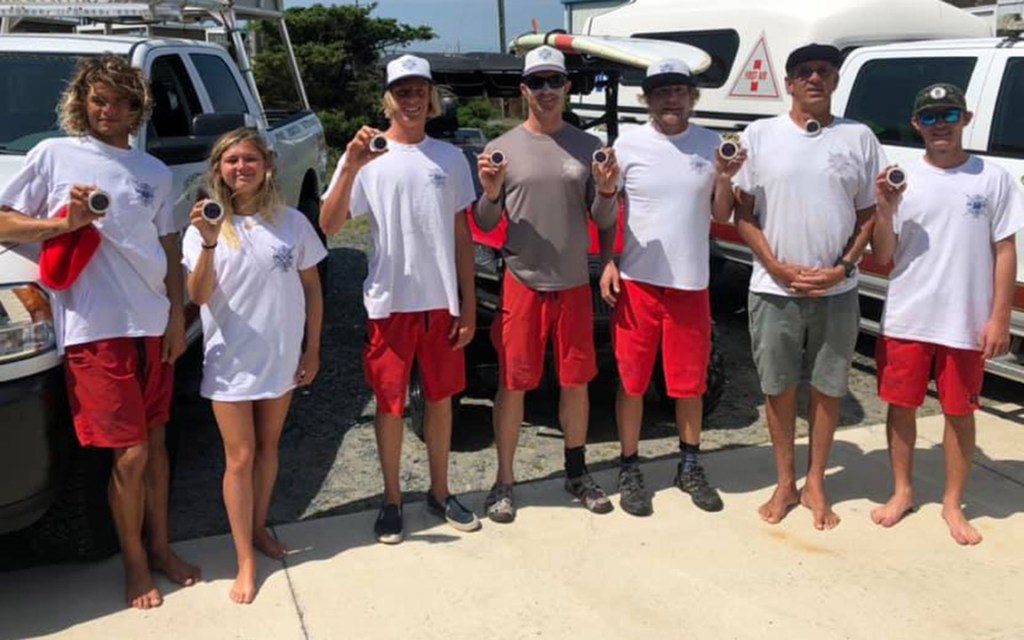 The Outer Banks has hit its peak season. With the influx of tourists mixed with sunnier days and warmer weather, water rescue operations can be found up and down the coast looking out for beachgoers.

Water rescue squads serve as advisers to beachgoers. “We are on patrol and advise people of the risk in their area,” said Captain Jeremy Carpenter of Chicamacomico Banks Water Rescue.

Carpenter shared that his crew is in charge of assessing the water risks and threat levels each day and relaying that information to the general public. The water rescue crew then patrols their respective span of coastline via truck and/or personal watercraft.

As for this season, Carpenter said the call volume is on par with being equal to or above their 2019 numbers. As of mid-July, the Chicamacomico division has had 128 incidents with 37 people assisted out of the water their 4.5 mile stretch of beach.

“Our crew has been very vigilant,” reported Carpenter, who has 14 staff members currently.

Captain Chad Motz with Nags Head Ocean Rescue said their call volume so far this year is below average. This season has brought 66 total calls in to his ocean rescue, 39 of which were water rescue calls as of the end of June.

“On average, we have about 300 calls a season,” Motz said. He felt that the lower call volume to start off the summer has been due to weather conditions. In terms of staff, he has 37 crew members right now, which he reported is lower than usual.

Water rescue calls come in when someone who has entered the water experiences difficulty getting back to shore. Director Cole Yeatts with Kitty Hawk Ocean Rescue explained that the more educated beachgoers are about the harsh ocean conditions, the less likely an incident is to occur.

“Most people don’t understand the wind,” Yeatts offered. He went on to explain that paddleboarders, in particular, don’t realize that while the wind helps to carry a person 100 yards offshore, it acts against the body while coming back in.

“The body acts as a sail . . . if you keep a lower profile, sit on the board or use it like a surfboard, it’s a lot easier to paddle your way back in,” Yeatts said.

Yeatts has seen 38 actual incidents this season so far as of July 13, mainly due to harsh rip currents. He said on average, their call volume is around 120 per season, which makes them on par this year with previous summers in terms of reports.

However, Yeatts said every year is different; reports are dependent on weather conditions. He advised those headed to the beach to make sure they check the weather report for that day and act accordingly.

“The safest place to stand or swim is in front of a lifeguard stand,” he shared. This year, Yeatts has 13 staff members patrolling the Kitty Hawk beach.

Mirek Dabrowski, who oversees the ocean rescue operations of both Southern Shores and Duck, said he has had 61 calls come in this season as of mid-July.

Dabrowski has a fully staffed operation, with 55 lifeguards. “I hired more than I thought I needed this summer because of what could happen,” he said, “and I just had the space and room to put them.”

The coverage areas for the combined town’s beaches is about 10 continuous miles. Dabrowski said his operation flows smoother when there are a lot of hands on deck to respond when needed and be there to help advise everyone on the beach.

Dabrowski also contracts out a lifeguard to man a stand at the soundside beach access near the Dare County Regional Airport.

That particular lifeguard stand is manned seven days a week, from Memorial Day through Labor Day from 11 a.m. to 6 p.m.

Dabrowski recently enlisted the help of Phill Lloyd, a resident of Nags Head, to train lifeguards in using a new technology meant to reduce the time it takes to find a missing swimmer. Lloyd is a national training manager for this new technology, known as AquaEye.

AquaEye is a handheld scanner that uses ultrasound and artificial intelligence to identify victims underwater. It was first used locally on July 3 when a call came in for a missing swimmer near Kitty Hawk Pier.

After deploying the new technology on July 3, the search took about an hour. In some cases, search and rescues can take days.

Chief Jack Scarborough with Hatteras Island Rescue relayed that there have been 56 dispatched calls since the first of the year to July 2, with 26 calls coming through in the months of June and 39 rescues.

“We have thirty volunteer members,” said Scarborough, who heads his volunteer crew. Six of his staff members working per day Monday through Friday from 9 a.m. to 5 p.m., and volunteers answer calls on weekends and also supplement the part-time paid staff during the week.

In Corolla, the response area spans approximately 23 miles of beach, from the Currituck/Dare county line to the Virginia state line. Matt Hewes with Corolla Beach Rescue said his coverage area also encompasses about 100 square miles of the Currituck Sound.

“Our mission is to ensure the safety of approximately one million beach goers each season through close public observation, education and interaction,” said Hewes.

As for the numbers, June saw 98 rescues in Corolla, compared to the 87 that occurred last summer. The beach rescue is on par with 2019 in that sense, experiencing a similar call volume and rescue rate.

“Weather conditions such as wind speed and direction, swell height and direction, offshore storms in the Atlantic, to name a few are the main factors that contribute to the rescue count,” Hewes said.

The following list displays where lifeguard stands are located in each respective town. It is suggested that those taking to the beach stay close by to a lifeguard stand, especially in the event of an emergency.