Christopher Layton, Duck’s town manager, was arrested on July 15 for two misdemeanor counts of assault on a female. The person listed as the victim is a Town of Duck employee.

According to the arrest report from the Town of Duck Police Department, arresting Officer Justin Naquin was advised by Chief of Police Jeff Ackerman that Master Police Officer Tammy Bybee “was providing probable cause to the Dare County Magistrate, at the jail, concerning an assault on a female charge” against Layton. This was at 4:40 p.m. on the day of the arrest.

The arrest report states that Naquin was advised that a physical arrest was approved by the magistrate, at which time Naquin and Sergeant Melissa Clark arrived at the Town of Duck administration offices and took Layton “into custody without incident” in Layton’s office.

After arriving at the Dare County Detention Center, Layton appeared before Magistrate M. P. Duprey on two misdemeanor counts of assault on a female and was released on a $5,000 unsecured bond, according to the arrest report.

Layton has a court date set for August 21. 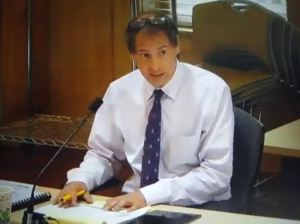 Christian Legner, Duck’s director of public information, said when reached Wednesday, July 22 that under personnel and state law, the town cannot comment at this time, however she did confirm that Layton is currently on paid administrative leave. Legner is unaware of lawyer involvement at this point.

Legner shared that in Layton’s absence, Joe Heard, director of community development, has stepped in to act as temporary town manager.