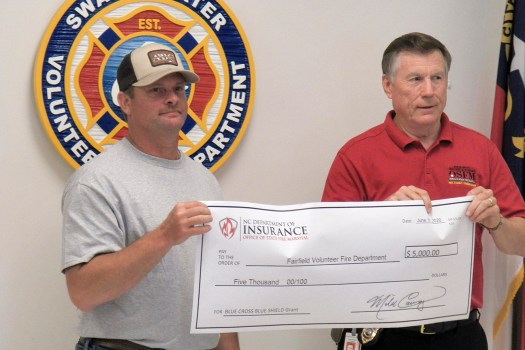 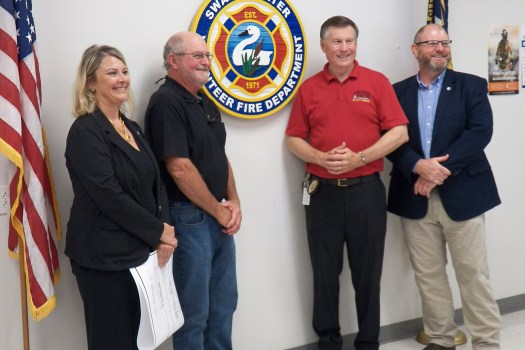 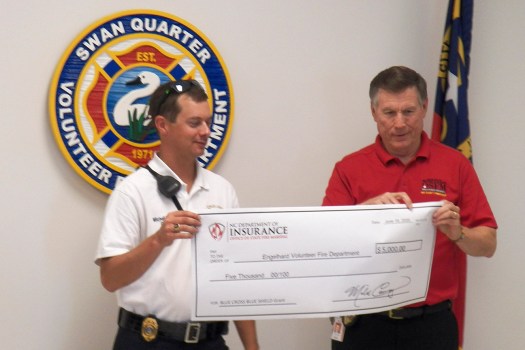 Causey, who also serves as the state fire marshal, encouraged the creation of the grant as a way to support rural departments who receive less than $50,000 in funding from municipal and county governments.

Ninety-four of the state’s lowest funded fire departments were awarded monies to purchase needed equipment to help perform their work more safely and/or to use the funds to pay expenses to operate effectively during the COVID-19 pandemic. Most of the state’s rural volunteer fire departments heavily depend on contributions and fundraising events to help pay their daily operating expenses, events which were not possible during the state’s “Stay at Home” phase of the pandemic.

In his welcoming remarks, SQVFD Fire Chief Jeffrey Stotesberry expressed appreciation for the support that the North Carolina Department of Insurance has provided over the years to help the volunteer fire departments of Hyde County.

Stotesberry pointed out that the one thing that quickly became obvious to him during the visit was how Causey took the time to speak individually to those present from each department. He went on to say that: “The commissioner not only spoke to everyone but he actually took the time to listen – at length – to their concerns. He showed a definite interest in learning about the challenges we face, how we’ve overcome them and what support we might still need to be successful.”

During Causey’s comments regarding his office’s involvement in procuring funding for the state’s lowest-funded fire departments, he mentioned that he and others from his office would be personally delivering the actual checks to each organization across the state.