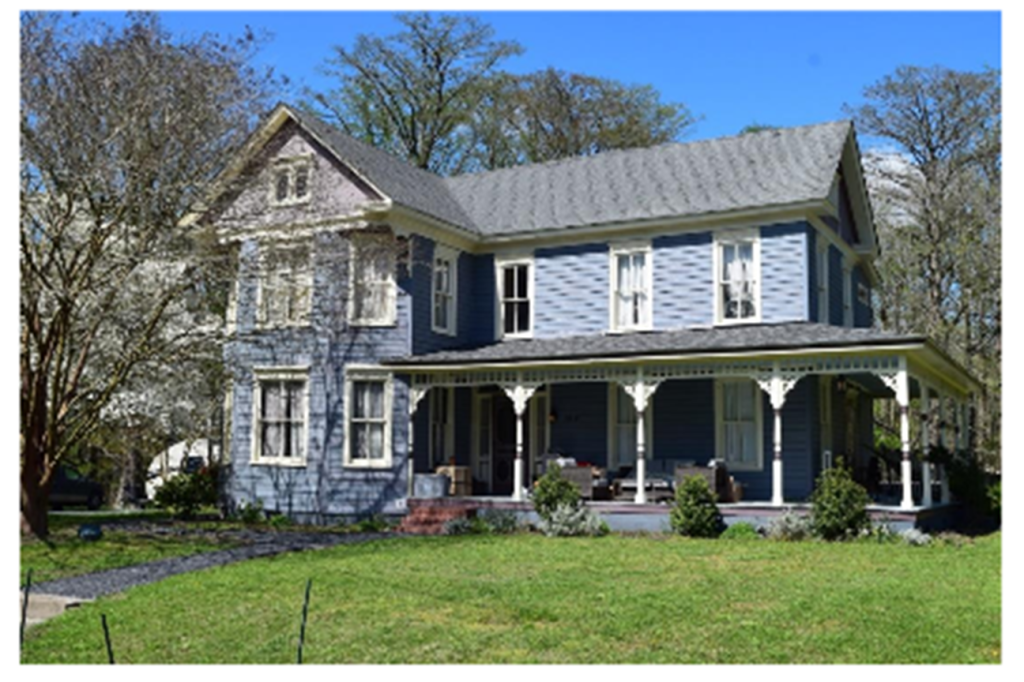 The Martin C. Poyner house built in 1899 on Shingle Landing Road in Moyock was designated as local historic landmark by the Currituck County Board of Commissioners at their July 20 meeting. Courtesy photo

With Chairman Bob While absent, Vice Chair Mike Payment called the July 20 Currituck County Board of Commissioners meeting to order.

During that meeting, commissioners designated one property as a local landmark, approved a preliminary plat for one residential subdivision and scheduled a vote on a second subdivision for the August meeting.

Acting on an early agenda item, an application requesting local landmark designation for the Poyner house in Moyock Village was given unanimous approval, making it the first local historic landmark property in the county.

According to current property owners Anthony and Virginia Agreste, the two-story, 2,059 square foot Victorian-style home at 219 Shingle Landing Road home was built in 1899 by Martin C. Poyner, a prominent store owner, farmer and landowner in Moyock who also served as postmaster for a time. One of his general stores facing Caratoke Highway still stands today.

The house and a tin-roofed barn built about the same time period still maintain the majority of their historical integrity.

Properties designated as a local landmark must meet secretary of interior design guidelines and deserve recognition and protection due to, among other things, its history, design, architecture, setting or workmanship.

Participation in the local landmark designation program is voluntary. Once designated, the owners qualify for a 50 percent tax deferral while the property is in the program.

Also given a green light was a request to amend plans for a 100 acre, 31 lot traditional subdivision development at 1216 Caratoke Highway.

The project was originally approved by commissioners in August 2019. The current request included removing a Caratoke Highway access with access through the Fost Development to the north, a change that alleviates a technical review committee safety concern regarding a new and potentially non-signaled railroad crossing to Caratoke Highway.

Questions about potential flooding and other stormwater management issues may have helped bring a split vote for New Bridge Creek Estates plans.

Proposed as a conservation subdivision with 37 lots, each 40,000 sq. ft. along with the redevelopment of an existing subdivision located about 0.2 miles north of the intersection of Beechwood Shores Road and Catatoke Highway in Moyock. The property contains some wetlands and a creek between Beechwood Shores and this development.

Although commissioners Kevin McCord and Owen Etheridge had both been on the property but voiced no concerns on excessive water Paul M. Beaumont said he has drainage concerns since the topography drops at the back of the property and has more moisture.

Applicant Jerry Old said there were wet areas but did not know of any flooding problems there and Michael W. Strader Jr., director of engineering at Quible and Associates, assured the board that there was no drainage impact on surrounding properties and a map in the application packet shows drainage patterns for the area.

During public comments, nearby residents advised that the area is a swamp and digging two stormwater holding ponds there is not wise.

After a lengthy discussion, a motion to approve saw Payment, McCord and Owen Etheridge in favor and Beaumont, Mary Etheridge and Selina S. Jarvis opposed.

The board then agreed to delay any further action until the August 3 meeting when Bob White would be available to cast a vote.

Pence to visit Raleigh in push for schools to reopen