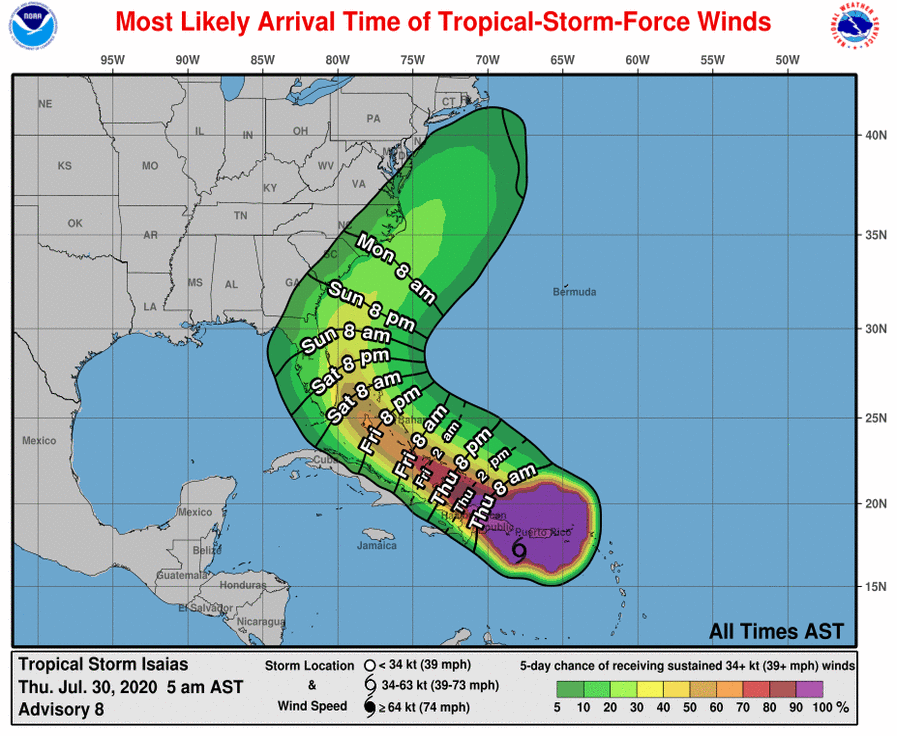 The NWS National Hurricane Center is calling for tropical storm conditions to continue across portions of the Leeward Islands, the U.S. and British Virgin Islands and Puerto Rico overnight. Conditions are forecast to reach portions of the Dominican Republic and Haiti within the warning area by this morning and the southeastern Bahamas and Turks and Caicos this afternoon. Tropical storm conditions are expected in the Central Bahamas beginning Friday morning, July 31 and are possible in the northwestern Bahamas beginning late Friday. 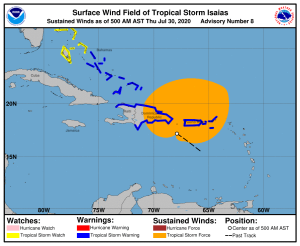 Interests in Cuba and the Florida peninsula should monitor the progress of this system, according to NWS.

At 5 a.m. AST, the center of Tropical Storm Isaias was located over the Caribbean Sea about 100 miles (225 km) west-southwest of Ponce, Puerto Rico and about 160 miles (255 km) southeast of Santo Domingo, Dominican Republic. The system is moving toward the northwest near 21 mph (33 km/h), and a west-northwestward to northwestward motion with some decrease in forward speed is expected over the next couple of days. On the forecast track, the center of Isaias will move over Hispaniola late today and near the Southeastern Bahamas by early Friday.

Maximum sustained winds are near 60 mph (95 km/h) with higher gusts. Tropical-storm-force winds extend outward up to 415 miles (665 km) from the center. A Weatherflow station in Yabucoa Tanque de Agua reported sustained winds of 52 mph (83 km/h) with a gust to 59 mph (94 km/h). Little change in strength is anticipated until landfall in Dominican Republic later today, with re-strengthening forecast on Friday and Saturday.