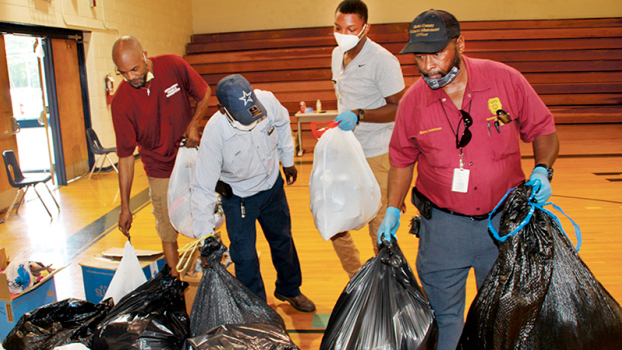 The steady buzz of chainsaws could be heard up and down Woodard Road near Windsor Thursday morning, two days removed from the impact of Hurricane Isasis, which included a deadly EF-3 tornado.

Crews from power companies stopped traffic as electrical lines were being hoisted on top of new poles. Meanwhile, family members busied themselves gathering storm debris and hauling it to the roadside for pick-up.

It appears that life is attempting a renewal in Bertie County in the wake of yet another disaster. These are tough, weather-worn people, bouncing back from Mother Nature’s latest punch, which in the past has delivered deadly tornadoes in 1984 and 2011 as well as devastating floods from hurricanes Floyd (1999) and Matthew (2016) that caused millions of dollars in damage.

Up the road at the county’s Early College High School, a handful of county employees were assigned to receive what later turned out to be “mountains” of garbage bags stuffed full of clothing. Other items such as toiletries, cleaning supplies, diapers and over-the-counter medication – even a guitar and a widescreen TV – were among the donations dropped off by local and regional residents.

Those items will be given to the Bertie residents who lost everything but the clothes on their backs when the strong twister, packing winds of 145 mph, tore through the Cedar Landing community shortly after 1 a.m. on Tuesday.

“We were busy right off the bat when we opened at 10 [a.m.],” said Barry Anderson, Bertie’s nuisance abatement/litter control officer who was among the county workers stationed at the school gym on Thursday morning. “We’re seeing mostly local folks [making donations] but we had a few folks come down from Virginia who dropped off items.” 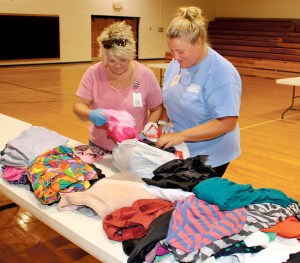 While he and other male workers stacked the bags inside the gym, Bertie DSS employees Angie Cobb and Casey Johnson tackled the task of sorting the clothing according to gender and size.

“This is an overwhelming outpouring of love directed to our county,” said Ron Wesson, chairman of the Bertie Board of Commissioners. “This is a lot more than we expected, and there’s even more on the way. I was told there are a dozen tractor-trailer loads of disaster relief items coming to our county from all across the United States. God bless those who are thinking of us at this time.”

The donation center at the Early College High School (819 Governors Road, Windsor) will remain open weekdays from 10 a.m. until 3 p.m. until further notice.

“While we greatly appreciate all the items of clothing, toiletries and cleaning supplies, what we really need right now are monetary donations,” stressed Wesson. “We have not been declared a federal disaster area from this hurricane, and do not know if that declaration will be made. Even if that does come, it takes a while for that federal funding to trickle down to the local level. Case in point is we’re still waiting on some of the federal funds promised to us from [Hurricane] Matthew which was back in 2016.”

Wesson said the county would need to immediately expend some of its reserve funds, which will hopefully be recouped down the road if and when a natural disaster declaration is made.

“Even as we speak today (Thursday), we’re negotiating a contract with a company that will come in and remove all the storm debris that is piling up along our roadways,” Wesson noted. “Then we have to spend money to feed and provide temporary housing to those who have lost their homes or whose homes are undergoing major repairs. We need funds for that.”

Wesson said the Morning Road Tornado Relief Fund has been established by Bertie County Local Government. There are several different ways to donate:

At the Self-Help Credit Union, located at 302 West Granville Street in Windsor;

Making an electronic donation through PayPal at paypal.me/BertieStrong. A link to that account is also available on the Bertie County Local Government website; or

Writing a personal check made out to the Morning Road Tornado Relief Fund and mailing it to PO Box 530, Windsor, NC 27983.

Meanwhile, several disaster relief organizations are currently working in Bertie County and in need of volunteers. Those groups include:

“We are very appreciative of any type of help. Please keep Bertie County in your prayers as we once again do everything in our power to bounce back from another natural disaster. We’re going to need all hands on deck to recover this time based on the widespread damage we suffered,” Wesson said.

Cedar Landing Baptist Church will also be the starting point for storm victims to be transported, round-trip, by school bus to the Storm Relief Donation Center at the Early College High School gym.

This article originally appeared in the Roanoke-Chowan News-Herald.