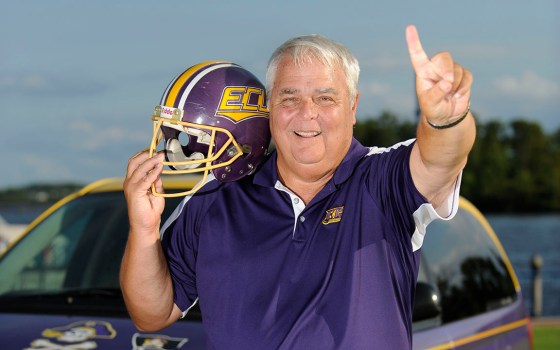 With an easy smile and a kindhearted manner, Washington Mayor Mac Hodges will be remembered as a good friend, a passionate Pirates fan and a dedicated civil servant, who gave his all for the city he loved. Pictured, Hodges posed for the cover of Washington the Magazine in a 2013 photoshoot at Festival Park. 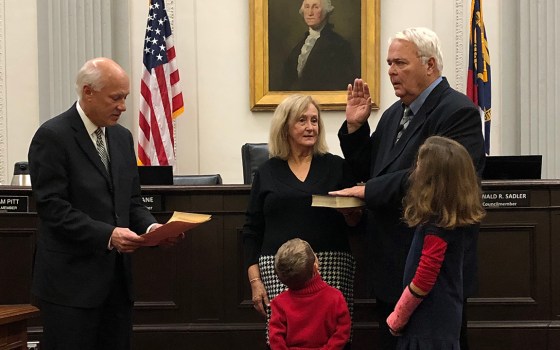 Washington Mayor Mac Hodges is sworn in to office for his fourth term as mayor in December 2019. Hodges was first elected mayor in 2013. 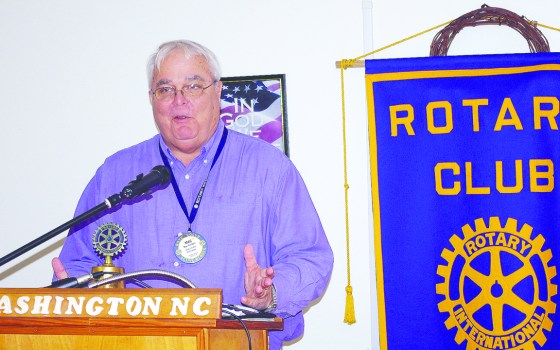 Mac Hodges speaks at a meeting of the Washington (noon) Rotary Club in 2014, just months after being elected mayor for the first time. At the time, he spoke of a renewed Festival Park in Washington, a new lighthouse dockmasters station and "People's Pier" on the waterfront, a renewed Turnage Theatre and hopes for an improved downtown economy. Six years later, those visions have become reality.

Hodges, 69, learned that he had tested positive for the virus July 16, at which time he reported intermittent, mild symptoms. He was hospitalized the following week, then placed on a ventilator July 29. His death Wednesday followed a community prayer service held at Washington’s Festival Park on August 9, during which hundreds of participants prayed for him and others suffering from COVID-19 in the community. He was the seventh person in Beaufort County to die of complications from the virus.

“Our family has been completely overwhelmed by the outpouring of prayers and support during this journey,” his daughter, Beth Hodges Fickling, wrote on social media Wednesday evening. “Mac Hodges’ earthly journey ended this afternoon. Words cannot express how much he meant to us. He lived the best kind of life, one filled with a family that adored him and so many friends near and far. He loved Washington, the Pirates and the beach. Wherever he went, people who met him smiled and loved him. This was true in the hospital as well. He quickly became a favorite up there.”

With his passing, those who knew Hodges best will remember him as a good friend, a loyal ECU Pirate and a dedicated public servant who loved his city and wanted to see it thrive.

One of the mayor’s oldest friends, Tom Payne grew up alongside Hodges, attending the same church together as children. Throughout the years, the two remained steadfast friends, and Payne says he will remember Hodges for his friendly, approachable demeanor and his commitment to service through organizations such as the Jaycees and Rotary.

“Mac was one of the kindest people I ever met,” Payne said. “I was president of the Jaycees one year, and he was president the next. We’ve been buddies a long time. I always thoroughly enjoyed being around him. We sat together at Rotary, and he was just a good friend. I could get riled up on something, and he would be just as calm as could be. He felt very strongly about giving to the community. He was very community spirited.”

Whatever issue one might have, Payne said Hodges would always go out of his way to get it resolved, or at least look into it. In his efforts to grow and improve the city, Payne says the mayor was a visionary and a strong supporter of each and every business in town.

“He was a full-time mayor, and then some,” Payne said.

Another close friend and fellow Rotarian, Washington Daily News publisher emeritus Brownie Futrell, was a constant companion to Hodges at East Carolina University sporting events. Be it football, basketball or baseball, the two were there to cheer on their Pirates.

“He loved East Carolina athletics,” Futrell said. “He and I tailgated together for both baseball and football, and we sat beside each other with our East Carolina season basketball tickets, so we were together for three sports. He loved the athletics, but he also loved the social aspect of being a part of a family tailgating.”

During those tailgating events, Futrell said Hodges was often more concerned about the menu for the pre-game party than he was to know about the team playing against the Pirates. Regardless of the opposition, he was always going to be sporting Pirate colors, whether in his attire or on his signature purple and gold minivan he drove around Washington.

“Everybody loved him, loved being around him, and he brightened up everybody’s lives,” Futrell said. “It’s a tremendous loss for a number of us personally, for the city and for East Carolina athletics.”

Another close personal friend, David Carraway first got to know Hodges through East Carolina University athletics and the Pirates Club. When he moved to Washington in 2000, Carraway said he got to know Hodges even better, a relationship that only grew when the mayor took office in 2013.

“Many stories could be told,” Carraway wrote after his passing. “One of my favorites is while in Down on Main for dinner one night, I found Mayor Bear and Tom Payne together. I walk over to find Tom writing the mayor’s speech for something Bear needed to be at. We joked about it for many years. With Bear, what you saw is what you got. I feel sure, from the eyes of children, he was truly a big teddy bear. One who they could hug and feel safe.”

Carraway, who filmed city council meetings for years as the city’s information technology director, also had the opportunity to see Hodges in his role as mayor, pushing for progress in the city he loved. Carraway says he saw the way the mayor treated people and how he was always willing to hear their concerns.

“The vision of the mayor is what is happening currently,” Carraway reflected. “Government doesn’t move quickly, but Bear would try to keep those things in the forefront. He truly saw no color in humans and treated all the same. He may not agree with a topic or a project, but he would get all parties involved to make it work. He walked the waterfront daily to meet those who had come to his beloved town. You would see him in every store or restaurant along Main or Market streets. He truly was the cheerleader for Washington. My heart is broken not only for his family but for Washington as well. We truly lost a special soul.”

Another colleague in city government, Washington councilwoman Virginia Finnerty, similarly recalled Hodges’ sense of service and his vision for the city. Of the many improvements Hodges helped oversee, the renovation of downtown Washington’s streetscape was a project that he saw as a path to economic development for the city as a whole.

“I met Mac Hodges very soon after moving to Washington,” Finnerty recalled. “I was eager to be part of the community and volunteered for Washington Harbor District Alliance, at that time he was very involved with the organization. But my close friendship with Mac and Lou started with an invitation to dinner at their house. I had been invited that evening because he wanted to suggest I run for City Council. That was something that had never even crossed my mind. He asked me to please consider it and assured me he would help me in any way he could. The rest is, as they say, is history.”

In the five years since she was elected, the two worked closely together to help bring new life to Washington’s downtown. In doing so, the hope was to bring improvements to the entire city.

“As colleagues, although we didn’t always agree, he respected my opinion and never tried to persuade me otherwise,” Finnerty said. “As friends, Lou likes to say we were like brother and sister, always teasing and joking with each other. Most people took a liking to him instantly. He charmed everyone with his easy-going manner and smile. It was obvious to everybody how much he loved Washington. But I’m not sure they really knew how very deeply he cared — so much so that he often would have sleepless nights worrying about what was best for his city. I feel like Washington has lost not only its mayor, but its most committed champion, and I have lost a brother and a great friend.”

This article originally appeared in The Washington Daily News.