Wanchese resident Lee Martin never fathomed the thought of boating a 77-lb. white marlin while competing in the White Marlin Open out of Ocean City, Maryland. But during the week of August 3 through 9, Lee and his wife Tiffany saw the massive fish land on Drillin and Billin, which Lee has spent the past two years captaining. The prize for this well sought-after catch? $1.76 million.

“It was one of those magical days where the stars lined up just right,” Lee told The Coastland Times a week after his crew placed second in the tournament.

The White Marlin Open is a large billfish tournament that has taken place for the past 47 years. Anglers from around the country compete in various categories to earn the top spot on the leaderboard for the biggest catch of the week.

This year, the tournament wrapped up with two new tournament-record fish, three millionaires and a world record tournament payout. Taking place during Hurricane Isaias, the competition was extended by two days to compensate for the dangerous weather conditions. In the end, the competitors reeled in $6.8 million worth of fish.

Lee and Tiffany, along with Drillin and Billin owner Edward Amos, mate Harrison Stone, Taylor Fields and the crew were on board Friday morning when they saw and hooked four white marlins. The fifth fish, however, stunned everyone. 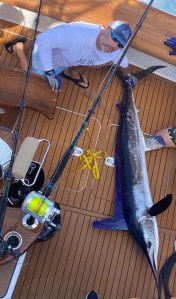 Edward Amos with the 77-lb. white marlin that landed the boat in second place for the White Marlin Open. Courtesy Edward Amos

“We caught all the fish we saw that morning,” Lee said. “When we pulled it [the fifth one] on the boat, we just knew it was a bigger fish.” Lee had hooked the fish himself and handed the rod off the Fields for the final reel. The crew received over a million-and-three-quarter-dollar check, which none were expecting.

“It’s been all of our dreams,” shared Amos. “All of us came from nothing . . . to be a part of something like this, I think that’s why we do so well.”

Amos experienced his first fishing tournament in 1979 with his father. From there, he went year after year. Twenty years later, he started his company that took off. In 2007, he had enough money to buy a large boat and competes each and every year in billfish tournaments.

Drillin and Billin is docked at Pirate’s Cove, alongside some big named stars. For Amos, being a part of such a competition is exhilarating and a chance to just have some fun. “We have maybe too much fun,” Amos laughed, “and if we won, that would just be a bonus.”

“It’s something that you really don’t think will ever happen,” said Tiffany, who is a first-grade teacher at Manteo Elementary. “The fact that I got to share that with him [Lee], watching him do something he loves, was incredible.”

For Lee, the experience was “unbelievable.” With 400 boats having competed, all using the same IGFA equipment and techniques to level the playing field, Lee said the White Marlin Open is one of the four or five “Super Bowls of fishing,” which made the win all the more special.

About 30% of the proceeds go to crew members. Amos shared that handing his crew their checks was moving. “It all comes together,” he said.

As for Lee and Tiffany’s portion, they said it will go towards their children’s school funds, to ensure they can receive continuing education. “We have that chance now,” said Tiffany.

Tiffany’s parents surprised the couple by bringing their two children up to the tournament and the family was then able to celebrate the win together.