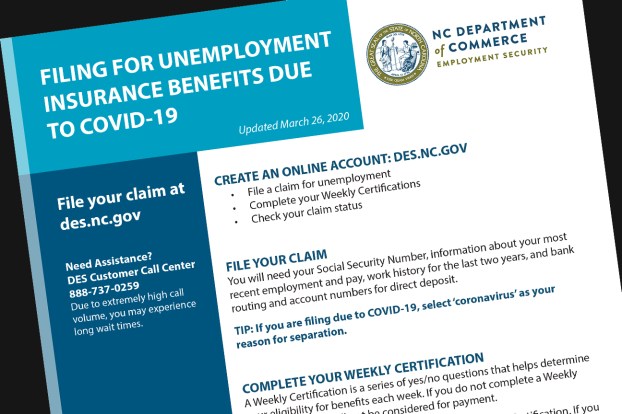 North Carolina’s unemployment rate rose in July, the state announced on Friday, even as the overall number of people working grew compared to the previous month.

The 8.5% jobless rate reflected a large return of North Carolina residents to the workforce last month, as businesses previously under COVID-19 operating restrictions or closures continue to re-emerge. June’s seasonally adjusted unemployment rate was 7.5%. according to the Division of Employment Security.

Over 72,000 more people were employed compared to June, according to division data. But the overall labor force, which includes those who are actively looking for work again, grew by 135,000 during the same period to more than 4.9 million. That left about 63,000 more people labeled as unemployed.

The July rate remains more than double the percentage that North Carolina recorded before the coronavirus pandemic. But it’s certainly well off the peak COVID-19 rate of 12.9% in April. The national rate in July was 10.2%.

The government workforce led the way with 43,400 additionally employed, for a 6.2% increase. June was marked by agency-wide furloughs at the state Department of Transportation. Manufacturers saw the largest workforce decline in July of 5,600 workers compared to June.

The Division of Employment Security announced late Friday that the federal government approved its application for extended federal benefits that President Donald Trump offered in an executive order. The plan will give the unemployed an additional $300 per week. More than 863,000 people in North Carolina have been paid over $7 billion in federal and state benefits since mid-March.

Cooper has said he wanted to offer an additional $400 per beneficiary. But the division — part of the Cooper administration — had said it pursued the $300 option after learning the $2.85 billion sitting in North Carolina’s unemployment benefit trust fund can’t be used to cover the $100 match.

So the extended benefit will apply to those already eligible to receive $100 in weekly benefits and who are unemployed due to COVID-19, a division memo said. For now, the extended benefit will cover three weeks and is retroactive to Aug. 1, when a federally funded $600 weekly unemployment bonus expired. It wasn’t clear Friday when these new payments would be made to workers.

Cooper, a Democrat, decided to seek the $300 payment because “there is not a clear way to fund the $400 option, and this is the faster way to get relief for North Carolinians,” spokesperson Dory MacMillan said late Friday.

Cooper told reporters this week he’d prefer congressional leaders and Trump reach a deal to restore the original $600 extended weekly benefit. MacMillan said Friday that Cooper also would like to work with the legislature on increasing state benefits.

Senate Republicans said separately Friday they were weighing whether to pitch next month to colleagues an increase in the maximum weekly state unemployment benefit, currently at $350. The House also would have to agree with any change.

There are different takes on the generosity of state benefits already offered. While Democrats call them among the lowest in the country, Republicans say they rank in the middle among Southeastern states.

North Carolina man accused of defrauding SBA, others of $800,000