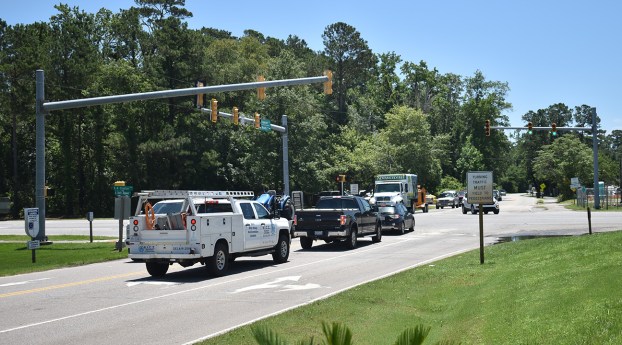 The intersection of US 158 and South Dogwood Trail in Southern Shores. Danielle Puleo photo

Southern Shores Town Council members authorized entering into a contract with a traffic consultant, voted to extend its Ocean Rescue season and amended one section of council’s Rules of Procedure during a September 1 regular session meeting in the Pitts Center.

Approving the evening’s agenda was the first action item for the night, followed by approval of a consent agenda with previous June and July meeting minutes.

Moving to new business items, a discussion on the heavy flow of traffic through residential sections of town during tourist season weekends was on the table.

Faced with an ever-increasing influx of visitors with numbers far in excess of what any roads were built to handle, the heavy volume of summer visitors looking for shortcuts to Duck and Corolla has not only clogged many neighborhood streets, turning roadways into elongated parking lots, but also created a number of quality of life issues for property owners who find they are unable to leave their own homes.

Responding to citizen complaints, council has looked at several possible solutions intended to address the problem.

In addition to establishing a citizen committee tasked with finding a viable option, the Southern Shores Police Department has collected traffic flow data since 2008 at several locations in town including points along NC 12, Dogwood, Wax Myrtle, Sea Oats Trail, Hillcrest and Chickahauk Trail. There have also been several summer weekends when eastbound traffic was prohibited from making a left turn from US 158 onto South Dogwood Trail.

According to town manager Cliff Ogburn, the next best step is to have a professional traffic engineer review the data.

“The goal,” explained Ogburn, ” is to get an independent, outside, objective look at the options.”

Ogburn went on to say NC DOT has agreed to examine its own traffic count data collected on US 158 and NC 12 in an effort to further assist the town with the problem and that at least five consulting firms have been contacted with responses from two expected the week after Labor Day.

“We have a lot of collected data,” said Mayor Pro Tem Elizabeth Morey. ” it seems like a good use of money to look at the options. ”

At the end of discussions, council gave unanimous approval to a motion authorizing up to $7,500 toward a contract with a consulting services that will produce a report providing the town with viable options to address the seasonal cut through traffic.

Roadways have not been the only place with increased numbers.

As the tourist season extends each year, now stretching beyond Labor Day and on into the fall, there has been a corresponding increase in the number of visitors on the beach. The town’s current Ocean Rescue contract, however, only provides full service patrolling through Labor Day with a reduced presence until October 15.

After looking at three different coverage levels for extending the Ocean Rescue contract with their additional costs, council elected to extend the current contract until October 15 and approved having two ATV patrols after Labor Day with no lifeguard stands and no change in the shared supervisor patrol for an additional $13,500.

The final action item for the evening was an amendment to council’s rules of procedure. The change, explained Ogburn, makes it easier to cancel a meeting due to lack of business, an emergency or lack of quorum. An earlier amendment to that section only addressed declared emergencies.