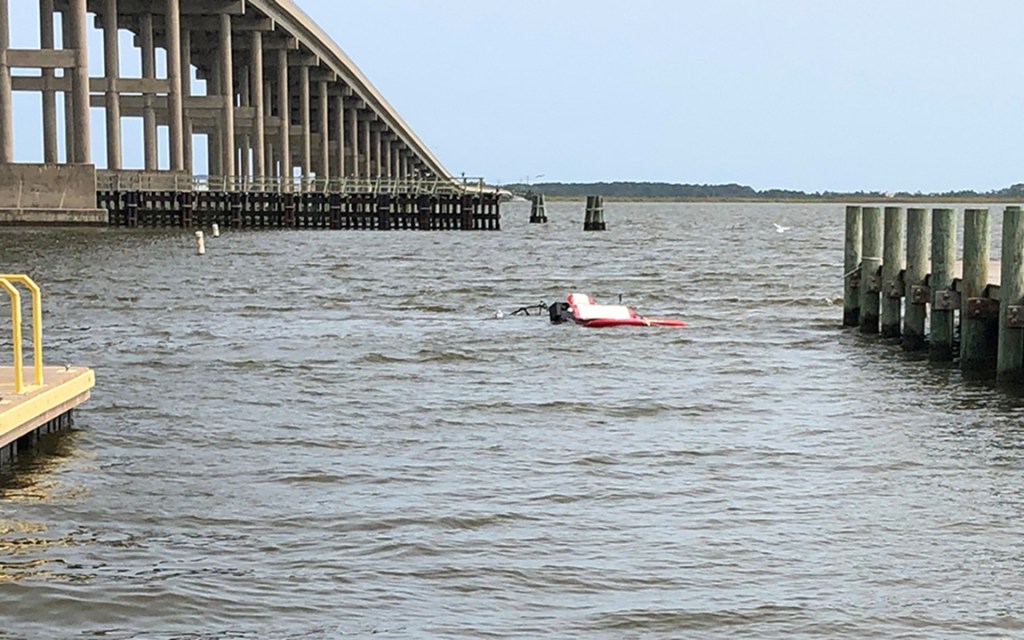 North Carolina Wildlife Resources Commission Law Enforcement Division has reported that on Wednesday, September 16 at approximately 11:30 a.m., a 14’ airboat sank near the boat ramp at the Washington Baum Boating Access Area in Manteo.

The vessel reportedly had one person on board, Michael Hope from Richmond, Va., who was attempting to dock when the vessel took water over the stern.

“The airboat then struck an unoccupied bass boat that was tied to the dock,” according to information from Officer Anna Barbosa, who is the WRC’s investigating officer for the incident. “The airboat then rode up on the bow of the bass boat which in turn caused the stern of the airboat to become submerged and subsequently sink. Officer Amos Williams of the North Carolina Marine Patrol and the Captain of a Charter vessel were nearby and quickly retrieved the operator from the sinking airboat.”

The airboat was eventually able to be retrieved from the water and there were no significant damages to the bass boat that was struck, according to the WRC summary, which also stated that there were no injuries resulting from the incident.

The United States Coast Guard Pollution Response Unit also responded due to fuel in the water.

North Carolina Wildlife Resources Commission is the investigating agency for the incident and found the contributing factors to be the wind, operator inexperience with the vessel and design features on the airboat.

“Captain Jamie Moore, who was not involved in the incident, of the local airboat tour company, Outer Banks Adventures, explained that the direct drive 1:1 gear ratio places the engine higher up in the vessel altering the center of gravity,” stated the information from Barbosa. “A higher center of gravity makes a vessel more likely to tilt during operation.”

NOAA: Catch and release only through remainder of year for blue and white marlin, roundscale spearfish