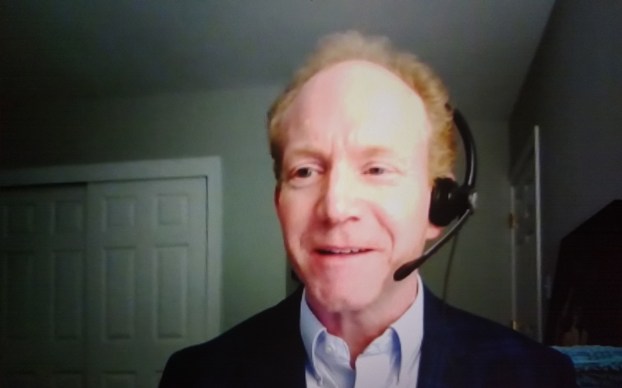 Civil engineering consult Chris DeWitt explained that funding may be available for NC Highway 12 improvements in the area between the Resort Realty office and Sunset Grille. Duck meeting screenshot

In recent years, the marsh and roadbed for NC Highway 12 along Currituck Sound between the Resort Realty office and Sunset Grille in the northern portion of Duck Village has suffered considerable erosion. It was also identified by a Western Carolina study as the lowest point of NC 12 and the most vulnerable stretch of road in Duck.

The only north-south road through Duck Village, NC 12 provides access for thousands of residents and hundreds of thousands of tourists to the northern Duck neighborhoods and the Outer Banks area of Currituck County even further to the north.

According to community development director and interim town manager Joe Heard, some of that area has eroded to the point there is almost no marsh and the Currituck Sound comes right up to the road. To help protect the adjoining highway, North Carolina Department of Transportation has placed rip-rap along several yards of the Currituck Sound eastern edge.

“It is important that NC 12 be kept open,” commented Heard.

He then added that earlier this year, a National Fish and Wildlife Foundation 50/50 matching grant in the amount of $384,011.25 was awarded to the Town of Duck to establish a living shoreline project in that area that would break up much of the wave action there and restore some of the marsh.

In addition, at the end of 2019, Duck was awarded a $147,806 Dare County Tourism Board grant to cover part of the estimated $487,957 needed for the final phase of bicycle and pedestrian improvements through Duck village. The project will include the construction of an approximately quarter-mile sidewalk, dedicated bike lane and landscaped from the northern end of the existing sidewalk at Resort Realty to the existing crosswalk at Sunset Grille.

However, as those two projects were about to go through the permitting process, a new source of money became available.

Chris DeWitt, with the civil engineering consulting and design firm Vanasse Hangen Brustlin, Inc., explained by video link that the real goal for that area has been to raise the road, making it less prone to flooding. Currently the road is between a low of 2.5 feet to a high point of 5 feet.

On September 30 FEMA opened the application period for the Building Resilient Infrastructure and Communities (BRIC) Program, which offers a 75-25 match, meaning the town would need only contribute 25 percent of the project cost.

“Grants are submitted to the NC Department of Public Safety,” explained Heard. “NC DOT owns the road but they are not in a position to fund the project. The BRIC grant would make money available where the town could make the project happen sooner than previously thought possible.”

Heard added that while DOT is not able to participate financially, DOT officials have indicated a strong interest in the project and would support it and work with the town on design and permits. No money is needed now – that will come later – but a letter of intent to design and construct an elevated section of NC 12 is needed this week.

DeWitt said in anticipation of future road work that the shoreline project was designed at an elevation that would allow the road to be raised at some future date with some relatively minor modifications.

DeWitt went on to say the feedback from the state is that by combining all three projects – shoreline, pedestrian and roadway – as one package with three interrelated parts helps meet the town’s hazard mitigation standards and improves the chance of a BRIC grant application approval.

The recommendation to council was to delay action on the two projects already funded and bundle them as one project with three parts because even though it is ready to go, if Duck starts the shoreline project in comes off the table as part of the BRIC grant application leaving the road improvement project with less chance of being approved.

“I don’t see any down side other than the delay,” said Mayor Pro Tempore Monica Thibodeau.

Motions to delay the two funded projects and submit a BRIC grant application was approved on a 5-0 vote.

Heard said a letter of intent would go to the state for review with a reply by October 23 on how viable the project is.

At the request of Dare County Board of Commissioners, Thibodeau, Nancy Caviness and Rob Mooney each agreed to be a Town of Duck representative on the Dare County Tourism Board. County commissioners will select one of the three to replace Chuck Burdick when his term expires on December 31, 2020.

Another board action included creating a new full-time community planner position and added it to the town’s position classification and compensation plans along with a senior planner position. Although the board was in favor of the positions, it was not ready to fund them. Also added to the position classification and compensation plan was the recently filled deputy town clerk/permit technician position.

The Town of Manteo received news Tuesday, October 13 of a reported case of COVID-19 in which the person had... read more