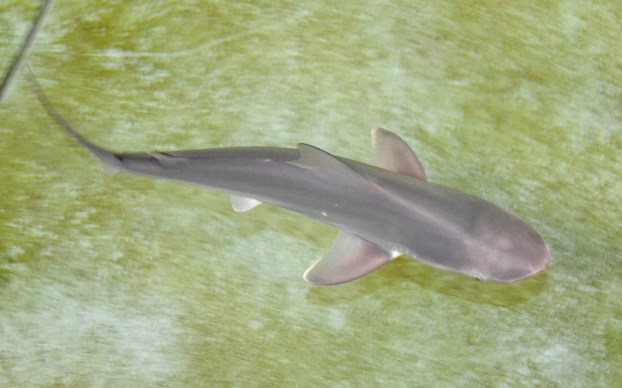 The husbandry team at the North Carolina Aquarium on Roanoke Island informed staff on Thursday, October 29 that the sandbar shark pup born there two weeks prior had died.

“The pup had been under close care behind the scenes since it was born to one of the sharks in the Aquarium’s Graveyard of the Atlantic habitat,” stated a press release from the aquarium. The development came a day after the aquarium shared with the public news of the animal’s arrival.

According to the aquarium, despite two weeks of intensive care and attention by husbandry professionals, the shark had not yet begun to eat on its own and had recently begun to show signs of a possible infection.

“Because of this decline, and in association with the veterinary staff, the decision was made to attempt to assist-feed and administer medication to the pup.  At such a young age shark pups are extremely fragile, and this one did not respond to the medication as hoped,” stated the release. “The team responded quickly and worked closely with the vets, but the difficult decision was made to humanely euthanize the animal.”

“This pup meant so much a lot of people here, and we are all taking its passing extremely hard,” said husbandry curator Elizabeth Huber. “We were so excited to have it with us and to share that excitement with the community.”

This pup was one of two born on October 16. Despite a quick response by staff, including moving the pups to an isolated area behind the scenes, one pup did not survive the night.

Shark pups face many challenges in the first days and weeks of their lives and females bear multiple pups to increase the chances one will survive, according to the aquarium.

“This is one of the realities of animal care. Our dedicated husbandry and vet teams do their very best, especially with animals that are newborn or vulnerable, but things don’t always go the way you would like,” said aquarium director Larry Warner. “And it is still tough on those closest to the animal and who have dedicated their lives to animal care.”