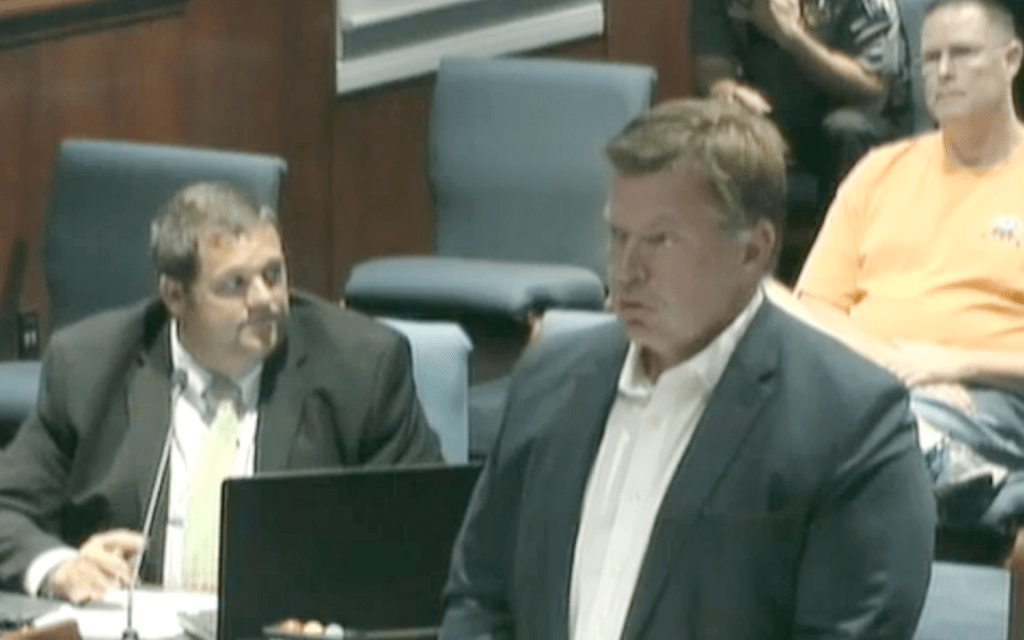 Marc Sisino of Virginia Beach, Va., spoke at the October 19 Currituck County Board of Commissioners meeting about his request to open an automobile sales business at 1383 Caratoke Highway. Currituck meeting screenshot

Actions during the October 19 Currituck County Board of Commissioners meeting included denial of an automobile sales use application, awarding a drainage improvement contract bid and Game Commission member appointments.

In the first public hearing scheduled, Marc Sisino of Virginia Beach, Va. was on hand with a use permit request to open an automobile dealership for people with less than perfect credit at 1383 Caratoke Highway in Moyock.

Staff reports indicate a use permit for automobile sales was issued for that property in 2013 never established.

During discussion on the request, fire and other emergency services access was mentioned as a concern and more than one council member asked Sisino about excess vehicles on the property and the lack of landscaping which was required under a previous permit and still not in place.

According to Sisino, the landscaping was not done due to winter closing in, but that he has made several last-minute improvements to the property. He added that he was willing to meet any restrictions placed on him, but board members did not appear to be convinced that would happen.

A motion to deny the application based on the minimum requirements not being met passed on a 4-2 vote with the support of Chairman Bob White, Mike H. Payment, Paul M. Beaumont and Kevin E. McCord. Selina S. Jarvis and J. Owen Etheridge cast the nay votes and Mary Etheridge was not at the meeting.

A request by Etheridge to revisit a Flora Farm decision also failed to garner enough support.

Etheridge said it was possible the board may not have properly denied the Flora Farm request in a previous meeting by not adopting a consistency statement.

“We need to do it right,” offered Etheridge. “I just want to be fair about it and we should bring it back and dispose of it properly.”

The request opened up a lengthy discussion on policy and procedure that included differing opinions from the School of Government in addition to how an applicant can bring an item back to the board.

White advised that he asked county attorney Donald “Ike” McRee Jr. at the time if another motion needed or to move on; he was advised to move on.

McRee then explained that he based his response on past practice of the county and the manner in which the rules have been interpreted.

He went on to say that in the past when a motion to approve has been denied, then the application is then deemed to be denied and the board continues on with its business and that there have been cases when there was no motion at all, which denied the motion.

White also pointed out that after the motion to deny the Flora Farm zoning change, he asked if there was another motion with none offered. Beaumont then recommended looking at modifying the code to cover the problem.

White said he agreed and suggested it be part of a board retreat. He then moved to deny the motion to renew, which passed on a 4-2 vote.

In other business for the night, commissioners agreed to look at allowing the county Fire and EMS billing company to start charging the Currituck House assisted living center in Moyock and the Currituck Rehabilitation Center in Barco directly for non-emergency EMS transports from those facilities.

According to Ralph Melton, the number of non-emergency calls have increased to the point that if not curtailed, it will prematurely result in the need for an additional ambulance in Moyock just to help cover those calls. When asked about attempts to address the issue, Melton advised that any efforts have produced only short term benefits.

Following a vote of support, county manager Ben Stikeleather said he would confirm the authority to impose a fee and return a fee schedule change.

A Currituck Water and Sewer, LLC public hearing to operate a wastewater treatment facility at 287 Green View Road was rescheduled for November 2 at the applicant’s request.