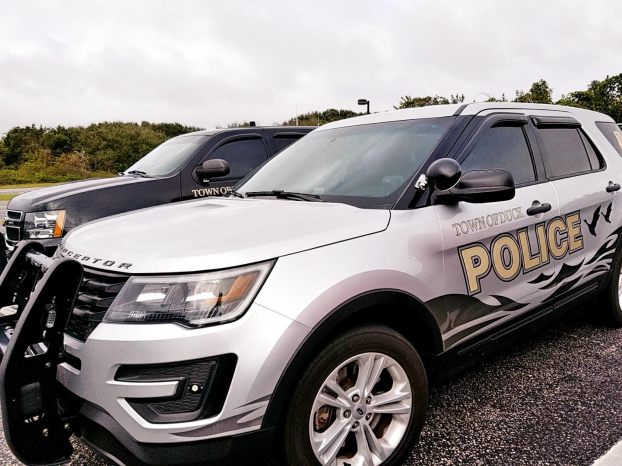 The Duck Police Department has released its monthly report for the month of September.

From September 1 through 31, the department had 792 calls for service, officers issued 44 traffic enforcement actions, 421 business property checks were made with five unsecured doors found. Additionally, one extra patrol was conducted at the request of out of town property owners and one unsecured door was found.

Noted incidents during the month include:

Domestic dispute (Turnbuckle Court) – Officers responded to a report of a domestic in progress and upon arrival found that one party involved had left the residence. According to the Duck Police Department (DPD) report, the female stated there was an argument between her and her boyfriend. No physical assault occurred. The male was driven to the bus station in Elizabeth City by the female’s father.

Domestic dispute (Martin Lane) – Officers responded to a report of larceny prior to this location. The male stated that he and his wife had gotten into an argument and she left in an Uber with his wallet. Officers made contact with the wife, who stated she didn’t have her husband’s wallet but asked for a police escort back to the house to retrieve her belongings. When the wife arrived at the residence both parties decided to stay at the residence together. The husband was not certain his wife had his wallet and said he would look further for the missing wallet, according to DPD.

Domestic (Canvas Back Drive) – Officers responded to a domestic in which a male was reported to have a gun and was waving it around after arguing with family members. Officers on scene found the male unarmed and discussed the situation with the family members. The male subject was taken to a facility for a voluntary mental health evaluation and was released, according to DPD. The subject arrived back at the residence and again police were summoned for a verbal dispute. The subject agreed to leave the residence for the night and left the area in a taxi. The weapon was located and seized and will be held until ownership and mental health status is substantiated, stated DPD.

Fraud (Duck Road) – Officers received a report of a couple failing to pay a full dinner check amount. The couple left $40 cash on a $115 bill. The couple was not identified.

Trespassing (Skimmer Way) – Homeowner called about a census worker that refused to leave his property. According to DPD, once he advised that he was calling the police, the census worker left and he stated he no longer needed a response. Officers responded and checked the area with no action taken.

Dispute (Duck Road) – Female caller stated a male friend took her purse and was stealing money. Male caller believed she had items that belong to him and was not looking for money. Male gave the purse back and locked himself in the bathroom. Female caller left in a cab.

Civil situation (Sprigtail) – Homeowner’s son contacted police regarding a civil matter between his father’s rental property and the tenant. The tenant has reportedly damaged the property and is refusing to leave. The responding officer provided information about the eviction process.

Injury to property (102 Station Bay Drive) – A report of injury to property occurring between January and June of this year where the reporting party stated someone possibly cut an internet cord and electrical system to the irrigation system.

Governor’s order violation (1216 Duck Road) – Report of business not enforcing face-covering order. The business was previously cited for a violation with the court system dismissing the charge, according to DPD.

Assault (Duck Road/E Tuckahoe Drive) – Five pedestrians were accosted by a male and female subject resulting in one person getting struck in the face with a skateboard, according to DPD. The suspects left the area and were not located. The individual struck did not require medical attention.

Traffic crashes reported in September include:

Duck Road – A bicyclist was crossing the street at the crosswalk and did not dismount from the bicycle. A northbound vehicle struck the bicyclist resulting in minor injuries.

Duck Road – A vehicle was backing from a parking spot and collided with a semi-trailer that was parked while unloading items. No reported injuries.

Duck Road/Sandy Ridge Road – A deer ran into the side of a vehicle while traveling on Duck Road. Minor damage to the vehicle reported.

Duck Road/Cook Drive – Report of a hit and run in Duck Deli parking lot. It was reported that a Ford F-150 hit the rear of a parked car and left the scene. The investigation found that the truck did not hit the vehicle and the damage claimed to have been caused was there prior.

Duck Road – Fender bender between two vehicles. Parties exchanged information upon the officer’s arrival and a formal report was not requested.

Duck Road/Sea Oats Trail – Three vehicle rear-end collision. Two vehicles stopped for traffic and a third vehicle hit the back of the second vehicle pushing it into the first vehicle. No injuries and minor damage to two vehicles reported. The vehicle at fault had major damage with airbag deployment and was towed.

More than half of Monday night’s Kitty Hawk Town Council meeting was spent discussing how the July 25 death of... read more