More than half of Monday night’s Kitty Hawk Town Council meeting was spent discussing how the July 25 death of Amanda LeeAnn Fletcher Hartleben has been handled.

On July 22, Hartleben’s boyfriend John Curtis Tolson called EMS to her West Kitty Hawk Road home, saying he found her bleeding and unresponsive. She died in a Virginia hospital three days later from complications of blunt force trauma to the head. Finding blood stains in several rooms and on different items around the house, members of Hartleben’s family said they suspected foul play and insisted Tolson was involved. Three months later, on Monday, October 26, Tolson was charged with one count of second degree murder and taken into custody for Hartleben’s death.

Leading Monday night’s procession of speakers was Hartleben’s cousin Trisha Cahoon, who along with Brian Lee, Pete Roberts, Rebecca Patino and Carl Seto gave council a laundry list of issues they wanted addressed. Some speakers used all of their allotted three minutes plus some. 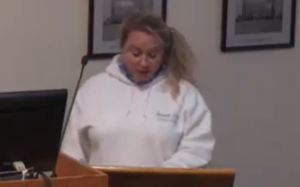 Claiming Johnson, Investigator Brian Strickland and Womble did next to nothing, more than one speaker stated that police mishandled the investigation from the beginning, with a delayed entry to the scene, not securing the scene, failing to collect important evidence and charges coming only after a private investigator was hired.

Some went so far as to say they had been lied to, Hartleben’s character had been maligned and there is a leadership problem and Johnson should be removed.

“There are some good guys at the police department,” said Seto, “but three or four need to be gone.”

Mayor Gary Perry was also criticized for his comments in support of the Police Department during the October 5 meeting while other council members sat idly by.

In response, Jeff Pruitt said as a rule, council does not engage in public comments.

“We hear you but we don’t usually speak,” said Pruitt.

“This is a public comment session, not a question and answer,” added Craig Garriss.

Perry then explained not responding helps avoid getting into arguments since it is not the proper place for that to happen. He went on to say that during the October meeting, the young lady that first spoke was very nervous but spoke eloquently in spite of her nervousness.

“She stopped and looked at us for some sort of an answer,” Perry continued. “And I gave her an answer to what the situation demanded at the time. The statements I made had nothing to do with a legal attorney and council members did not know that was coming. That was in answer to what I saw needed to be answered at the time and that’s what I did. Then we allowed everybody to come up and speak.”

Perry said also that he does not do social media and due to the uproar in the community he received a brief overview just so he could understand what was going on.

Later, near the end of the meeting, Garris commented that for those listening, if there are issues council needs to look at, it certainly will.

David Hines agreed, adding, “Everybody is very sympathetic with what is going on. It’s just not our place at this point in time, in my opinion, to go back and forth right here like that. I don’t think anybody sitting up here doesn’t care. There is a time and a place for a forum and things to take place. I get the impression that the people in Kitty Hawk think that we don’t care and that is simply not true.”

Adding her point of view, Lynne McClean said she listens to people when contacted, but her phone was not ringing off the hook and there were no emails from anyone; then all of a sudden, council is pulled into a controversy.

“Everything you say is correct,” added Perry. “We do care, we always have cared and we still care. We want this to come to an end of some sort, but it has to have a proper process.”

Perry then added that he still supports the Police Department, but some of the things that were said are disturbing, and if any of it is true, he would discuss them with town manager Andy Stewart and get to the bottom of that, but in a proper fashion and in accordance with the law.

“We appreciate you coming out,” he concluded. “We don’t mean to interrupt, and don’t normally, but sometimes a question comes up that needs to be answered. And sometimes it is hard to answer when people are emotionally involved.”

In other business for the night, a conditional use permit request for Sheepdog Ministries to establish a church and gym at 3834 North Croatan Highway in Kitty Hawk Plaza was approved.

According to Planning and Inspections director Rob Testerman the overall development is actually three side by side multi-tenant properties contained in one structure. The church will be in the former Cottage Chic store next to Daniels’ and serve as a place of worship, host health and fitness and nutrition activities and hold small group Bible studies along with self improvement and addiction recovery meetings.

Fellowships are expected to take place primarily Thursdays and Saturdays evenings for up to 50 people when other businesses there will be closed, leaving the entire parking lot available with smaller groups during other times during the week.

In a separate action, $6,200 was approved for the purchase of two LED solar powered traffic signs. Stewart said the signs are similar to ones used in Duck and will be mounted on posts in areas for six months or longer, but are movable to other areas that have traffic issues. Money for the purchase is already in the budget from drug enforcement funds and police car equipment money left over. The town will keep the portable speed trailer.

It was also announced that large item pick-up will be November 16.