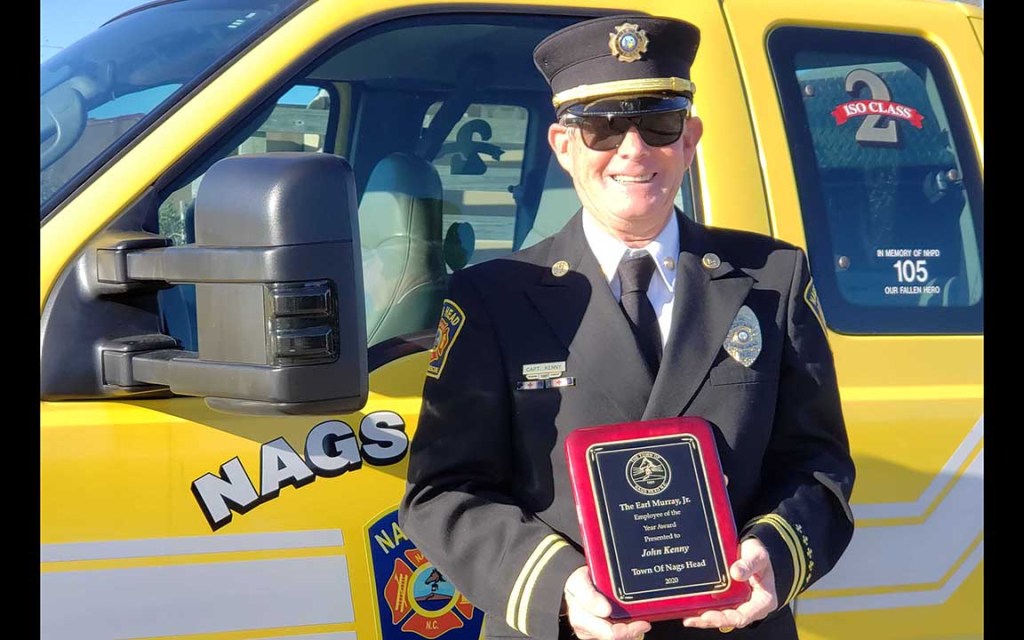 Careful of the need to maintain proper social distances, candidates for the annual Earl Murray Jr. Employee of the Year Award were ushered in and remained on one side of the room during the presentation session.

“Recognizing our employees is one of the most meaningful things we do,” said Mayor Ben Cahoon just prior to announcing that John Kenny had been selected for the 2020 award.

Kenny joined Nags Head in June 1987 as a water services technician in the Public Works Department. In March 1989, he completed firefighter training and joined the Fire Department where he worked his way up the chain of command to the rank of captain.

Presented each December, the award is named in honor of former police Sergeant Earl Murray who died in the line of duty in May 2009. Other nominees for the awards included police Officer Brandon Bostwick, tax collector Linda Bittner, Planning and Development Department administrative assistant Kim Thompson and sanitation equipment operator Anthony Beasley.

With most of the day’s remaining speakers participating via televised video links, council members were introduced to Terry Haugen as the interim Public Works director. Haugen comes to Nags Head after working with at least five other municipalities. He will be filling in during a search to replace Ralph Barile, who retired October 1 after 38 years with the town.

Making his appearance via video link, Terry Gray offered a word of thanks to the Nags Head Police Department for its assistance with the Dare County Motorcycle Toy Run.

According to Gray, COVID restrictions canceled an April ride, but after restrictions were eased, a September run was scheduled as part of a two-day event. Although fundraising fell short of the $50,000 goal, Gray said enough was collected to buy toys for about 1,000 Dare County children.

Gray said a plaque had been sent earlier for the police chief in appreciation of police assistance with the event.

Other business for the day included:
– Commissioners approved a resolution opposing the installation of additional Dominion Energy power poles along US 158 with a request that the North Carolina Utilities Commission deny installation of additional above ground infrastructure, to include a second row of power poles, within the US 158 corridor through the Town of Nags Head.

– Commissioners passed a resolution requesting the State of North Carolina to provide $1,408,247.19 to the town in financial assistance from the NC Department of Environmental Quality Coastal Storm Damage Mitigation Fund for a beach restoration project.

– Commissioners authorized up to $32,286.00 for Moffat & Nichol to conduct a hydro-graphic survey and data evaluation of the offshore sand borrow areas to obtain updated borrow area survey information needed to assist with permitting the borrow areas for the upcoming post-Dorian beach restoration project.

– Commissioners appointed Bettye C. White to fill a vacancy on the Arts and Culture Committee. It was noted that White, a retired teacher and part-time resident property owner, was the only candidate for the position. Other committee members include: Leslie Erickson, Ginny Flowers, Kerry Oaksmith-Sanders, Peggy Saporito and Samantha Lock.

– Commissioners scheduled a public hearing on ordinance changes for the definition and uses of furniture store and furniture showroom, warehousing and storage facilities, building contractor’s offices and related regulations.

– Discussed recommended registration guidelines for events at private residents with more than 50 people at a residential property.– Discussed relaxing setbacks on some corner lots.

– Discussed talking with NC DOT about including an automated messaging light on the causeway at the beginning of the 45 mph speed limit.

– Discussed the need to be proactive in reviewing the changing demographics of the area since much of the budget is derived from occupancy tax collections.

With business for the day concluded, council entered a closed session with the town attorney to discuss pending legal issues with no action taken and then recessed until a 9 a.m. December 16 workshop.