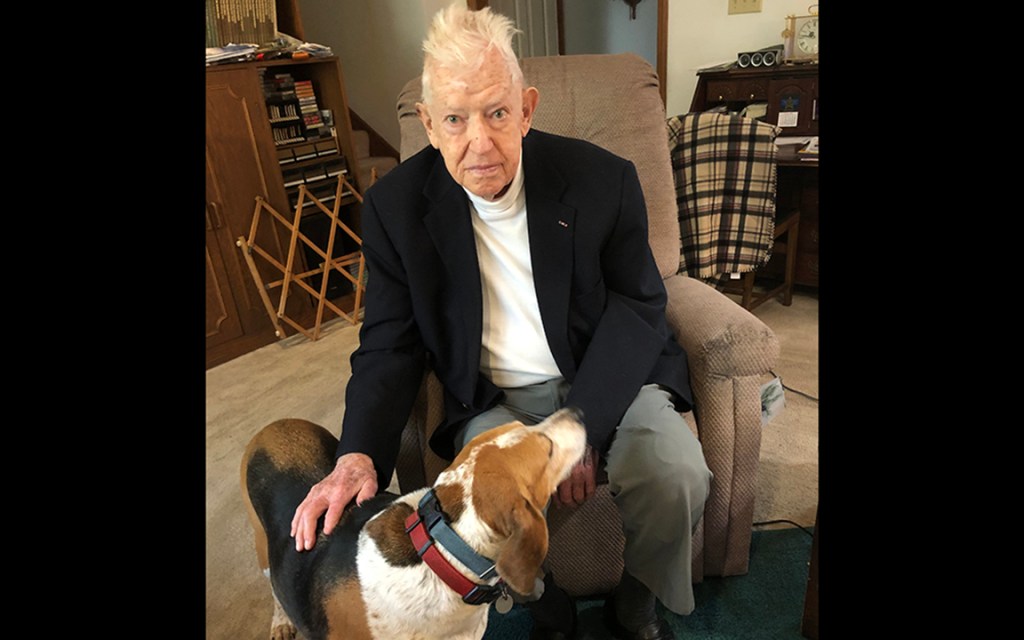 Turning 100 years old today, December 16, Southern Shores resident Warren B. Davis recently reflected on just how different life is today from when he was born.

History buffs might tell you that back in 1920 the United States consisted of only 48 states; the Volstead Act banning any manufacture, transportation or sale of intoxicating liquors was the law of the land; electricity and indoor plumbing were fairly new features for homes outside of most larger cities; and movies were primarily black and white silent films.

When asked about the most dramatic changes he has seen over the past 100 years, Davis ranked communication at the top of his list.

“When I was a small child in Muskogee, Oklahoma,” Davis explained, “we would pick up the phone and a switchboard operator said ‘number please.’ You would tell them and they would make the call. Today almost everybody has a phone in their pocket that will do all kinds of things. But I don’t have a smart phone, I have a dumb phone. It will do for talking, but not anything else like my children’s phones.”

Another change over the years has proven to be a challenge. According to Davis, computers were huge monster devices back in the early days. Now they have grown smaller with all sorts of complications.

“That computer of mine in there is the bane of my existence,” he added with a chuckle. “Bank people are forever accusing me of doing something wrong and cutting me off from my bank account. I understand that it is for my protection, but every time I make a mistake, they cut me off and I have to go to the local bank people and have them help straighten it out for me.”

No stranger to providing help himself, Davis has been there for others more than once.

With a degree in petroleum engineering in hand, Davis went to work for Gulf Oil Corporation in Tulsa in 1941. When World War II broke out in 1942, he left for the Army Air Corps.

“I was in the Eighth Air Force for two years in England,” he explained. “As a squadron engineering officer with about 100 mechanics working for me our job was to keep a fleet of B-17s flying.”

Davis explained that when his bombers took off to bomb the Third Reich, engine failures would sometimes force a pilot to abort a mission before dropping their bombs. Analyzing the problem, Davis and a line chief soon found a way to detect engine failures ahead of time.

“We had the lowest abortion rate in the Eighth Air Force,” he said with a smile.

After the war, Davis was back with Gulf Oil Corporation working his way up to chief economist in the planning department.

Before long, Davis was also a designated problem solver.

“That’s what I ended up doing for the Gulf Oil Corporation,” he continued. “When a top executive at the Gulf Oil Corporation had a difficult problem, it landed in my lap and I would go to work solving it for them. They never gave me a piece of the corporation to run for myself, but I was always a staff person and my salary was a vice president salary by the time I retired. Executives were asking for me because they wanted me to work for them. And that does wonders for your salary when you have several executives that want you and are willing to buy you from the other guys.”

When Davis retired in 1983 it was to the Outer Banks with his wife Jane.

“I’ve lived in cities all the time and that was one of the main reasons we moved here,” Davis explained. “Muskogee is a fair-sized city and Tulsa is a big city. I moved to Pittsburgh at the instigation of Gulf Oil Corporation and Pittsburgh is a big city. When I retired I wanted to get away from the city and this is the boondocks here.”

While many people prefer a slower pace of life during retirement, that was not the lifestyle Davis wanted.

“My attitude about retirement was you can’t sit around and do nothing,” Davis explained. “I feel like a person should do something for the community and I’ve tried to do that for the 36 or 37 years since I’ve moved down here.”

Reading a list of his volunteer activities, one might wonder just how he found time to work them all in.

An active member of Outer Banks Presbyterian Church, Davis has served as an elder on the Board of Trustees and as Sunday School superintendent. Add to that his work with the Outer Banks Hotline that included working in the Thrift Shop and as treasurer of that organization.

In addition to serving as Southern Shores Civic Association vice president, Davis was also on two association committees, volunteered with the Outer Banks Forum where he was director and treasurer, volunteered with the Dare Literacy Council as well as being a math and English tutor for College of The Albemarle students at both the Elizabeth City and the Manteo campuses.

Not one to sit around, Davis spent a lot of volunteer hours with the US Fish and Wildlife Service building red wolf houses, working on pump stations and working at welcome center kiosks. That included one day per week at the Pea Island Visitor Center between 1985-2010 and one day per week at the Manteo Visitor Center from 2010-18. And don’t leave out the Coastal Wildlife Refuge Society, where he was treasurer between 1991-2016.

For anyone interested in his sports involvement, Davis also served as a starter for high school and Senior Games track meets.

“I thought it was something I could do for my youngest daughter,” said Davis. “She was a distance runner in the Pittsburgh area. Coaches were doing it and that’s bad business for a coach to be a starter. The coach needs to be free to coach the team. So I got a guy to teach me how to be a starter for track races. And my son was interested in baseball, but I couldn’t take the time to manage a team, so I became an umpire for several years.”

Davis went on to say he continued serving as a track meet starter after moving to the Outer Banks until he was about 80.

“In the meanwhile, I was drafted to start the Senior Games meets,” he continued. “I didn’t quit them until I was about 90. I tried to quit once or twice but the guys running it said they didn’t like my replacement and asked me to please come back. So I was back starting again, but at 90 my left knee started acting up and I couldn’t hurry across like you need to do to start a meet. So I quit that when I was 90.”

Well known throughout the community, Davis was named a North Carolina Outstanding Volunteer and received a US President’s Committee on Service and Civic Participation Service Award.

That’s not to say life has been smooth sailing all the way.

In 1989, his first wife Jane passed away from cancer complications. He married his second wife Susan, a Norwegian woman, in 1998 and she died after a long illness in February 2005.

“No more wives,” Davis said with a chuckle.

Even without matrimony in his future, Davis has his rescue dog Ness, his four children: Jan Partin, Connie Davis Young, Beth Eddy and Jim Davis, as well as nine grandchildren and 11-great grandchildren to share his memories with.

And his advice for young people today?

“If you want people to hire you for a job that will pay you a salary,” Davis advised. “Then study science and mathematics in school. If you come out with a degree in science or mathematics or engineering or something like that, people will grab you up right away and pay you a good salary. And if you insist on something that amuses you for university studies, you will probably find yourself looking for a job all the time.”

First cold-stunned turtles of the season arrive for treatment…