At inauguration, Cooper calls to strive for shared goals 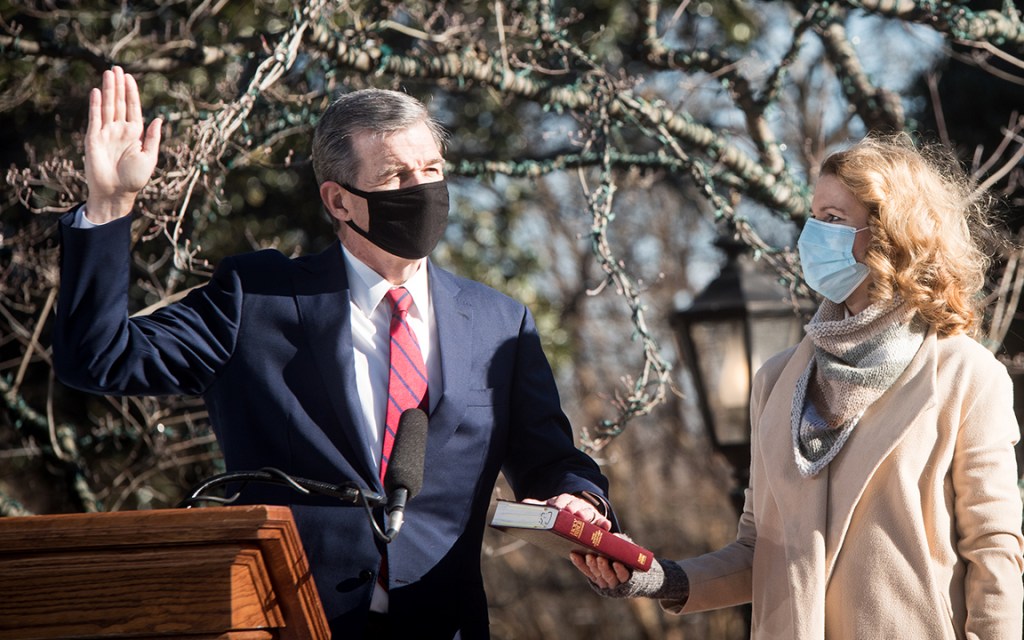 North Carolina Governor Roy Cooper takes the oath of office to be sworn in for his second term on Saturday morning. Kate Medley photo

Starting his second term, North Carolina Gov. Roy Cooper on Saturday called on residents to learn from the state’s recent triumphs and trials and to commit to shared goals for education, health care and racial equality, and to “cherish our democracy.”

The Democrat emphasized COVID-19’s continuing challenges and condemned last week’s violence at the U.S. Capitol during an inauguration ceremony for him and the other Council of State members — truncated due to safety concerns about the pandemic. While he and eight other leaders came in person to be sworn in, his inaugural speech was prerecorded, as were other portions of the ceremony.

During the address, he pledged to meet the state’s challenges squarely and professed North Carolina was poised to “roar again.”

“This new year and this new term as governor is more than just turning the page of a calendar. The lessons we’ve all learned must usher in a new era,” Cooper said in a video message. “An era where we can acknowledge and work around our differences while refusing to sacrifice truth and facts at the altar of ideology. Where the dangerous events that took place at our nation’s Capitol can never be justified.”

Saturday’s ceremony, accessible to the public only by television or online, was limited to a small stage erected in front of the Executive Mansion. Performances by North Carolina musicians including Nnenna Freelon, Ben Folds and the Steep Canyon Rangers were prerecorded. Law enforcement closed off streets around the mansion, and the presence of officers and police cruisers was heightened. State police officials didn’t identify publicly any particular threats.

Cooper’s address focused heavily on the coronavirus, which is blamed for more than 7,400 deaths in North Carolina. Nearly 4,000 people with COVID-19 were hospitalized earlier this week — nearly double the number compared to a month ago. The state announced on Saturday a record 11,581 additional cases.

“As we enter 2021, we carry the imprint of our people’s frustration and loss as well as our determination and resilience,” Cooper said. “I hold close the memories of the suffering and the heroic North Carolinians.”

For Cooper, who won reelection after defeating then-Lt. Gov. Dan Forest in November, the condensed celebration marked a second time his inaugural festivities have been scaled back. Approaching snow and sleet in January 2017 forced cancellations of a traditionally open-air public swearing-in ceremony and ensuing inaugural parade. Both were scuttled again this year. This year’s inaugural gala was postponed.

Still, Cooper and eight other winners in the November elections made the best of the situation by reciting their oaths administered one by one at the dais by Chief Justice Paul Newby. Participants were limited to seven guests, told to wear masks and encouraged to get COVID-19 tests before Saturday. Five-term Agriculture Commissioner Steve Troxler was the only council member who didn’t attend in person because of virus concerns, a campaign spokesperson said. The program aired Troxler’s recorded swearing-in.

Cooper, who is barred from seeking reelection in 2024, had hoped to enter a second term with Democratic majorities in both chambers to press his agenda forward. But Republicans retained their decade-long control of the General Assembly, although their majorities aren’t veto-proof.

A similar state government split the past two years led to a budget impasse that never got settled. Cooper’s bid to expand Medicaid to hundreds of thousands of people, opposed by GOP leaders, was the crux of the stalemate. Cooper created a health care task force last month in a bid to find common ground with Republicans.

The governor called “red counties” and “blue counties” artificial divisions and urged they be set aside to meet goals of ensuring all people can afford to see a doctor, get a quality education and land good-paying jobs.

He also said he hoped the state’s “overdue reckoning on racial justice,” a reference to 2020 protests following George Floyd’s death, would lead to reforming systems that “hurt people of color” and to an economy “that leaves no one behind, no matter who they are or where they live.”

Referencing the aftermath of an influenza pandemic of 100 years ago that killed nearly 14,000 North Carolina residents, Cooper opined that the state was now in a similar place economically to the 1920s: “North Carolina is ready to roar again.”