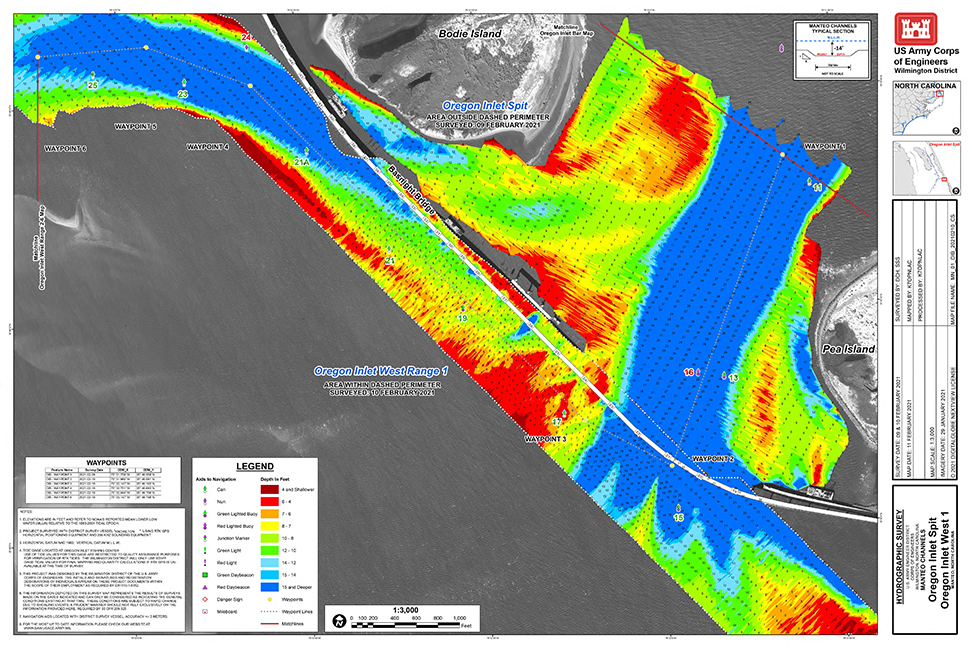 The west side of the Marc Basnight Bridge is shoaled so badly the U.S. Coast Guard cannot navigate the inlet for ocean rescue. The U.S. Army Corps of Engineers is sending the sidecaster Merritt and hopper dredge Merden to dredge a channel. Both dredges will also work on the South Ferry channel in Hatteras Inlet.

Both Oregon Inlet and Hatteras Inlet are badly shoaled.

At two different meetings, the U.S. Army Corps of Engineers announced its dredging schedule to address the problem at the Dare County inlets. At both the Dare County Waterways Commission and Oregon Inlet Task Force meetings, Joen Petersen represented the Corps.

Information was presented at the meetings about the degraded conditions hampering U.S. Coast Guard capabilities to perform search and rescue operations, however that information has since been clarified by the Coast Guard.

The U.S. Coast Guard can still perform search and rescue off Oregon and Hatteras inlets.

A multi-layered approach to search and rescue provides resources like a helicopter out of the U.S. Coast Guard’s Air Station Elizabeth City and Coast Guard cutters patrolling off North Carolina. Cutters are diverted from missions to assist with search and rescue operations.

At Hatteras Inlet, because of shoaling in the South Ferry Channel, the U.S. Coast Guard’s 47-foot motor lifeboat cannot transit the inlet. The Coast Guard’s smaller vessels can still transit out of that inlet, but are limited by distance offshore, sea state and winds, reports Cavanagh.

NCDOT ferries are running between Hatteras and Ocracoke. The ferry terminal on the south side of the inlet is accessible without going through South Ferry Channel.

U.S. Army Corps of Engineers has a dredging schedule to address shoaling in Hatteras and Oregon inlets.

The sidecaster Merritt arrived in Wanchese Thursday, Feb. 11. The next morning, it worked for an hour on the west side of the Oregon Inlet bridge and then returned to Wanchese. Its job is to cut a pilot channel. Then the hopper dredge Merden will come from Virginia and work west of the bridge for a week, while the Merritt goes to Hatteras Inlet around Feb. 15-17 to cut a channel for the South Ferry Channel. Then, Feb. 22 to 23, the two Corps dredges will flip again.

Petersen said not to hold the operation to the exact dates.

Oregon Inlet dredging is funded by the Corps with an extra $500,000 requested by U.S. Rep. Greg Murphy. Dare County holds the dredging permit for the South Ferry Channel and will pay for that dredging.

About Hatteras Inlet, Dan Oden said watermen were nervous about the inlet. “It closed up in a month.”

At Hatteras Inlet, an underwater archeological survey must be completed to address the erosion at the ferry docks on Ocracoke. A survey crew needs three days to complete the survey. NCDOT has asked for a meeting with the state’s Department of Environmental Quality to establish a timeline to finish sheet pile work and open up stacking lanes at the Ocracoke ferry docks on the south side of Hatteras Inlet. 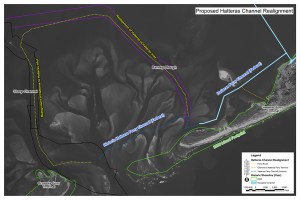 The U.S. Army Corps of Engineers is working to realign the various channels now in use in Hatteras Inlet.

At both inlets, buoy placement is a problem. In Oregon Inlet, the route around the wreck of the Lois Joyce takes boaters between the wreck and the beach. To set the navigation aids, the U.S. Coast Guard needs the construction tender Smilax. The Smilax has an eight-foot draft, which means the pilot channel must be dredged for the Smilax to get out to the Lois Joyce.

Ryan Agre with the U.S. Coast Guard told the Waterways Commission that at the South Ferry Channel, there was “not much we can do with the buoys.” A message has been posted for mariners that shoaling is in the area and to “use caution in transiting the area.”

Again, at the two meetings, state legislation clarifying the definition of terminal groin was discussed.

At the Feb. 8 meeting of the Dare County Waterways Commission, the H.B. 44 and S. 26 agenda item was delayed to the March meeting.

Commission member and Dare County commissioner Danny Couch suggested that the legislation might be helpful in the beach nourishment effort in Buxton and urged endorsement.

Waterways Chairman Steve Coulter said he needed to read the legislation first and set the discussion for March 8.

The Waterways Commission meets the second Monday night of each month.

The next morning, Feb. 9, the Oregon Inlet Task Force met. About the legislation, member Harry Schiffman said “I though it a bit askew.” He brought two documents to the meeting and said the legislation was “not in concert” with the U.S. Army Corps of Engineers.

One of Schiffman’s documents was a letter dated Aug. 2, 1996, from Tom Jarrett, who was at the time the Corps Wilmington District chief of the Coastal, Hydrology and Hydraulic Section. In the letter, Jarrett described the functioning of a terminal groin on the northside of Oregon Inlet and said the “only way to effectively control sediment transport into the inlet is through the construction of jetties and the initiation of a sand management plan.” The second document was Corps list of definitions.

Chairman of the Oregon Inlet Task Force Jim Tobin observed that the state legislation was attempting to redefine a definition used nationwide.

Corey Weber, general counsel for U.S. Senator Thom Tillis, monitored the Oregon Inlet meeting. She said “we want to work with you all.” She also said a published report mischaracterized Tillis’ work on the proposed legislation.

The Waterways Commission adopted a long range work plan with an addition for the Rodanthe Federal Channel and Emergency Ferry Route. The commission will request that the Dare County Board of Commissioners support a resolution that stresses the importance of funding and continued maintenance of Rodanthe’s federal channel and the emergency ferry route. The resolution will be addressed to NCDOT and state and federal representatives.

The plan states “by utilizing the state and Corps Long Term MOA and the NCDOT and Corps MOA, funding can be appropriated to take advantage of the proposed Corps pipeline contract in FY 2022 (October 2022).