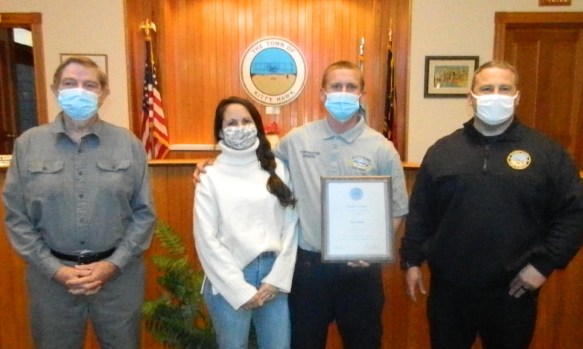 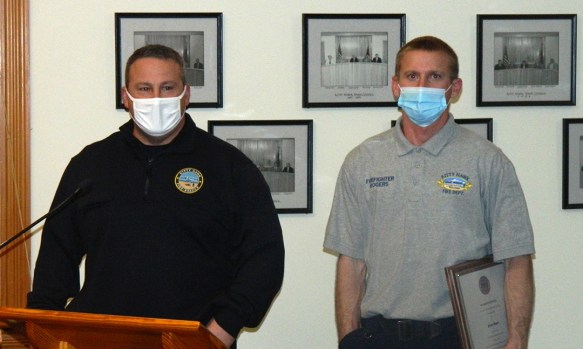 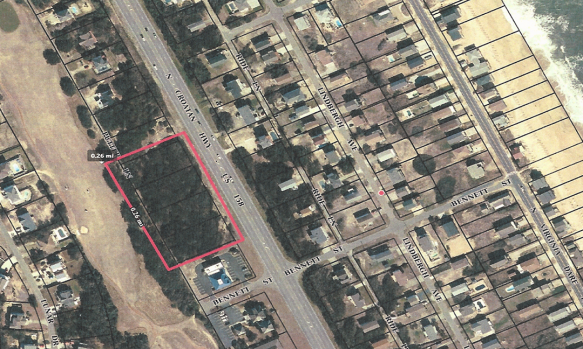 The Kitty Hawk Town Council recognized one employee, allocated money toward a new police, fire and EMS station and directed staff to initiate a study on developing Hurdle Street and to identify any encroachments at its Monday, March 1 meeting.

According to Talley, Rogers has actually been around a while longer, starting as a volunteer with Kitty Hawk in 2011.

“He has been full time for the past five years,” explained Talley. “He has truly been a part of our recent success and I count on him because he always comes through and goes above and beyond. I am very glad that he is a team member we can count on and highly recommend that we keep him.”

In the next agenda item, town manager Andy Stewart explained that a regular audit review revealed that in addition to its regular budget items, the Town of Kitty Hawk has $3.5 million in a restricted emergency reserve fund with another $4,079,047 in an unrestricted reserve account.

While the restricted emergency reserve money – as required by town resolution – can only be used for emergencies or unanticipated expenditures when approved by Town Council, the unrestricted reserve balance is money set aside for any other unplanned or unexpected expenditures not identified in any current budget year.

Stewart went on to say in recent years unrestricted reserve money has not been needed and that over time the balance has accumulated and continued to grow. Although it is important to maintain an adequate unrestricted reserve balance, according to Stewart, $1.5 million should be enough to ensure adequate budget flexibility for the town.

His recommendation to Town Council was to keep a $1,500,000 balance in the unrestricted reserve and use the excess $2,579,047 for capital purchases or designate it for other future projects.

By unanimous vote, council designated $500,000 toward a new fire department apparatus to replace a 31-year-old truck with ongoing maintenance costs and put $2 million into the police station fund. The remaining $79,047 from the unrestricted reserve fund will be designated later.

In a separate action, council then voted to request qualifications from interested engineering and architectural design firms for the construction of a new police, fire and EMS substation facility.

According to Stewart, the town has for several years been working toward moving the police department from a flood prone area on West Kitty Hawk Road into a new building on US 158. The town already owns a 1.83 acre parcel with enough room for a 6,000 sq.  ft. police department along with another 4,000 sq. ft. for a fire and EMS substation. The anticipated project cost is estimated at $3,200,000.

The final council action for the night was a vote to have the town manager conduct a survey of paper street Hurdle with the survey establishing town owned property with clear boundary markings and any improperly encroached signage indicating private property or no trespassing are to be removed from established public property.

After a brief Recreation Committee discussion in December on potential parking places, with no recommendations on any actions, the town was flooded with letters and email messages voicing opposition to developing Hurdle Street or any nearby beach access parking area.

A number of concerns focused on diminished quality of life, increased traffic flows, concerns for dune integrity, lower property values, private land being usurped and flooding. And although almost all writers agreed more parking is needed, the prevalent theme seemed to be that any other place would be a better one.

Reading from a written statement, Mayor Gary Perry advised that any attempt to develop additional parking would come only after a thorough engineering study of the selected property and surrounding area. Additionally, past flooding referenced does not take into account the fact that pump out piping using portable pumps has been installed and was used successfully during the Matthew event. It was stated that asphalt would be appropriate if Hurdle is paved, but a properly engineered parking lot can and should use pervious pavement, which is allowed in the Town of Kitty Hawk.

He went on to say most wrecks occur on US 158 with very few on NC 12 and any dune work would have to meet CAMA guidelines to protect dunes, unlike what currently exists.

Several emails also recommended using Post Office property land near the bath house. In email responses to those comments, Perry advised that there have been attempts to do so but that property is owned by the federal government’s General Services Agency, the most frustrating agency the town has dealt with, and all efforts have fallen on deaf ears, leaving no room for expanding the bath house property.

During discussion, Mayor Pro Tem Craig Garriss said, and others agreed, that it might be money better spent to look at all paper streets since nobody was sure how many paper streets are in town. No additional motion or motion amendment was offered.

Also discussed was a belief that part of Hurdle Street was taken by private property owners to enable a house to be located on an adjacent lot. When asked about that, town attorney Casey C. Varnell advised that when a variance is granted, no land is given, just a change in allowable setback.