After many hours of public hearings and deliberations, the Currituck County Board of Commissioners approved the conditional rezoning request of Flora Farm from agricultural to mixed commercial residential, which will allow for a subdivision with 277 single-family dwelling lots, as well as neighborhood units and amenities such as a dog park, walking path, pool and gazebo. Forty-one percent of the proposed plan will be open space.

The Technical Review Committee (TRC) had concerns with the amendment, specifically in the realm of inadequate public facilities, namely the capacity of Moyock Elementary School, which is already above capacity. Flora Farm is proposing 171 dwelling units in the Moyock Elementary School district. Though the county has plans to increase school capacity, according to Laurie LoCicero, planning and community development director, “The standard says that we have them in place now.” According to the TRC staff report presented to the Board of Commissioners, “Approving the rezoning without adequate public facilities currently in place would be inconsistent with the intent of the UDO.” 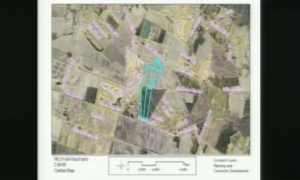 Many disagreed. Vice Chairman Paul E. Beaumont stated that the UDOs, specifically as they relate to the school capacity conversation, exist as a guide, to ensure that the county actively pursues the proper public facilities when needed.

The application for the rezoning included two new conditions regarding drainage improvements and phasing, two items of concern for the county. Condition one would extend the Rowland Creek drainage improvements to the Eagle Creek pump station, with agreement from Eagle Creek, as well as make improvements to the drainage ditch along the property based on the results of the stormwater modeling of existing conditions to manage a 100-year storm event and provide stormwater storage, including berms as necessary. Condition two included details of the five phases of the project, notably that phase one will begin before June 1, 2022 and will not contain more than fifty-five lots. This phasing will allow the county time to provide adequate classroom space for the projected increase in students by August of 2023.

Two commissioners opposed the amendment. Mary “Kitty” Etheridge reminded the board that “we ran on controlling growth and doing the will of the people,” she said. “The people of Moyock have worked real hard and given a great deal of input onto the Moyock small area plan and this development is not consistent with their decisions. I am committed to the will of the people and I cannot support this rezoning. And we as a board at our strategic retreat said that our number one goal for Moyock was to control growth.” 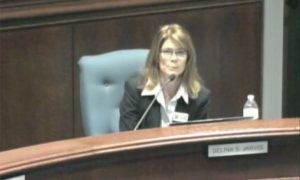 Commissioner Selina S. Jarvis added her concerns before the vote regarding the traffic. “I am still concerned about the potential traffic impact,” she said. Though the project is drastically reduced from its original proposal of 285 single family homes and 125 multi-family units plus 100,000 square feet of retail space, Jarvis still believes that the traffic ramifications to be significant for people “who thought it was a rural lifestyle.” She continued, “I know and I respect that they’ve reduced the number of trips, but it’s still alarming to me that we are going to have one more additional signalized light when Fost [development] comes and filtering an additional 6,322 trips is very concerning to me. I have a lot of concerns about how a project with 277 single family lots is going to affect that area.”

The board was divided, but voted 5-2 to approve the Flora Farm zoning amendment.