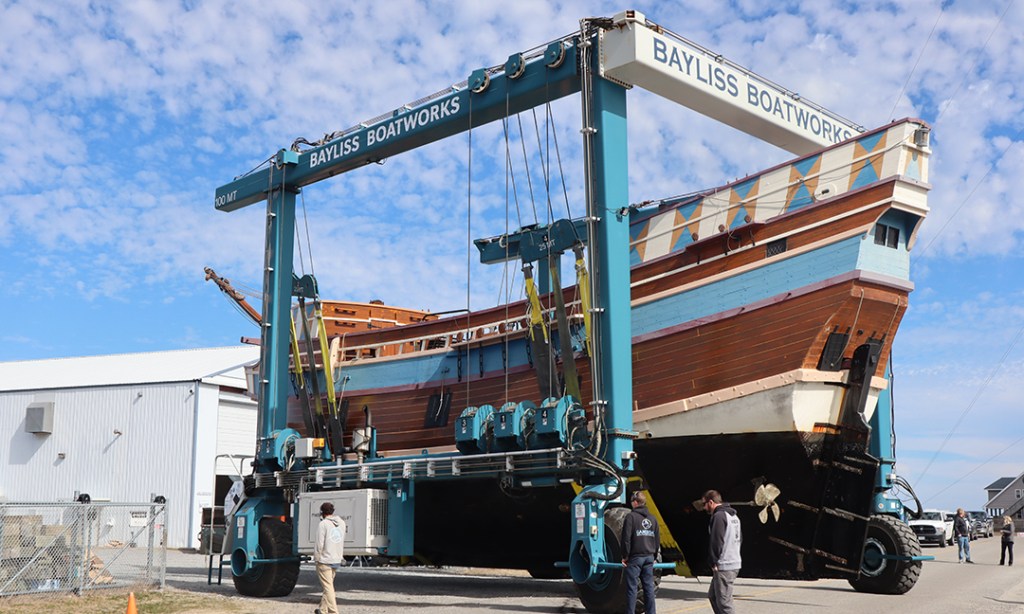 The Elizabeth II in the lift at Bayliss Boatworks for repairs and maintenance. Courtesy RIFP

The Elizabeth II sailed back home to Roanoke Island Festival Park in Manteo last week after annual scheduled maintenance below the waterline and plank repair. The general maintenance work was completed by RIFP staff after haul out at Bayliss Boatworks in Wanchese.

The maintenance was delayed this year due to insufficient water depth. According to Kim Sawyer, executive director at Roanoke Island Festival Park, Elizabeth II needs a depth of at least eight feet of water to get out of her berth, so they needed to wait until Dare County completed the dredging before haul out.

The county completed 2.2 miles of dredging through Shallowbag Bay, finishing up the three month project at the end of February. The dredging brought the water depth to nine feet; in some areas it was as shallow as one to two feet. According to Dorothy Hester, public information officer for Dare County, dredging is a priority for the county for safe navigation of the waterways. The current project brought much needed access for all vessels to the Town of Manteo. 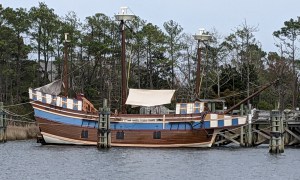 The EIlzabeth II back at Roanoke Island Festival park after the completion of maintenance work. Theresa Schneider photo

Fans of the Elizabeth II welcomed her back when she could safely return to Festival Park. The wooden vessel, representative of a sixteenth century vessel, was built in 1983 in Manteo at the Creef Boathouse, which is now home of the Roanoke Island Maritime Museum. Elizabeth II’s design was inspired by the Elizabeth, an English merchant ship that sailed to Roanoke Island in 1585 along with seven other ships.

Visitors to Roanoke Island Festival Park can climb aboard the top deck of the ship and tour the 25-acre property and experience what life was like for the first English settlers. Group and school tours are available to take guests through American Indian Town, which represents a Native community as it may have existed when settlers were exploring the region, as well as the Settlement Site, which demonstrates daily life events including woodworking, blacksmithing and Elizabethan games.

Festival Park also offers an interactive Adventure Museum and a traveling exhibit space. The current exhibit, “Look Again: Discovering Historical Photos,” is on loan from the Museum of the Albemarle and will be on display until June 26.

For more information, visit online at roanokeisland.com or call 252-423-5200. The park is open Tuesday to Saturday from 9 a.m. to 5 p.m. Admission is $11 for adults; $8 for children ages 3-17; free for children two and under. Group discounts and memberships available.