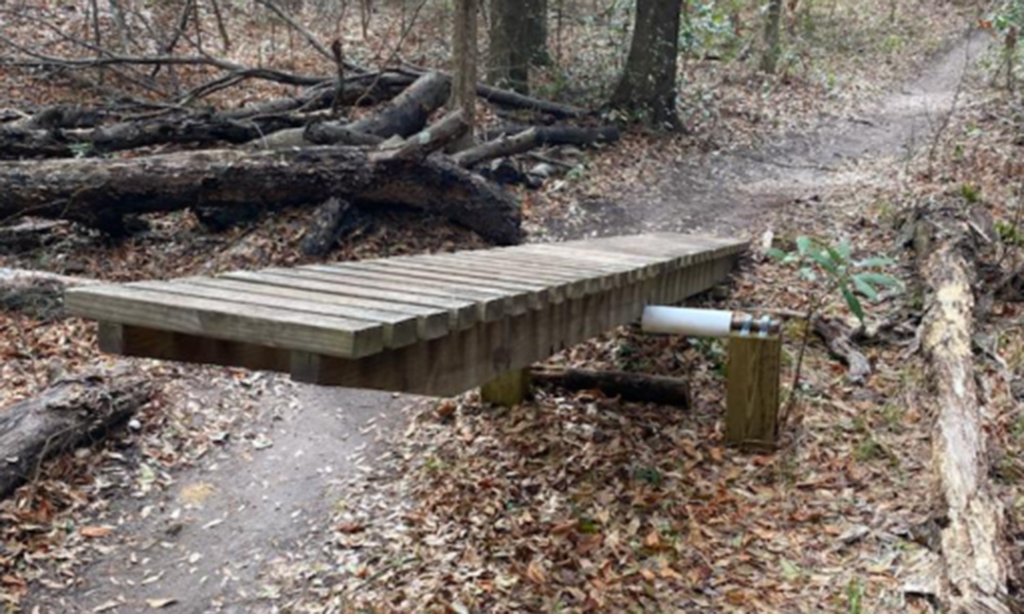 During a presentation on land management of trails, Kitty Hawk Mayor Gary Perry provided photos of holes dug and ramps as examples of what should not be allowed on conservation land. Town of Kitty Hawk photo

During the April 6 Kitty Hawk Town Council meeting, Mayor Gary Perry advised that an agreement has been reached for construction of a southern crossover access to Kitty Hawk Woods to begin Monday.

An area of just over 460 acres of vacant land is owned by Kitty Hawk and managed by N.C. Coastal Reserve. For many years, the site has been considered an excellent location for hiking, biking and equestrian use, although access has been primarily from Birch Lane Trail close to Walmart since other sections are bordered by private property and impassable marsh.

In recent months it was decided that a connector trail from Dare County’s Kitty Hawk Park at 900 West Kitty Hawk Road over the marsh into Kitty Hawk Woods would open the area to greater access and earlier this year grant money became available to develop the proposed connection. Soon after, however, it was learned that N.C. Coastal Reserve had posted signs prohibiting mountain biking there even though mountain bike use on the Kitty Hawk Woods trail has been a historic occurrence.

When contacted following the March meeting, Christy Simmons, public information officer for the N.C. Division of Coastal Management, advised that “It was not the intent of the N.C. Division of Coastal Management to restrict mountain biking or other trail usage at Kitty Hawk Woods Reserve in response to the proposed connector trail. The intent was to discuss the environmental impact of the connector trail and the potential for use conflicts based on the existing 1998 management plan.”

It was also noted that the “No Biking” signs were placed on a single tract at Kitty Hawk Woods Reserve where there was unauthorized trail building, tree cutting, hole digging and ramp building in the reserve. The signs went up in order to protect habitat and cultural resources.

At Monday’s meeting, Perry said after looking at the property he had some of the same concerns as the conservation group.

Providing photos of both private and state owned property, Perry emphasized construction of ramps and holes dug in trails would not be allowed.

“What is not going to be allowed,” explained Perry, “is using chain saws and axes to cut trees and make ramps for jumping. And digging holes is dangerous. Trees do fall across paths and they should be cleared, but we don’t want to allow all these other things. These pictures are what we really do not want to happen.”

Perry went on to say the goal is to provide and maintain a trail usable by all that is a nice place to go but the management plan in existence depends on a lot of volunteers.

Providing some additional history for the area, Perry said Kitty Hawk Woods is not actually old growth. The site was owned by a timber company in the early 1900s and was logged from the sand dunes all the way to the sound between 1916 and 1918.

“It is not old growth,” Perry continued, “but we would like it to become old growth for future generations.”

In other business for the evening, council held a public hearing and set additional guidelines for outdoor events and gatherings that limit the maximum square footage and the number of temporary signs allowed. 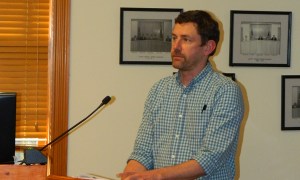 A second public hearing involved several zoning and planning related changes needed to be consistent and compliant with legislation passed by the General Assembly in 2019. According to Rob Testerman, director of planning and inspections, a new Chapter 160D was created by consolidating Chapters 153A and 160A into a single chapter and incorporating several other related sections previously spread throughout the general statutes.

Testerman said also that new definitions were added that will eliminate some decisions that previously were a judgment call by town staff.

The only new business item for the night was a building permit fee waiver request for a property in the 5100 block of Locust Court. According to the request, a Kitty Hawk family is planning to remodel their residence to make the home more accessible for their teen who was injured in a car accident. In approving the request, council noted that similar waivers have often been granted for hurricane related repairs.

Also approved was a resolution thanking Kitty Hawk citizens, businesses and town employees for their help during a pandemic that has claimed lives around the world. The resolution also declares May 9-15 as “Thanks, Outer Banks!” week, a combined First Flight, Kitty Hawk and Manteo Rotary Clubs and Outer Banks Hospital effort to showcase that the Outer Banks community through courage, compassion and strength in making it through the pandemic together.

The only public comments came from emails from Russ Eriksen and Emilie Klutz opposed to any Luke Street parking changes.

Perry advised that although Luke Street was once a paper street, it was paved for the express purpose of providing parking spaces. He went on to say that while the town is looking at options to add additional parking, there are no plans to make any changes this year.

The only other comment was also in email form from Jill Kramer asking that the law requiring beach canopies be enforced. Perry explained that the code is being enforced and that tents not properly removed are collected by Public Works and taken to recycling.

At the end of the evening’s business, council recessed until 9 a.m. Monday, April 26, for a budget workshop session.