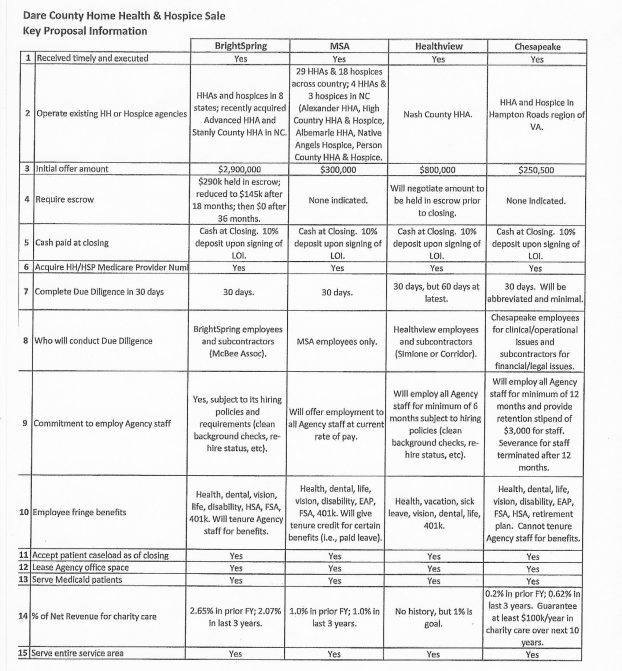 Information about each of the proposals received. Courtesy Dare County

At its April 7 meeting, the board selected BrightSpring’s non-binding Letter of Intent. The action facilitates the exchange of information between BrightSpring and Dare County and makes detailed discussions of the terms of a potential contract of sale possible.

County Manager Robert L. Outten reported that the commissioners had received copies of Offering Proposals from three corporations and one non-profit. He summarized the offerings of each proposal.

Outten stated a public hearing will be held about the results of the negotiations with BrightSpring. That hearing is tentatively set for Monday, April 19. County staff can postpone the hearing if negotiations are incomplete.

After the hearing, the commissioners can move forward with BrightSpring or select another applicant and repeat the negotiating process.

In his presentation, Outten refuted charges made during public comment. He said no decisions have been made. During negotiations, the proposal for employees will be looked at very carefully. All applicants will serve Medicaid patients.

Commissioners voiced strong support for making sure current employees are taken care of.

“I take offense at anyone who says I don’t care,” said commissioner Steve House.

County health director Sheila Davies, responding to questions from board Chairman Robert L. Woodard, said that staffing is a challenge. Because of short staffing, the program has turned away patients. To relieve the shortage, licensed practical nurses have been hired.

She confirmed the agency is still understaffed.

The agency currently has four registered nurses, two supervisors, three certified nursing assistants, one social worker and three office workers delivering home health and hospice services. Hospice also has a volunteer coordinator and volunteer chaplains and six fully vaccinated volunteers willing to go to patients’ homes. One volunteer is going to homes at the present time, as are chaplains. Facilities are not allowing hospice volunteers to visit at this time, reports the Public Health Division.

States push jobless from virus recession to return to work